Great news for Premium subscribers! In 2019, RotoGrinders Premium will be partnering with The Quant Edge for some fantastic NFL content! Aside from access to to their incredible Injury Impact Tool, we’ll be broadcasting each week with TQE analysts and bringing you data-focused information to help you build better lineups. STLCards & Eliot Crist will leverage tools on TQE & RG to deliver unique analytical approaches to breaking down the week in DFS. You won’t want to miss it.

In this how-to article, Eliot Crist of TQE will walk you through their Injury Tool and teach you how to quantify the impact of injuries from a statistical standpoint.

We at The Quant Edge are very excited to partner with RotoGrinders!

TQE is headed into its second football season after a very successful first season with a brand new website, never before seen tools, and an improved user experience. With over 30 tools, TQE has your DFS and sports betting needs covered. Our NFL model has picks and probabilities on every game and hit 59.7% of NFL picks in 2018, while hitting 66.7% of our best bets! The Quant Edge is the only place where you can customize a player’s performance and see his impact on the outcome before the game! The Quant Edge fantasy tools include optimizers, WR/CB matchups, head-to-head comparisons, pace, game script, weekly matchups, projections, expert rankings, ownership projections and our unique injury tool.

We are thrilled that we can bring our injury tool to a bigger audience by partnering with RotoGrinders! Here is how the tool works.

The Quant Edge has introduced a unique tool called the Injury Impact Tool before the 2018 NFL season, but how does it work? The idea behind the tool is to quantify a player’s value to both his team and other fantasy-relevant players. There is no sport where injuries have a bigger impact than football, but until now, case studies only looked at when players missed an entire game. At TheQuantEdge.com , we wanted to take it a step further and have our tool break everything down by snap. Every play from every team is broken down and quantified.

In 2018 Antonio Brown got hurt against the Patriots and missed multiple games. Prior to that injury, Brown had only missed one game since 2012. An Antonio Brown injury had a significant impact on the Steelers, but there was no way to quantify its impact on the team — now there is thanks to The Quant Edge. 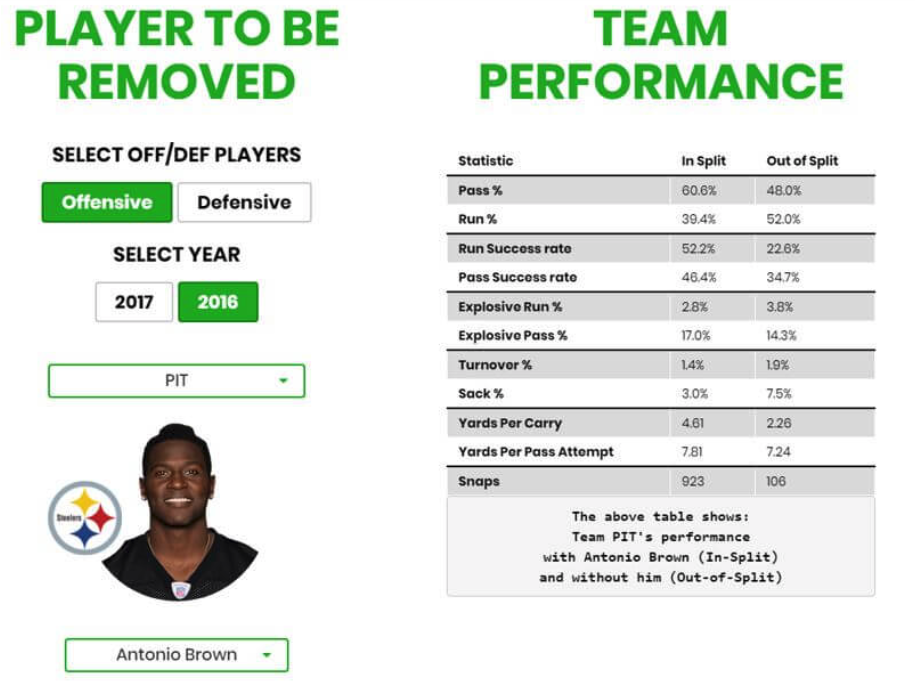 How the Tool Works

When you open up the tool, you simply click on the ‘offense’ or ‘defense’ button to decide which side of the ball you want to search. Every player on every team is listed. Selecting a player will change the splits chart on the right. ‘In split’ is when the chosen player is on the field, and ‘out of split’ is when the player is off the field.

Run Percentage – The opposite of pass percentage, run percentage, is how often a team ran the football when a player was in the game. In 2017, when Marshawn Lynch was on the field for the Raiders, they ran the ball 52.3 percent of the time compared to just 29.3 percent when he was off the field. If Lynch were injured, the team’s balanced attack would likely be unsustainable.

Run Success Rate – The rate at which a team had successful runs when a player was on the field. This metric goes well beyond whether a running back is on or off the field since every player plays a role in the potential success rate of a running back. It could be an offensive lineman who is the key to success, a receiver who the defense focuses on and keeps fewer men in the box, or a quarterback who can keep it on a zone read and open more lanes for a running back. There are countless reasons a player can help a running game, but Run Success Rate helps quantify them. In 2017, when Deshaun Watson was on the field, the Houston Texans had a Run Success Rate of 50.5 percent, compared to just 37.5 percent when he was off the field.

Explosive Play – Any play that goes for 15 or more yards.

Explosive Run Percentage – The percentage of a team’s runs that go for 15 or more yards. This helps us quantify how players impact potential big runs. In 2017, Kenyan Drake took over for the Dolphins and the team’s explosive run percentage shot up from 2.8 percent without him off the field to 6.1 percent with him on the field.

Explosive Pass Percentage – The percentage of a team’s passes that go for 15 or more yards. Same as run plays, this metric helps quantify a player’s impact on passing plays that pick up big chunks of yardage. In 2017, Patrick Peterson only missed 70 snaps on the season, but on those plays, the explosive pass percentage against the Cardinals jumped by over five percent.

Yards Per Carry – The total yards a team gains running the ball divided by the number of carries. This is one of the oldest efficiency stats there is. In 2017, the Bills averaged 4.39 yards per carry when offensive tackle Cordy Glenn was on the field, compared to 4.05 yards when he was off the field.

Yards Per Attempt – The total yards a team gains passing divided by the number of pass attempts. One of the best metrics available for measuring the efficiency of a passing offense. In 2017, when Tyreek Hill was on the field for the Chiefs, they averaged 8.37 yards per attempt compared to just 7.53 yards per attempt when he was off the field.

Snaps – This is the sample size of each split. A snap is counted as any play where the result on the field counted. An example of a play that would not count towards the split is a pass completion called back due to offensive holding.

Note: Applying common sense is very important when interpreting any metric. You need to look at the sample size and take the general context into account for each statistic. For example, if a player is a goal-line back, the offense is going to average fewer yards per play when he is on the field because there is less yardage to be gained, since every yard is tougher to get the closer you get to the goal line.

All the metrics in TQE’s Injury Impact Tool can be viewed with a simple visual to help you understand a player’s impact. Simply select your desired metric and the data visualization will appear. 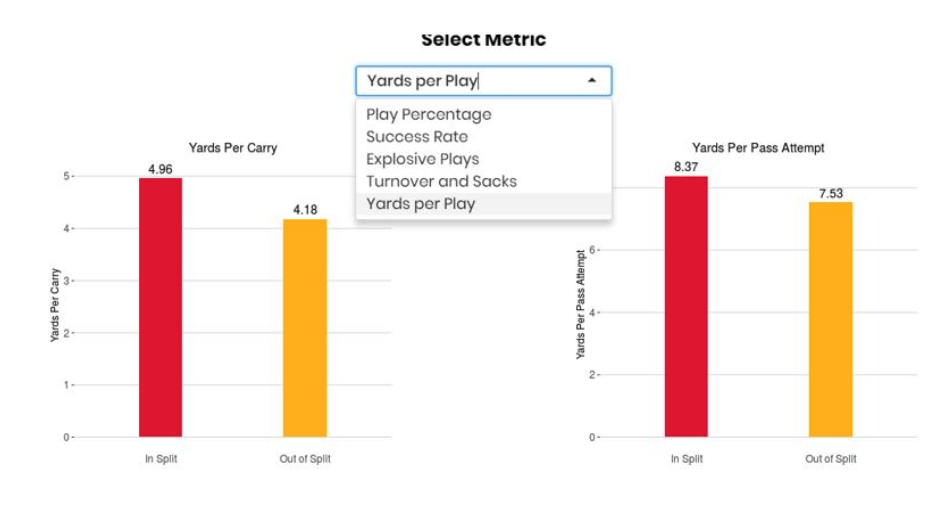 Not only can you see how a player impacts his team, but you can get an in-depth view of how any offensive player impacts any fantasy-relevant player. A fantasy-relevant player is viewed as any quarterback, running back, wide receiver, or tight end. To see the impact of your player on another player’s performance, simply select the position of the other player to review data not available anywhere else. 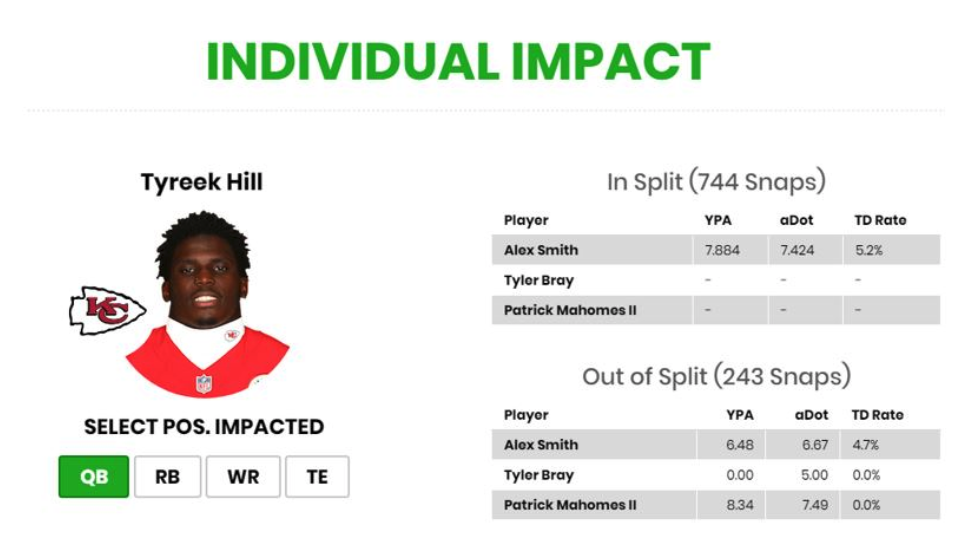 aDot – Average Depth of Target is the total air yards divided by the number of targets. ‘Air yards’ is how many yards downfield the receiver is when he is targeted.

TD Rate – The percentage of plays that result in a touchdown. 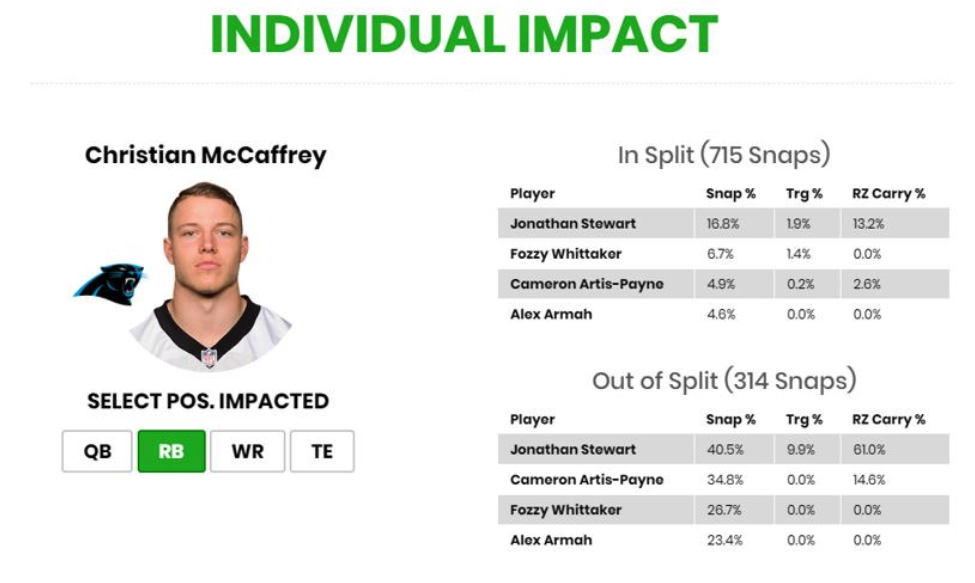 Snap Percentage – The number of snaps played divided by the team’s total number of plays. Running back fantasy points are highly correlated with volume. The more time a player spends on the field, the more opportunities he is likely to get, and the more fantasy points he is likely to earn. If a running back gets injured, Snap Percentage will help you determine whether his team will turn to one guy to replace him or try to replace him with a committee.

Target Percentage – The number of targets a player receives divided by the total number of team targets. This helps determine whether a running back playing the pass-catching back role.

RedZone Carry Percentage – The number of a player’s carries inside the opponent’s 20-yard line divided by the total number of team carries inside the opponent’s 20-yard line. Since a back is more likely to score the closer the team is to the goal line, this metric helps you get as clear a picture of that opportunity as possible. 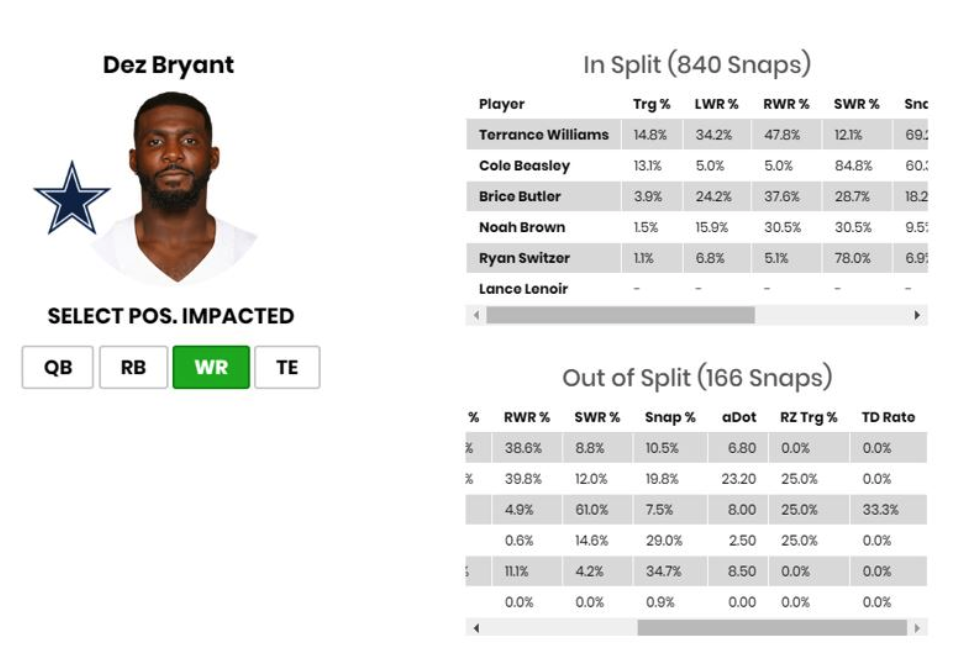 Target Percentage – The number of targets a player receives divided by the total number of team passes. Adjusting for who is likely to get the most targets when another receiver is injured can make all the difference in fantasy.

Position Percentage – The percentage a player lines up at respective positions

Snap Percentage – The number of snaps a player is on the field, divided by the total number of team plays.

aDot – Average Depth of Target is the total air yards divided by the number of targets. ‘Air yards’ is how many yards downfield the receiver is when he is targeted.

RedZone Target Percentage – The number of targets a receiver gets divided by the team’s total number of RedZone passes.

TD Rate – The percentage of plays that result in a touchdown for the player.

When injuries happen, you can now use the TQE Injury Impact Tool to help determine what actions – if any – should be taken with the player missing from action. Take advantage of this tool by leveraging the power of RotoGrinders Premium, and by accessing the available tools and information at TheQuantEdge.com. The combination of deep analytical and DFS insight available is enough to power a successful 2019 NFL DFS season.