Hopefully everyone had a great Thanksgiving weekend. We were treated to pretty much non-stop football since Thursday afternoon, and after an interesting Turkey Day slate, NFL Week 13 is finally in the books as well. For the first time this season, the weather played a major factor in DFS decision-making in several spots this week, including plenty of wind and even some snow.

Some quick takeaways from the weekend, 1) We will not have team go 0-16 this season thanks to Cincinnati’s win over the New York Jets, 2) The panic bus is gaining plenty of momentum in Philly, 3) Lamar Jackson is must-see TV, 4) As a Mizzou alum, it was nice to see Drew Lock pick up his first career win as a starting quarterback, 5) Figuring out where the Tampa Bay touchdowns will come from each week is extremely tilting. 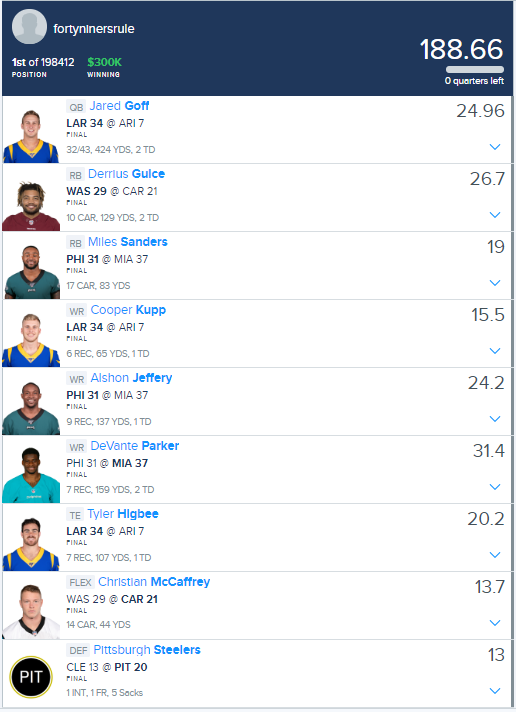 Even though San Francisco lost to Baltimore and this lineup didn’t use a single player from the 49ers, user Fortyninersrule still managed to “salvage” the holiday weekend by taking down the FanDuel Sunday Million GPP and the $300K first-place prize. The lineup leveraged the poor recent play from Jared Goff as he erupted for 424 yards and a pair of touchdowns at just 4.4% ownership. This lineup paired him with the two receivers of those touchdowns in Cooper Kupp and Tyler Higbee. Rounding out the LA stack were huge performances from value running backs Derrius Guice and Miles Sanders as well as DeVante Parker and Alshon Jeffrey. In fact, the lowest scoring offensive player on this roster was none other than Christian McCaffrey. Impressive lineup and impressive win. Congrats! 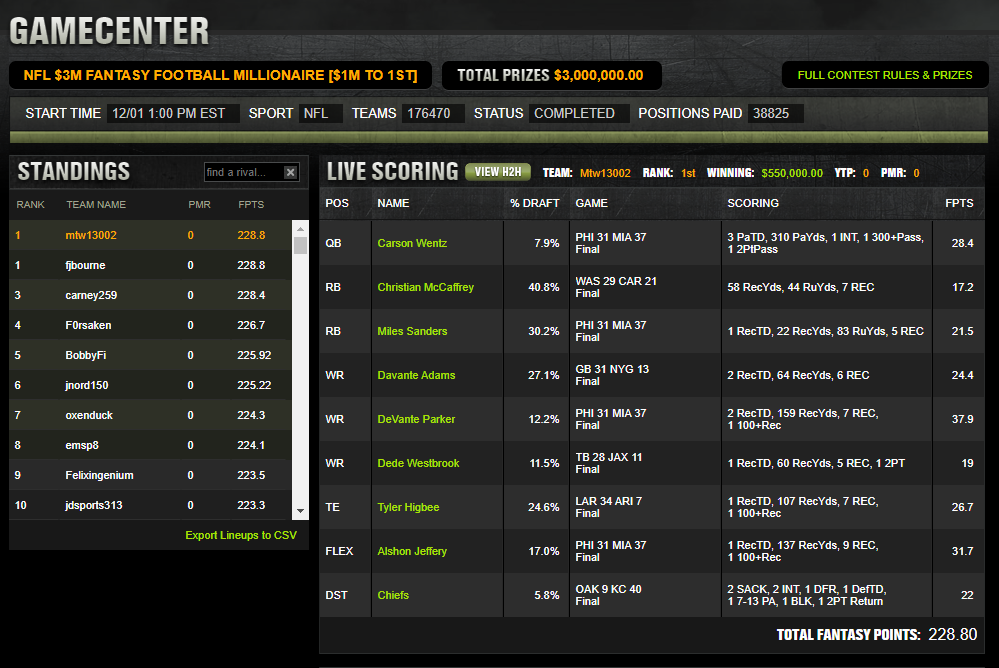 The newest DFS Millionaire is mtw13002! Despite the horrendous outcome for the Philadelphia Eagles this weekend, mtw13002 still managed to ride a Carson Wentz, Miles Sanders and Alshon Jeffrey stack to the promised land. This lineup “ran it back” with DeVante Parker and his 159 yards and two touchdowns on the Miami side of this game. Rounding out the million-dollar lineup were big games from Davante Adams, Dede Westbrook, Tyler Higbee and the Chiefs D/ST. Oddly enough, Christian McCaffrey found his way onto this winning lineup as well even though his performance lacked the punch we’ve seen in recent weeks. Congratulations on the life-changing victory!

Congratulations to all of the winners on putting a nice ribbon on the holiday weekend! We’ll see everyone back for Week 14!