When it looked like Team RG was basically out of the competition, we rallied with two straight wins. We are now in second place with three nights to go, five points behind Linestar. Tonight’s slate should be a fun one. There are a ton of different superstars in action with a number of great value plays as well. 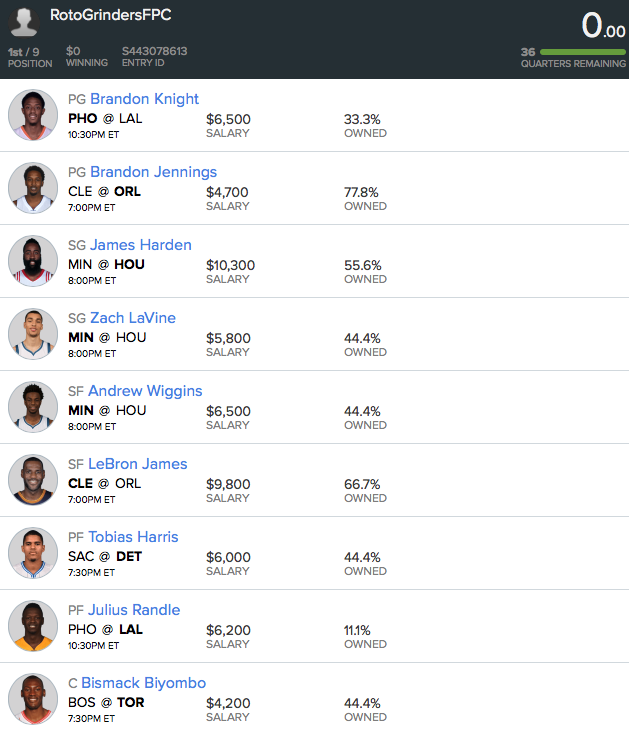 Brandon Knight: $6,500 – I can’t count how many different point guards I had in my lineup throughout the day. Westbrook, Curry, Lillard, Jennings, Joseph, and Frazier were all locked in at some point or another. Once I found at that Kyle Lowry was playing and that Toney Douglas was starting, I decided to get off of Cory Joseph and Tim Frazier. I wanted some exposure to the Suns against the Lakers and Knight seemed a little too cheap given his recent playing time.

James Harden: $10,300 – Harden was a must for me today. The Rockets are fighting for their playoff lives, they are coming off of an embarrassing loss, they have a nice matchup against the Wolves, and they are playing at home. If you need more explanation than that, then how about the fact that Harden should play 40+ minutes? I was happy to see that he was only 55% owned.

Andrew Wiggins: $6,500 – In the Grind Down, I mentioned that I liked Zach LaVine over Wiggins. You may be asking, then why did you take Wiggins? Well, first off, I took LaVine as well. And second, small forward was a crapshoot tonight. Kevin Durant found himself in a potential blowout situation and after the top guys, there were some risks attached to the other options at the position.

Tobias Harris: $6,000 – I always love targeting players against the Kings. They are ranked dead last in points allowed per game and they play at a faster pace than any other team in the NBA. Outside of the one bad game against the Wizards, Harris has really played well recently. He should benefit from an uptempo game against a team that does not defend well in transition (or in the half court for that matter).

Bismack Biyombo: $4,200 – Valanciunas was questionable all day. Then he was active. Then he was active, but not expected to play. It was a roller coaster, but we finally got to get back on the Biyombo train. He is coming off of a huge outing against the Pacers last night. While I don’t expect a repeat performance, he offers a high floor and a high ceiling at a price of only $4,200. He also draws a nice matchup against the Celtics.