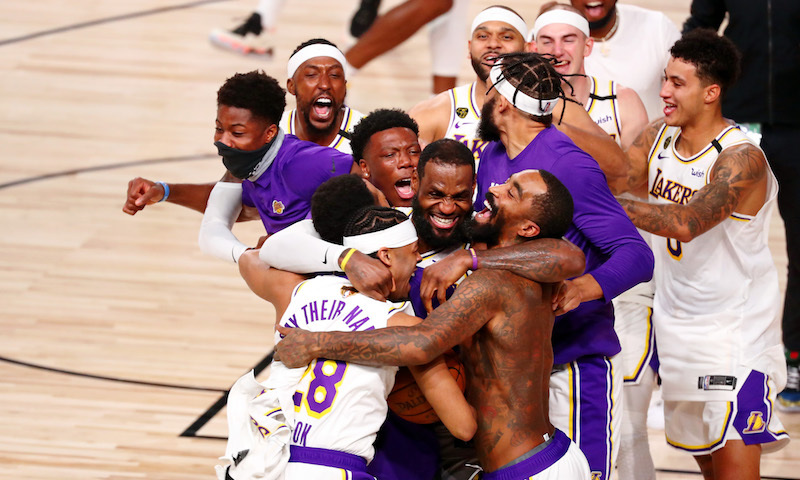 In this article, we are going to talk about the defending NBA champions: the Los Angeles Lakers. What did their offseason look like? And do those moves bode well for their chances of repeating? (or winning the West…or winning a certain amount of regular season games…hint hint)

All we care about here is what the on-court product is going to look like for the upcoming 2020-21 season, which is set to tip off on Dec. 22. I won’t be diving into their use of the salary cap, current/future draft picks, luxury tax, etc. Do you think they overpaid for Kentavious Caldwell-Pope when re-signing him to a three-year, $40 million deal? Do you think Dennis Schroder wasn’t worth Danny Green and a first round pick?

That’s all fine and good if you do, but what’s done is done. Unless Rob Pelinka has any more tricks up his sleeve, we know what this roster is going to look like for the 2020-21 season. So, let’s talk about it!

If we look at all of these moves in the aggregate, pessimists would argue that it didn’t move the needle much and optimists would say that they enter the upcoming season with a much better team. For me, I am certainly lean more towards the latter. What I don’t think anyone can say, though, is that this team is a worse version of last year’s team. And that is why you see them as the pretty clear favorite to defend their NBA title no matter which sportsbook you visit.

Swapping out a Howard/McGee center combo for Gasol/Harrell is undoubtedly a huge plus. I feel the same way if you look at Rondo for Schroder. Looking at the wing may be the only real argument to be made for a “loss”, but that is more in quantity as opposed to quality.

Out are Avery Bradley, Danny Green, Dion Waiters (currently an unrestricted free agent), and JR Smith (also a UFA), but the latter two weren’t even really a part of Frank Vogel’s main rotation. And while the only marquee offseason signing on the wing was Wesley Matthews, they also brought in Alfonzo McKinnie (via trade) for some added wing depth. Furthermore, the organization continues to be extremely high on Talen Horton-Tucker, so don’t be surprised if he fights for meaningful minutes this season too. Let’s not forget that guys like Schroder, Alex Caruso, KCP, LeBron James (I heard he’s good at basketball) can play a bunch of different positions, so it’s not like the defending champs are going to be hurting for capable players on the wing.

Dennis Schroder and Montrezl Harrell were arguably the two biggest offseason additions for the Lakers, as those two guys also just so happened to lead the NBA in points per game off the bench last season. How Vogel plans to utilize them this season remains to be seen, but they will obviously both be a part of the regular rotation.

Where I think those two will come in the handiest is being able to create offense for this Lakers team when LeBron is off of the court. As you can see from that link, the Lakers had a 112.1 offensive rating last season when LeBron was ON and just a 105.2 offensive rating when LeBron was OFF. I would love to see some AD/Schroder/Harrell minutes together while LeBron is getting a breather. That is easily an upgrade on offense compared to anything they rolled out last season while LeBron was resting.

The other two key offseason additions, Marc Gasol and Wesley Matthews, are far more likely to help the Lakers on the defensive end of the court. In Matthews’s 24.4 minutes per game last season, the Milwaukee Bucks had a 98.3 defensive rating. That ranked second in the entire league. Who was third? Marc Gasol, of course! In his 26.4 minutes per game with the Raptors last year, they had a 98.9 defensive rating. So what I see here is a top three defense in the league last year that arguably got even better on that end (Gasol and Matthews), while also adding some more scoring punch with the other two guys (Schroder and Harrell).

If you want to play devil’s advocate, you would say that Gasol and Matthews are in their twilight years and were more aided by being on those respective TEAMS, who were great defensive units as a whole (e.g. the Bucks and Raptors were the only teams in the league last season who had a better defensive rating than the Lakers). And then you might say that Schroder and Harrell may add a bunch offensively, but is it enough for what they might give up defensively? In my opinion, those would all be perfectly viable points. But since these guys are also only just asked to play supporting roles to LeBron James and Anthony Davis, I think this is clearly an upgraded version of the Lakers.

So how does all of this fit into our NBA betting forecasts and futures bets?

How to Bet on the Lakers This Season

As I alluded to at the beginning, the Lakers are clear favorites to win both the Western Conference and the NBA title. As a result, you aren’t exactly getting great odds if you want to take either of those bets. And while I wouldn’t blame anyone who wants to fire off a few wagers on those odds, I personally prefer to hunt for a little more value in my futures bets.

Before I get to my favorite Lakers bet for this upcoming season, I think we need to discuss their OVER/UNDER on regular season wins. PointsBet currently has the line set at 48.0, which is the second highest behind only the 49.0 of the Milwaukee Bucks (remember, 72-game regular season this year people!). So to hit that over, you need the Lakers to go at least 49-23. I see this being a pretty efficient line and honestly don’t love either side of it. But let’s still discuss the two different schools of thought.

The case for the under is that this team will be starting training camp less than two months after winning the most recent NBA Finals. What are LeBron’s thoughts on such a short offseason? Facepalm! While that had guys like Danny Green (while he was still with the Lakers) saying, “I wouldn’t expect to see him (LeBron) probably the first month of the season”, I think the more likely scenario is that LeBron, AD, and the Lakers use the first month of the season as one long ramp to ease them back into things. So getting a less than 100% version of this Lakers squad, especially early in the season, would be pretty solid grounds to bet Under 48 wins.

The case for the over though could be a handful of different things. For one, when does LeBron ever really take games off? Everyone thought that he was going to ease back into the seeding games in the bubble too, and here were his minutes, in chronological order, in the first six games he played:

The dude is a machine! No athlete takes care of their body the way this guy does. I think it’d be foolish to assume otherwise for this season too.

And even if for some reason LeBron is handled with kid gloves by the Lakers in the first month or so, you can make the argument that their additions of Schroder and Harrell can help stem the tide on offense in those games/minutes LeBron isn’t out there. Throw in the sudden stability that this organization has shown over the past year, and they seem like the kind of team that is well suited to handle the quick turnaround.

If I am forced to choose one side, I’d probably take the Under and just bet on all of the uncertainty and unknowns winning out. But boy would that be a hard bet to place. Personally, I’m avoiding it altogether.

What would I take instead? Well, here’s one out of left field: Anthony Davis to win Defensive Player of the Year at +350 at BetMGM!

One stat that might have ultimately hurt Anthony Davis last year when it came to awards was that the Lakers actually had a slightly better Net Rating when he was off the court (6.1) than when he was on the court (5.0). We know better than to put too much stock into that statistic. Of course the Lakers are better when AD is out there!

This could be nothing more than AD being a circumstance of the rotation he plays. Below is a screenshot from our GameFlow Tracker tool, which shows a game against the 76ers back on March 3, 2020. 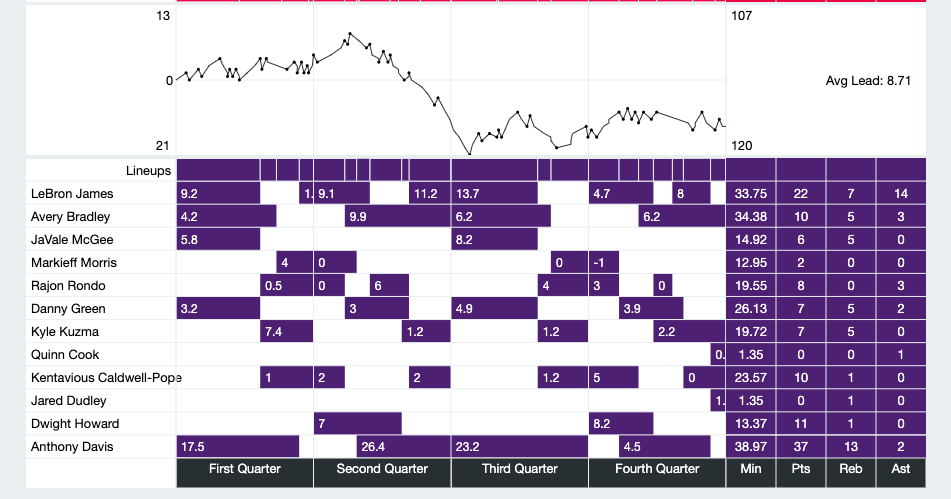 Like most games, LeBron would get an earlier break in the first and third quarters, while AD would stay out there for (just about) the entirety of the first and third quarters. So you see a bunch of lineup combinations there where it is AD + four reserves. AD is obviously a freak of nature when you combine his athletic ability, size, and skills, but even he is going to have a hard time when he is out there with the likes of Markieff Morris, Kyle Kuzma, Rajon Rondo, and Kentavious Caldwell-Pope. I think those minutes added up enough to where the on/off numbers (from a Net Rating standpoint) were very skewed.

With what the Lakers did in the offseason, I think some of AD’s analytics are going to look much prettier this season, and thus, perfectly fit the narrative of what we already see with our eyes. And that is the guy is an absolute beast on the defensive end of the court. He can basically guard every position on the court, one through five. He can drop on the pick-and-roll if you want. He can be a part of a switching system. He will make things difficult on a guard if he gets switched out on a pick-and-roll. He will make it extremely difficult for you to score at the rim. He is pretty much the prototype of what you want on the defensive end in the NBA.

With Giannis taking home the award last season, I think it is AD’s turn this season. I’ll take my chances at +350!