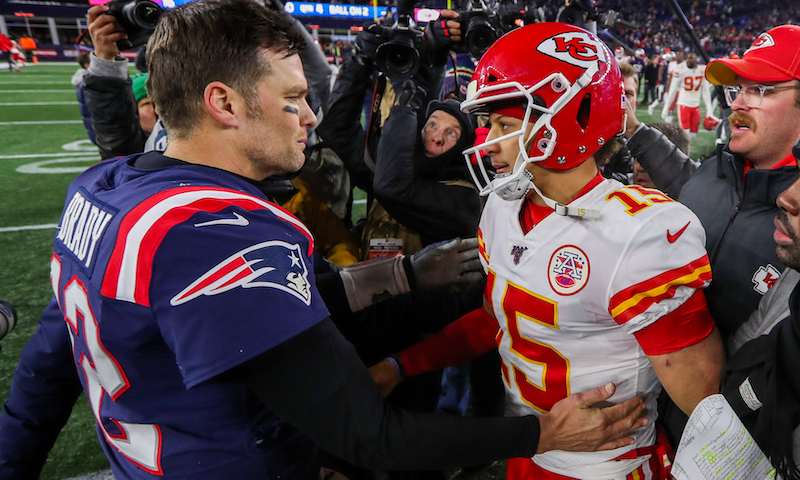 For much of the last two decades, Bill Belichick and Tom Brady’s Patriots dominated bookies as much as they did their opponents. From 2003 through 2019, the Patriots went 181-125-8 against the spread, cashing bets at an absurd 59% clip. Eight of those losses came in Brady’s last season as a Patriot, making it only the fourth season since 2004 that New England backers didn’t see a positive ROI. But while oddsmakers were finally getting the Patriots right, they were losing sight of the Kansas City Chiefs who, with Patrick Mahomes behind center, are set to be not only the next great NFL dynasty — but possibly the next profitable sports betting dynasty?

In 2019 the Chiefs covered 72% of spreads on the way to the franchise’s first Super Bowl win. But Mahomes, who won NFL MVP as a 50-1 longshot in 2018, was already printing cash for bettors.

Since his first career start in Week 17 of 2017, Mahomes is 27-12-1 against the spread. According to Doug Kezerian, host of ESPN’s Daily Wager, that’s the third-best mark ATS from an NFL quarterback in the Super Bowl era. The next best? Teddy Bridgewater and Shaun Hill.

Now 25, everyone is aware Mahomes is the new chief in town. Some might go as far to say it’s why Brady left the AFC.

Whether Mahomes will match or exceed Brady’s four MVPs and six Super Bowl titles is fun to ponder, but it’s often difficult to find value in short futures odds. There’s a more important question for bettors: will Mahomes and the Chiefs continue to cover the spread?

Conventional wisdom says no: NFL lines are as efficient as they get, and though late to the Mahomes party like everyone else, oddsmakers have arrived with their adjustments, nulling the short term betting opportunity.

Not even two weeks ago, the Chiefs closed as 3.5-point underdogs ahead of their Monday Night Football matchup in Baltimore.

Yes. Despite having won 11 consecutive games, and covering the spread in nine of them, Patrick Mahomes and the defending Super Bowl champs were +155 moneyline underdogs and getting 3.5 points while playing inside a fan-less stadium.

That didn’t scare bettors away from backing the Ravens, who entered the game as slight Super Bowl favorites. At one point, 62% of bets were on the Ravens, per ScoresAndOdds.

Kansas City scored 27 points in the first half, and Mahomes ended the game with 385 passing yards, four touchdowns through the air plus another with his legs, as the Chiefs dominated the Ravens from start to finish in a 34-20 road win.

Of course, many did know better. Rob Pizzola, a professional sports bettor from Toronto, said it best:

I will cherish every one of these Mahomes as an underdog moments because we may not even get a half dozen of them this decade.

Imagine laying points against the best quarterback we have ever seen.

Following the most impressive performance of the season, the Chiefs gave 10.5 points to the New England Patriots in Week 4. Mahomes didn’t look great, at least not by his standards, yet the Chiefs covered for bettors again.

Speaking as a guest on Daily Wager, professional sports bettor and ESPN sports betting analyst, Preston Johnson, projected the Chiefs to be favored in all 12 of their remaining games, nine of them by at least a touchdown.

Making Super Bowl predictions in August, I speculated that it might be the last opportunity to find 7-to-1 odds on Chiefs futures. After all, the Patriots entered multiple seasons as 3.5-to-1 to 5-to-1 favorites to win the Super Bowl during Brady’s heyday. The Chiefs are now +333 to win Super Bowl 55 at FOX Bet. In the age of COVID-19, that’s too short my betting appetite; however, betting on Mahomes against the spread has become a staple in my diet. But eventually, something has to give, doesn’t it?

How High is Mahomes’ Peak?

Conventional wisdom is right that oddsmakers have adjusted, but if New England from 2003-19 is a blueprint, then Kansas City might be home to a new print factory and Mahomes its CEO.

Using past performances and historical data to open weekly NFL betting lines, oddsmakers are always adapting, but are they considering players’ future potential and upward trajectory? If not, might this be why Brady and several other greats were profitable for so long, and what does it mean if Mahomes hasn’t even peaked?

In 2019, Mahomes regressed statistically from his MVP season, but he almost certainly became a better quarterback with more experience.

Appearing on HBO’s The Shop during the offseason, Mahomes suggested as much, saying he couldn’t really read defenses until “halfway through last year.”

“I understood coverages but how to be able to pick up little tendencies defenses do, stuff that Brady and them have done, they know it, and they just do it,” Mahomes said.

He was “just playing” his way to a half-billion-dollar contract.

It’s no surprise that Mahomes thinks he can improve. The best competitors are never satisfied, often to the point of delusion, but Mahomes’ case is compelling.

“The more experience and the more I learn then I’ll be able to go out there and call plays and do all that different stuff because I’ve seen it. I still think there’s a long way for me to go there. I think mentally I can get a lot better,” Mahomes said. “Physically, I’ve done a lot of stuff, I always work on my fundamentals. But mentally, I can still take my game to a whole other level.”

If you need a reason to believe him, consider the fact that Mahomes added an MVP, Lombardi Trophy, and a Super Bowl MVP to his Wiki page at a younger age than Aaron Rodgers was when he took over the Packers.

Speaking of Rodgers, Mahomes has joined the Green Bay quarterback as one of the most opportunistic quarterbacks in finding “free plays.” In 2018, Mahomes racked up 234 yards on nine completions while drawing defenses offside for 15 free plays, in which he connected with receivers nine times.

Aaron Rodgers is a cheat code (on free plays)

Mahomes was back at it in Week 1.

Watching Texans/Chiefs AFC Divisional Round highlights. Can we talk about how ridiculous this Mahomes throw is on a free play? pic.twitter.com/SrikYqGDHu

By comparison, Kirk Cousins had only thrown 13 career passes off free plays as of last November. Peyton Manning did so only 17 times throughout his Hall-of-Fame career.

As Mahomes continues to fine-tune this skill, he’ll find either more freerolls to take advantage of or more time in the pocket if pass rushers become too worried about jumping offside to beat his protection off the snap. In fact, out of current NFL starting quarterbacks, Mahomes and Rodgers have been sacked a league-low three times through four weeks. That’s not a coincidence.

Moreover, it makes intuitive sense that great quarterbacks — the Bradys, Rodgers, Mannings and Mahomes of the world — improve faster and longer into their careers than average quarterbacks. It’d also help explain why these quarterbacks and their teams, Tom Brady and the Patriots being the most notable but not the only example, stayed a step ahead of the betting market.

During the Rodgers era, the Packers are the second-most profitable team behind the Patriots, covering 57.4% of the time.

Similarly, with Manning and Andrew Luck taking the majority of snaps, the Colts are 56% ATS since 2003.

While no other team has been as consistent as the Patriots, Packers, Colts and now the Chiefs, others have covered spread more than the 52.4% threshold required to beat the vig, i.e., the fee sportsbooks charge when accepting wagers.

The New Orleans Saints are 54.6% ATS since Brees moved to the bayou in 2006, while the Seahawks and Steelers are 54.1% and 52.8%, respectively, after drafting Russell Wilson and Ben Roethlisberger.

These stats don’t prove that betting on Mahomes will be a profitable long-term endeavor — not even close.

Betting markets aren’t merely a product of proprietary data sets and sophisticated algorithms with minor adjustments from oddsmakers. As Ed Miller explains in The Logic of Sports Betting, while we’re directly betting with sportsbooks, i.e., the market makers, we’re also indirectly betting against a mob of other bettors. There’s no larger mob than the NFL mob, and the spreads we bet against are a reflection of what the mob collectively thinks. Mahomes has put the mob on notice in a way that even Brady and Rodgers couldn’t.

So are the Chiefs the next sports betting dynasty or is the Great Kansas City Gold Rush nearing its end? Positing the question might answer itself. Or as Drake would say, if you’re reading this it’s too late.

As for what I think? I’m not so sure. I’ll look for spots like I did against the Texans, against the Ravens, and against the Patriots — listen to Drake and bet against Mahomes, however, I will not.