Lamar Jackson: Under 21.5 Total Fantasy Points: While the average score that Jackson will put up in this game will probably be over 21.5 points, the median score is likely to be under. While he put up an absolutely massive outing last weekend against the Dolphins, I don’t expect this to continue. Additionally, the game is currently at a 13 point spread right now, so there’s a decent chance that this game isn’t close going into halftime and Jackson may not end up even playing the whole game. Take the under here.

Kyler Murray: Under 18.5 Total Fantasy Points: While I do think that Murray is going to end up being a fantasy beast this season, this is not a good spot for him. The Ravens are one of the top defenses in the league this year, and this is a tough spot for a rookie making his second ever start (and on the road no less). Currently the Blitz has Murray projected for around 16 points in this matchup here and I think that he’s going to end up in that range around 7 out of 10 time (while he’ll probably end up in the 25 point range the other 3). Just take the under here and move on.

David Johnson: Under 17.5 Total Fantasy Points: While MKF is a full point PPR site and I would take the over on this question the far majority of the time, this is not a good matchup for DJ. As stated before, the Ravens are one of the top defenses in the league this year and will likely look to limit DJ in this matchup. Currently, the Cardinals are projected for 17.5 point this week, and while there are many situations where DJ ends up going for 30 points here, but the most likely scenario is under 17.5. 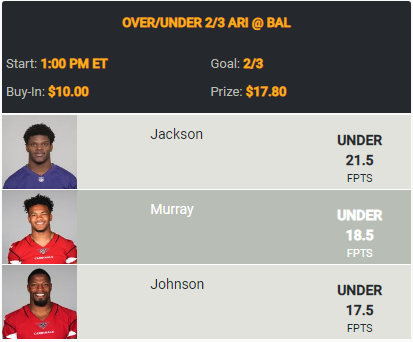 Ben Roethlisberger: Under 20.5 Total Fantasy Points: The current total for this game is sitting at 47, and this game will likely feature a whole lot of running in it. Yes, Roethlisberger is a great QB and yes the Seahawks did just give up a whole lot of passing yards to Andy Dalton, but 20.5 is a decently high number to hit in this game (especially after they just put up 3 points against the Pats last weekend). The Seahawks have a decent defense and should run the ball often and control the clock.

Russell Wilson: Under 19.5 Total Fantasy Points: Like I mentioned with Roethlisberger, the Seahawks should be running early and often in this game, and it is unlikely that Wilson throws the ball often enough for him to hit the over on this prop. 19.5 is a fairly high number for him, and the Blitz currently has him pegged for 17.5 in this matchup here. While Wilson absolutely has the ability to crush this number, the majority of the time he’s going to end a few points under it here. 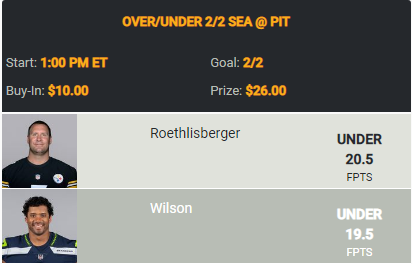 Mitch Trubiskey (+2.5) vs Joe Flacco: Total Passing Yards: This prop was one of the easier ones I’m seen for this weekend. Both these QB’s are complete trash (or at least look like it so far). The early Vegas passing props currently have Trubiskey pegged for 230 passing yards compared to Flacco who is sitting at 222. Right here you’re getting the guy with the better Vegas odds, in the better matchup, and your’e getting a few free yards here. Just take Trubiskey and move on.

Allen Robinson vs Emmanuel Sanders (+2.5): Total Receiving Yards: This ones another easy one here. Allen is a guy who’s going to get a more consistent amount of targets and the Vegas props support him. Currently, Vegas has Robinson pegged for 6 more yards than Sanders and I think that number is a bit too low. Robinson should end up crushing Sanders in this prop and I wouldn’t be surprised if Sanders fails to hit the 30 yard mark here against this Bears defense.

Phillip Lindsay (+3.5) vs David Montgomery: Total Rushing Yards: This prop is a great value here. Currently, the bears are doing a big RB by committee between Cohen, Davis and Montgomery, and it doesn’t look like Montgomery is going to get a whole lot of work. Currently, Montgomery is pegged for 39 yards by Vegas. Lindsay on the other hand is the main guy in this lineup here (although Freeman will steal some of his workload) and is pegged by Vegas for 48 yards. In this prop, you’re getting the guy who’s projected for more yards and he is getting a couple free ones. Lindsay is the obvious play here. 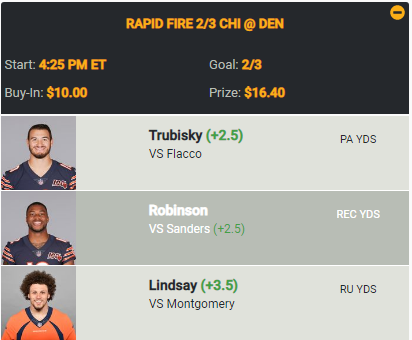