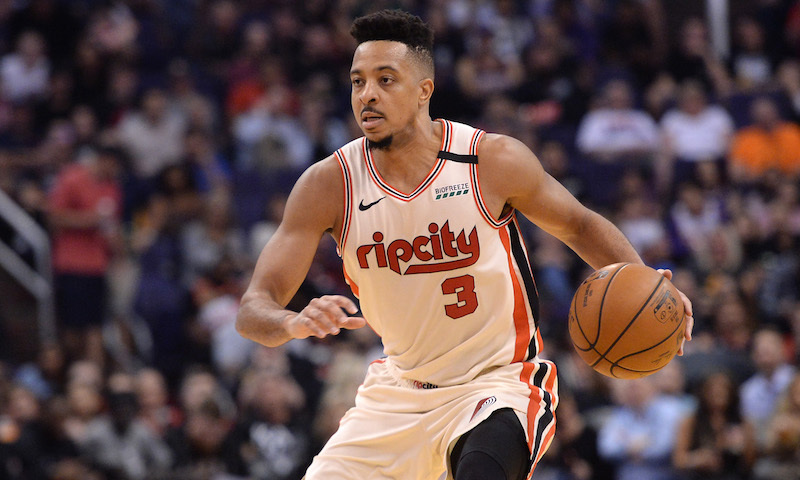 RotoGrinders expert Dan Gaspar, also known as MrTuttle05 in the DFS lobby, makes predictions and picks, from both a sports betting and NBA DFS perspective, for today’s five-game NBA slate.

Happy NBA Trade Deadline Day! We have already had plenty of action around the league with the Orlando Magic leading the way with three big trades involving Nikola Vucevic, Aaron Gordon, and Evan Fournier. I am writing this article with about three hours left until the trade deadline ends so there’s still a chance that tonight’s five-game slate gets flipped on its head by a major trade. As of now, here are the trades involving teams playing tonight.

None of the players involved in these trades will be active for tonight’s games.

No different than a slate full of injuries, Thursday’s trade deadline will leave a number of teams with temporarily thinned out rotations. Unless you are PJ Tucker, minutes = fantasy points, and players that remain on teams involved in trades could be in line for heavier minutes. Once again, here is a list of teams playing tonight that have been involved in a trade, but this time with potential DFS impacts.

Sacramento: While Nemanja Bjelica was sporadically in and out of Sacramento’s rotation, Cory Joseph was a key piece of their guard rotation, seeing anywhere from 20-30 minutes on a nightly basis. Joseph’s absence will have some impact on fringe rotation guys like Justin James and maybe even Kyle Guy but more importantly for DFS purposes should mean heavier minutes for De’Aaron Fox, Tyrese Haliburton, and Buddy Hield, even on the second night of a back-to-back. Fox has the biggest upside but Haliburton is my favorite target of the bunch thanks to his still too cheap price tag on both DraftKings ($6,000) and FanDuel ($5,700).

Portland: The absences of Rodney Hood and Gary Trent mean the Blazers will need to fill about 40 minutes from their typical rotation. That should be good news for Anfernee Simons who has been on the outside looking in. Simons could be worth as a value option in large-field tournaments as he’s priced at the absolute minimum across the industry. A thinned-out guard rotation also has me extremely interested in C.J. McCollum who is coming back from injury but played 38 minutes against the Nets on Tuesday. McCollum could be in line for heavy minutes once again and is too cheap for that size of a role.

Philadelphia: Terrance Ferguson wasn’t a part of the 76ers rotation but Tony Bradley has been a big piece, starting and seeing anywhere from 15-30 minutes on a nightly basis. Bradley’s absence should mean more minutes for Dwight Howard who is now one of the top point-per-dollar options on Thursday’s slate.

For more NBA tips, sign up for RotoGrinders Premium today!

CJ McCollum Over 20.5 Points (-121) – After averaging just 24 minutes per game in his first four games back from injury, McCollum played 38 minutes in Tuesday’s win against the Nets. Now with Hood and Trent out of the rotation, McCollum should be looking at big time minutes once again against the Heat on Thursday night. Prior to his injury, McCollum was having a career year, averaging 23.8 points per game. Current projections at RotoGrinders indicate there’s a lot of value on this current line with CJM projected for over 22.5 points in 35 minutes of action. Considering I think McCollum could see closer to 40 minutes of playing time, this line jumps out as too low.

[Bet Over 20.5 McCollum Points at BetMGM]