The Starting 5 series will provide Grinders a quick look at the day’s top positional plays, analyzed through the lens of one of our daily fantasy sports experts.

Welcome to another Monday edition of the Starting Five.

With this being a nine-game slate, there is going to be a fair amount of chalk today, but I want to turn your attention to a pivot at every position. Not every one of these guys will go off (if they did I would be in the Magic 8-Ball business) but rather are names you could use to give yourself a different lineup construction than the field. All prices/stats are focused on DraftKings.

With Giannis out, your first looks would be to Bledsoe and Middleton. After seeing the pricing you might be tempted to fade, but this is a great spot for Bledsoe to go for over 50 DK points. The Suns are giving up 48.75 DK points per game to point guards this season, and this is a classic revenge spot. Giannis actually sat out these teams’ first meeting this year, and Bledsoe played 45 minutes (40 regulation minutes and 5 more in OT) and put up 49.75 DK points. Using CourtIQ with Bledsoe on the floor and Giannis off, Bledsoe gets a 3% usage bump, and this will also be a pace-up spot for Milwaukee. So, despite the high price, don’t dismiss Bledsoe today.

Other Options: Malcolm Brogdon ($5,000) didn’t play in Saturday’s game against the 76ers due to personal reasons, but when he’s on the floor without Giannis he is seeing a 2.8% usage uptick this year, so he could be the sneaky Bucks play. If Mario Chalmers sits for the Grizzlies, Andrew Harrison ($3,900) will get all the minutes he can handle against the 76ers, who can give up a ton of points to point guards from time to time. 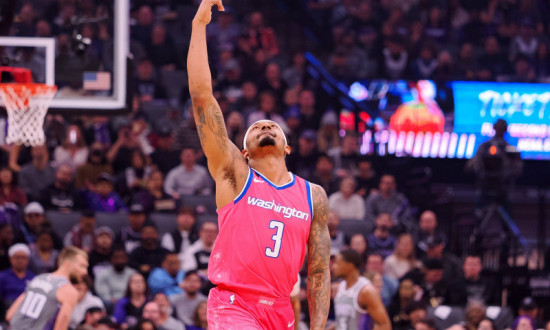 All the attention in this range will be on Bledsoe, Jrue Holiday and CJ McCollum, but Bradley Beal has a sneaky good matchup against the Mavericks, who have allowed scoring guards to have huge games against them. Dallas gave up 26 points to CJ McCollum on Saturday, 25 to Gary Harris, and 22 to Will Barton on Tuesday, and then a week ago Saturday they gave up 19 to Clarkson coming off the bench. Beal is better than all of these players, and if he gets into the 26-30 real-life point category, he starts presenting real upside at this $7.4K tag.

Other Options: Jrue Holiday ($7,200) squaring off against this brother in a pace-up game is interesting, as is Justin Holiday ($5,900) with Kris Dunn already ruled out for this game. Donovan Mitchell ($7,800) has to be one of the lowest owned 30% usage players in DFS history, and he has a good matchup against the pitiful Hawks tonight.

This play is dependent on Goran Dragic sitting, but if he does, everyone will go back to Wayne Ellington, who made value by shooting out of his mind (10-of-15 and 6-of-10 from three). He may be the mega chalk again, but CourtIQ tells us that it’s actually Josh Richardson that gets the biggest boost. With Dragic off the floor, Richardson gets a 9% usage bump and a 0.13 FP/min bump, whereas Ellington only gets 3.6% usage and 0.02 FP/min bumps. Should Dragic get ruled out today, be smart and go to Richardson. Don’t chase Ellington’s hot shooting performance.

Other Options: Otto Porter ($6,300) was staggered in their last game against Detroit, getting more minutes while leading the second unit and looking really good in the process. Nicolas Batum ($5,900) isn’t a spot I would normally chase, but he’s more talented than he’s led on all year, and against the Kings he has a high ceiling, so he’ll make my final list at worst. Any time Kent Bazemore ($5,500) gets under $6K, I get interested in a hurry, and at $5.5K he provides all sort of GPP-winning upside. Robert Covington finally had a good shooting game ($5,400), and if Redick and Bayless are out again I assume he’ll be popular.

Normally I would be super worried about Markkanen having to cover Anthony Davis, but he’s seen Davis 2x this year already (once in preseason and then in their regular season meeting earlier this year), and in both meetings Markkanen showed an ability to “defend” Davis without fouling (defend in quotation marks, because Brow still went bonkers). If Markkanen can successfully stay on the floor again, he will get a ton of three-point attempts against Davis; he had nine in 15 minutes in the preseason game and 11 in the first regular-season meeting. Without Kris Dunn on the floor, Markkanen sees a minor uptick of 0.8% usage increase and a .06 FP per minute boost to get him to 1.05 FP/Min on the season. Marrkanen is fairly priced, so he won’t be popular, but if he reaches 10 three-point attempts, he can crush his price tag if he gets hot.

Other Options: Anthony Davis ($10,800) had 23 FT attempts against the Bulls in a preseason game, and the regular season meeting went no better for the Bulls. Davis is the star I’m most likely to pay up for today. If you don’t have that kind of salary, Jarell Martin ($4,400) is questionable but would be in line for big minutes if he can go; JaMychal Green is already ruled out with an ankle injury.

Not only is it Eric Bledsoe revenge, it’s also Greg Monroe revenge. The first time these teams met, Monroe played 32 minutes off the bench (behind Chandler) and put up a monster 22-15 line. The Phoenix Suns haven’t had a back-to-back in over two weeks, so we haven’t seen much of Monroe lately, but given the coach’s willingness to play him in the first revenge spot in Phoenix, you would think he would be willing to play him again in Milwaukee. There is obviously massive risk with this, as he could DNP-CD, but with Phoenix having nothing to play for and Monroe being a pretty good camper about not playing, I think the Suns will throw him this bone in a great matchup.

Other Options: Tyson Chandler ($4,400) is in a great spot if we get word he’s starting, but there is risk he loses some minutes to Monroe. Speaking of revenge, we know that Jusuf Nurkic ($6,500) still holds a grudge after the Nuggets traded him, and he will try to take it out on Jokic (he struggled in first matchup this year but has flashed a massive ceiling in prior revenge spots). Rudy Gobert ($7,000) apparently didn’t need a minutes limit, as he’s played 30 and 28 minutes in his first two games back, and now he gets a dream matchup against the Atlanta Hawks.