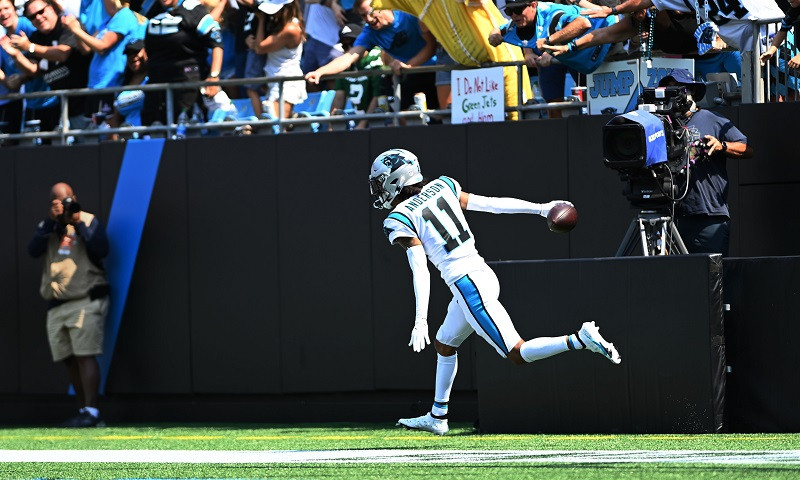 Will Sam Darnold continue to torch defenses in Joe Brady’s offense and how will rookie quarterback Davis Mills fare in his first NFL start? All of that and more as NFL betting analyst Andy Means breaks down his three favorite player props for the Panthers vs. Texans. Looking for a big payout? Check out these same-game parlay picks for Thursday Night Football!

First things first, we are getting a great number here over at FanDuel. For example, DraftKings has this line set at 265.5 (-115 on the Over). I was already kind of liking the over when I first saw the number on DraftKings. So when I started shopping around and saw how much better it was at FanDuel, my interest was piqued even more.

And a simple look at Darnold’s game log in his two games with the Panthers should give us the warm-and-fuzzies about him hitting the over tonight. He threw for 274 yards (24 for 35) against the Jets in Week 1 and followed that up with 305 yards (26 for 38) in Week 2 against the Saints.

Personally, I love the fact that Darnold threw the ball that many times considering they were playing from ahead in both games. With the Panthers being -8.5 tonight on the road in Houston, it is likely we see a similar game script to their first two games. And obviously, there is nothing wrong with that.

Our expectations should be different for Darnold now that he is in Carolina. I noted above that he threw 35 times in Week 1 and 38 times in Week 2. The last time he threw that many times in a game? All the way back in Week 4 of the 2020 season. His high watermark for yards in a game last season? 266. He beat that in each of his first two games with Carolina!

There are still ways this can go wrong, so I don’t want to go counting the money just yet. If Carolina gets out to a big early lead against this Houston team (think something similar to those first two games but more like a three-touchdown lead going into halftime), then they could just pound it on the ground with Christian McCaffrey for much of the second half.

This Houston secondary is bad enough though, that I’m banking on Darnold clearing the over on this line. Heck, he might be the reason they get out to a big lead to begin with! And with that great line over on FanDuel, I’m definitely riding with the over here.

Technically, I am listing this as just a player prop bet on the over on Anderson’s receiving yards. This is a player prop article after all! But I am going to swerve a bit here and mix things up. Because you know what I really like to do here? Make this into a Same Game Parlay by including Anderson as an “Anytime Touchdown Scorer”.

Why do I like this route better? Because if Anderson is to hit the over on his receiving prop, then I think it is far more likely that it also includes an Anderson receiving touchdown.

In the early going this season, Anderson has a much higher ADOT (average depth of target) compared to D.J. Moore. Through the first two weeks, Anderson’s ADOT is all the way up at 23.42 yards while Moore’s is at just 9.74 yards. That has led to far more targets for Moore (19; just 9 for Anderson) because the throws are just flat-out easier to make.

Look back at Week 1. Anderson had just three targets and one reception, but that one reception was a 57-yard touchdown catch. In Week 2, Anderson turned his six targets into three receptions for just 38 yards.

So basically what I am saying here is that any projection system you look at is probably going to say that the over on Anderson’s receiving yards here is the bet to make. And while I agree to a certain extent, I think there is a lot of volatility on his receiving yards projection. I think we can turn the odds in our favor (and make the game way more fun to watch) by adding in the “Anytime Touchdown Scorer” to make this a Same Game Parlay. Besides, this Houston secondary is burnable, and I think we see Anderson have a break-out game here.

I’m not going to blow smoke up your behind and pretend like I’ve been over here crushing some film of Mills at Stanford. This is all about how I think this game script goes. Well, and also that the Texans could find it increasingly difficult to run the ball.

On that latter part first, here are the rushing lines that the Panthers allowed in their first two games…

No, what happened in the first two weeks is not precisely indicative of what will happen going forward, but holy crap, look what they did to Kamara.

And then on the game script part of things, the Texans are touchdown (and then some) underdogs at home against the Panthers. They are starting this rookie QB, a QB who struggled in the preseason. So they should get stomped tonight, right?

Honestly, I don’t care one way or another. Even if they do get stomped, Mills can still easily hit this over on sheer volume alone. In fact, I could even see him getting damn near half of this number in garbage time alone, should it get to that point.

Remember that Monday Night Football game between the Lions and the Packers? Jared Goff had 187 passing yards heading into their final fourth quarter drive, down 35-17 with 3:07 left in the game. And after that meaningless drive? He finished the game with 246 passing yards. All passing yards count when we are talking player props, even the ones that, ya know, don’t really count.

Davis, you can throw 4 picks for all I care, as long as you are slinging it all over the field. Incidentally, does anyone know if we also get the yards counted for interception returns?? Asking for a friend…