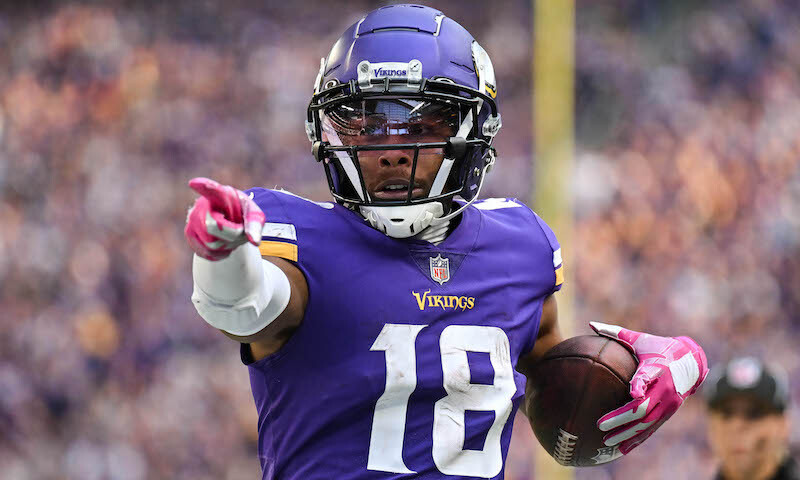 Through thousands of simulations using ScoresAndOdds’ ParlayIQ tool we aim to create profitable same-game parlays across sports betting sites. We will examine stats, roster news, trends, player props, and betting odds across sportsbooks to find the best price for a fun primetime parlay sweat. Today, we build a Thursday Night Football same-game parlay for the Patriots vs Vikings.

Happy Thanksgiving, Grinders! The Thursday Night Football game closes Turkey day with the New England Patriots against the Minnesota Vikings. The Vikings are coming off of a beating at the hands of the Dallas Cowboys. The Patriots, on the other hand, are fresh off a punt-return touchdown for a victory against the New York Jets. While this might not be the most exciting contest on paper, both teams are very much in the playoff picture and are clearly motivated to gain a victory. Shake off the tryptophan, unbutton those pants, and let’s build a same-game parlay ticket for the Thanksgiving edition of Thursday Night Football.

FanDuel Sportsbook lists the Minnesota Vikings at 2.5-point home favorites. At the time of this writing, the Vikings side of the spread has a -118 price tag and the implied game total is 42.5 points. Per SAO, 61% of betting money has been placed on the New England Patriots side — a likely reason why the line moved a full point since opening at -3.5.

For injuries, DeVante Parker was limited at practices this week and is questionable for tonight. Bill Belichick hinted at benching offensive tackle Trent Brown but Isaiah Wynn hurt his foot against the Jets. The Patriots signed Conor McDermott to replace Wynn, but Brown will likely continue at the tackle spot.

For the Vikings, Andrew Booth did not practice on Tuesday with a knee injury and is very questionable to play. With limited injury news, both teams should be at full strength for a game rife with playoff implications. Filled with superstars, I am sure we can find a one-game parlay worth a sweat.

The Minnesota Vikings are the toast of the NFC North but are very, very far from being a perfect team. While the Vikings are loaded on offense, the defense has been more than suspect. Giving up 7.6 yards per pass attempt, the Minnesota defense can be had through the air.

This flies in the face of what the New England Patriots want to do on offense. Clearly, the Patriots want to play great defense and keep the ball on the ground with their dynamic duo in the backfield. With that said, the easier path in this game would be to let Mac Jones air it out a bit. In a dome, the game could descend into a track meet.

Last week against a far superior defense, Jones racked up 246 passing yards. Given the nature of the opposing defense, we shouldn’t be surprised to see Jones throw the ball a lot. ParlayIQ figures to see this over in just more than 50% of simulations. So, we are starting just ahead of the curve.

Correlating well with Mac Jones and his passing yards, we add Rhamondre Stevenson and his receiving over to our ticket. ParlayIQ is particularly fond of this leg, hitting in 71% of simulations after we book the Mac Jones passing over.

Stevenson has five consecutive games with five or more targets; in two of those games, Stevenson shared the backfield with Damien Harris. His top role hasn’t changed much since Harris returned and even if it does, Stevenson will retain his pass-catching duties. If the Patriots drop back to pass more often, Stevenson should be running more routes.

We include Stevenson who has already flashed enough big-play upside to threaten to go over this prop with one catch.

Now, for the Minnesota side, Dalvin Cook had a three-game stretch where he saw five or more targets before the Vikings ran into a buzzsaw in Dallas. I am willing to throw that game out as the Cowboys took it to the Vikings right off the bat and boat-raced them in a blowout victory. Even if the Patriots play well, the Vikings should be in contact throughout the game.

If we get Cook back to his 4-5 target range, he won’t need much to exceed this total. ParlayIQ seems to always love running back receiving props especially when they are this low. We have had success recently with the likes of Derrick Henry and Christian McCaffrey. Let’s add Dalvin Cook to that list.

Lastly, KJ Osborn closes our ticket instead of running mate Justin Jefferson. Jefferson has a pretty robust receiving prop and Bill Belichick has always shown a penchant for taking away the opponent’s top option. If the Patriots try to remove Jefferson from the game, we will see more work for the likes of Adam Thielen, Dalvin Cook, and KJ Osborn.

Osborn has seen his share of targets recently including an 11-target spike week. Unfortunately, Osborn is wildly inefficient and does not convert said targets at a high rate. With that said, this yardage prop is so low that a few catches should do the trick. We project Osborn for just below four targets and around 28 receiving yards. If you can tease this number down, I would probably do so.

ParlayIQ recommends the following price for this ticket: 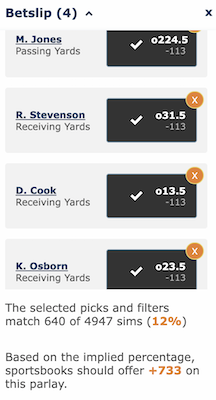 FanDuel Sportsbook comes in with a slightly boosted price: 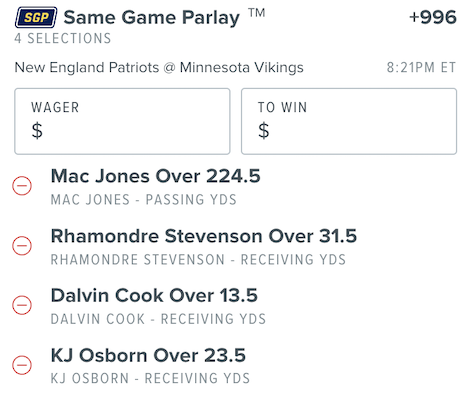 Good luck with all of your bets and plays this evening. Share your parlays with me on Twitter and any other plays you are making for the game. First touchdown scorers? Touchdowns? DFS lineups? Thanks for reading.