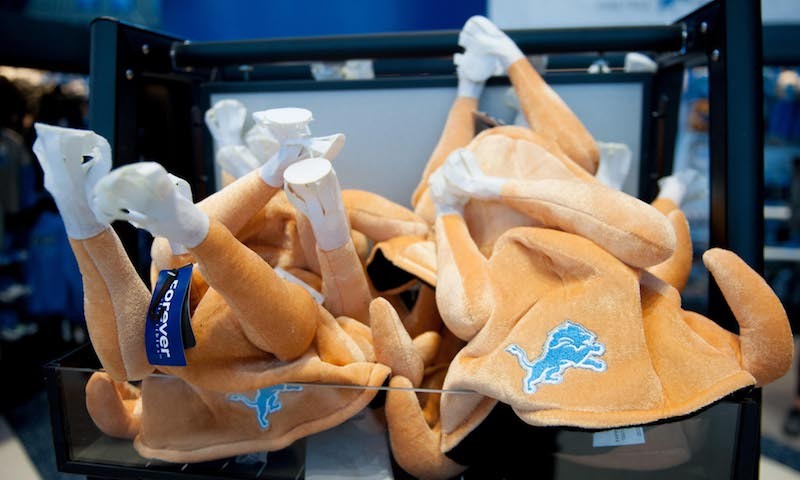 Gobble, gobble. We’re just one day away from turkey, pumpkin pie, and football as Week 12 kicks off with a three-course meal on Thanksgiving Day. The table is set at 12:30 pm ET and dessert will be served at 8:20 pm ET.

Per usual, the Detroit Lions will start the day, this year as they host Deshaun Watson and the Houston Texans. They’ll be followed by the Washington Football Team at the Dallas Cowboys a few hours later. And if you’re keeping up with a pathetic race in the NFC East, this game is actually more interesting than their records suggest. We’ll have to wait until 8:20 pm ET for the good stuff — the Baltimore Ravens vs Pittsburgh Steelers.

Update: Dessert has been canceled and postponed until Sunday.

If you’re like me, you started perusing online sports betting sites sites for NFL odds and Thanksgiving Day bets last weekend. Here’s what I wrote on Saturday regarding the Thanksgiving Day lookahead lines.

HOU at DET (Open -2): Will Swift be back for turkey? Possibly, but head coach Matt Patricia hasn’t given a ton of detail regarding the rookie’s status. I like locking in the Texans +2 here. I won’t be shocked if the Texans beat the Patriots on Sunday. If the Lions play poorly without Swift, this game could end up closer to a pick’em.

WAS at DAL (Open -1.5): Smith is playing like he’s been given a new lease, and he certainly has the talent around him to succeed. If things go bad for the Cowboys against the Vikings while Smith and the Football Team look solid again in Cincinnati, I won’t be surprised if Washington is a small favorite on Thanksgiving Day.

BAL at PIT (Open -2.5): Despite my early lean, I’m going to wait before betting on this game. Ahead of Sunday, the Ravens are quite thin on the defensive line with Calais Campbell and Brandon Williams listed as doubtful. This could be just what Derrick Henry needs to lead the Titans to upset over the Ravens as 6-point underdogs. Meanwhile, the Steelers are two-touchdown favorites against the Jaguars.

Turns out I was wrong about how much this line could possible move. Fast forward a days and the Detroit Lions (4-6) are now getting a field goal from rather than laying two points to the Houston Texans (3-7). Even with the large line movement at sportsbooks, I still like the Texans -3 against the Lions.

Despite now-fired head coach/GM Bill O’Brien trading his quarterback’s favorite target in the offseason, Deshaun Watson has been one of the most efficient passers in all of football.

It’s still to be determined whether running back DeAndre Swift and wide receiver Kenny Golladay will return to the field for the Lions’ annual Thanksgiving game, but it’s bad news if they’re missing either one.

The entire NFC East has been horrid as no team has more than three wins heading into Week 12. The Cowboys and Football Team have only three wins each, yet somehow this game still has playoff implications. Quarterback Andy Dalton might be healthy for Dallas but it’s Washington who has more reason to be optimistic.

In addition to a young talented defensive line that should wreak havoc against a Cowboys offensive line that is slowly returning to health, the Washington Football Team has one of the best young wide receivers in Terry McLaurin, a play-maker in rookie running back Antonio Gibson, and now veteran quarterback Alex Smith, who had back-to-back 300-yard passing games in week 9 and 10. Smith had only eclipsed that mark in consecutive games once during his time in the NFL prior to his return from a gnarly leg injury that put not only his NFL career in jeopardy but his life. Smith is playing like he’s been given a new lease, and he certainly has the talent around him to succeed.

It’s also worth noting that Washington’s defense did rack up six sacks in their first meeting with the Cowboys. In fact, they pressured Andy Dalton on an absurd 50% of plays in Week 7. That performance was an outlier but this defensive line has been impressive throughout the season. They have a pass rush win rate of 49% (6th), helping them reach opposing quarterbacks 32 times for the third-most sacks in the league. The Washington defense needs to learn how to travel better, though. They’ve allowed 28.3 ppg on the road. Luckily they match up with the Cowboys as well as they do any team. I expect Washington to rattle Dalton while Smith connects to McLaurin with little disruption from a Cowboys defense that is last in the NFL in points allowed.

The Steelers are the league’s last remaining undefeated team, but if you look a little closer at their wins it’s clear they’ve been pretty lucky thus far. Their schedule has also been pretty favorable. Most alarming was their 24-19 victory in Dallas, a game they played from behind in and needed 15 points in the final quarter to dodge what would have been a shocking defeat. The Pittsburgh Steelers do have a three-game lead in the AFC North, though, and head coach Mike Tomlin and quarterback Ben Roethlisberger deserve plenty of credit.

However, I think they’re bound to slip up sooner than later. Don’t let the fact that the Ravens will be missing running backs Mark Ingram and J.K. Dobbins scare you away. Gus Edwards and Justice Hill will fill in just fine.

Baltimore hasn’t been this large of an underdog since 2018 and this is the second-largest underdog spread of Lamar Jackson career. Give me the points.