NFL Preseason DFS is back on DraftKings, FanDuel, and the sports betting menu industry wide! After a scrub-free summer in 2020, we’re back to the grind discovering the very best preseason players to consider for each daily fantasy football slate.

In this article, we’ll touch on the top options on a position by position basis. We’ll also dive deeper looking for long shots and under leveraged plays for large field GPP contests. The goal is to help you quickly understand the slate and build a competitive lineup without the extensive time it takes to research every 85 man roster. Leave the dirty work to us, and focus on using the tools here at RotoGrinders to construct yourself a dangerous and profitable team. 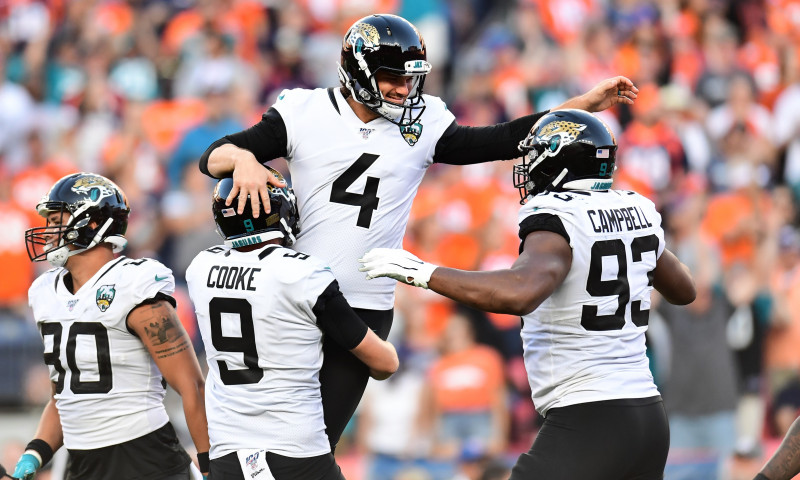 Saints DST – NO: This is maybe one of the worst DFS slates I have ever attempted to analyze, as there is almost no difference in the expectation fpts wise on almost every single eligible player in the pool. The defenses and kickers are the exception here, as they are the only participants guaranteed to be able to score fantasy points for the entire game. The Saints defense is marginally preferred over the Jaguars thanks to the existence of two sub-standard QBs in Jake Luton and C.J. Beathard. We can further expect that they will play a giant swath of their never ending WR corps, none of which figure to be exceptional NFL talents and should therefore make offense a little tougher to come by. This offense managed only 13 points against the deepest depths of the Browns last week, and I would not expect big things on the road this week.

Josh Lambo and Aldrick Rosas – JAC/NO You’ve waited. And waited. You asked. “Wen Lambo?” Well good friends, the time is now! The fantasy point projections on this slate are all quite jam-packed, and few players can offer us the safety of kickers on this slate. While the upside is potentially limited, I will fall over dead if the offense on this slate comes from a short set of easily identifiable skill players. Playing a bunch of kickers in showdown to raise the floor of your lineup is a great idea, and quite frankly the odds may never be better of at least one kicker being needed as a top 6 score for the perfect lineup.

Jaguars DST – JAC: Jameis Winston is perhaps known for questionable decisions such as eating his own fingers and throwing into traffic. Suffice to say he’ll start today against the best of the Jaguars defense, and his supporting cast is nothing to write home about. Aside from the obvious advantages of DST in preseason showdown, this is actually not that bad of a defensive setup anyway for the Jags. New Orleans is a washing machine, which is where you might find washed things like Kevin White, Devonta Freeman, and Trevor Siemian tonight.

Marquez Callaway – NO: I expect Callaway to play 18-22 snaps as was the expectation for phase 1 last week for the Saints. Perhaps they’ll even raise the ceiling for their top 2 groups as they seek to evaluate their QBs. Either way, Callaway will roll out with the first unit and is a massive favorite to be targeted more than once for the offense. That does not sound meaningful on most slates, but on this one I guarantee there will be plenty of goose eggs and low scores. Callaway has an elevated place in my hierarchy for this reason despite what would normally be considered a paltry snap expectation.

Jameis Winston and Taysom Hill – NO: Quarterbacks are high floor / high ceiling type plays relative to the slate, and utilizing them in the flex makes a lot of sense. Somebody like Taysom is even useful in the CPT for his rushing. No matter how you slice it, the New Orleans QBs are safe on the playing time scale for a bit over a quarter each. That should give them both a few shots at a TD drive, which would almost guarantee them a spot in the optimal roster if successful. It’s that bad tonight.

Trevor Lawrence – JAC: Will he be over-owned? Yes, but technically speaking almost anyone who is even mildly popular will also fit that description. Lawrence currently does not have an announced leash from Coach Meyer, but I’m suspecting around a quarter and some change. At this level of playing time – high owned or not – he’s a player worth mixing in.

Update: I just caught a report that the Saints will use tonight as their “big preseason tune-up”, which may indicate that Callaway and Juwan Johnson are even better plays than originally anticipated, while Kawaan Baker becomes less viable but still of interest.

Juwan Johnson – NO: Is he a TE? Technically, but he lined up slot 63.6% of snaps last week and is challenging Adam Trautman for the Jared Cook pass-catching role on the team. His raw points won’t stand out in my projections in LineupHQ, but among the probable TD scorers for the Saints I like him above most of the team. I believe they want to see what he can do, and should dial up plays with that evaluation in mind.

Tony Jones Jr. – NO: Jones rumbled for 7 carries and 82 yards last week against the Ravens, and was afforded a healthy 36% of snaps to do it. With just an aged Latavius Murray and Devonta Freeman in front of him, the undrafted player from 2020 hopes to prove he can remain a part of this team for the upcoming season. I do not expect Sean Payton to exceed substantially his typical maximum of 29 snaps for any player (has been quoted on that), but I do expect Jones to get comparatively more opportunity in this game than any other back playing. That’s the name of the game in Preseason DFS.

Kawaan Baker – NO: The New Orleans receiving corps is fairly thin tonight, and that should lead a few bodies into significant snaps. Baker played 38% of snaps last week, and is high on the list of options to play a bunch this week as well. I’m expecting the workloads to shift around today just a little bit, and I feel he’ll be lower owned than Lil’Jordan Humphrey (51% of snaps and scored last week).

A note on the Jaguars: Somebody is going to do something, but here are the problems making a recommendation…

— Urban Meyer divulges limited information about his plans
— The team spread reps incredibly thin last week and there is no clarity on how much that philosophy changes at this hour.
— They have 6 runnings backs who could be available (and likely) to play and 14 possible WRs.
— They have 4 QBs and all of them played last week
— Their TE team photo is displayed next to “Jabroni” in the latest online dictionary updates
— They are 4-point underdogs on the road in a game total of 39

If you want a recommendation on who to play for them, don’t ask me. Ask this:

UPDATE: The Magic 8-Ball Shared a Tweet (or two) that suggests “starters” might go a little longer, and I have few takes as a result

More time, but the kicker will be how long due to a couple starting OL (linder and Norwell) being out. https://t.co/aXsYWdvxzb

Collin Johnson – Played over 40% of snaps last week and is in line to see reps as a starting outside WR in the absence of D.J. Chark. Has been reportedly making the most of his chances in camp.

Travis Etienne – Should the starters play a big longer, it could be enough for a pass capable back to do damage should an early drive go his way.