With just 4 games remaining in the final big slate of DFS action of the year, this will be the final time this season that we run through our RSI numbers to see where the value lies. 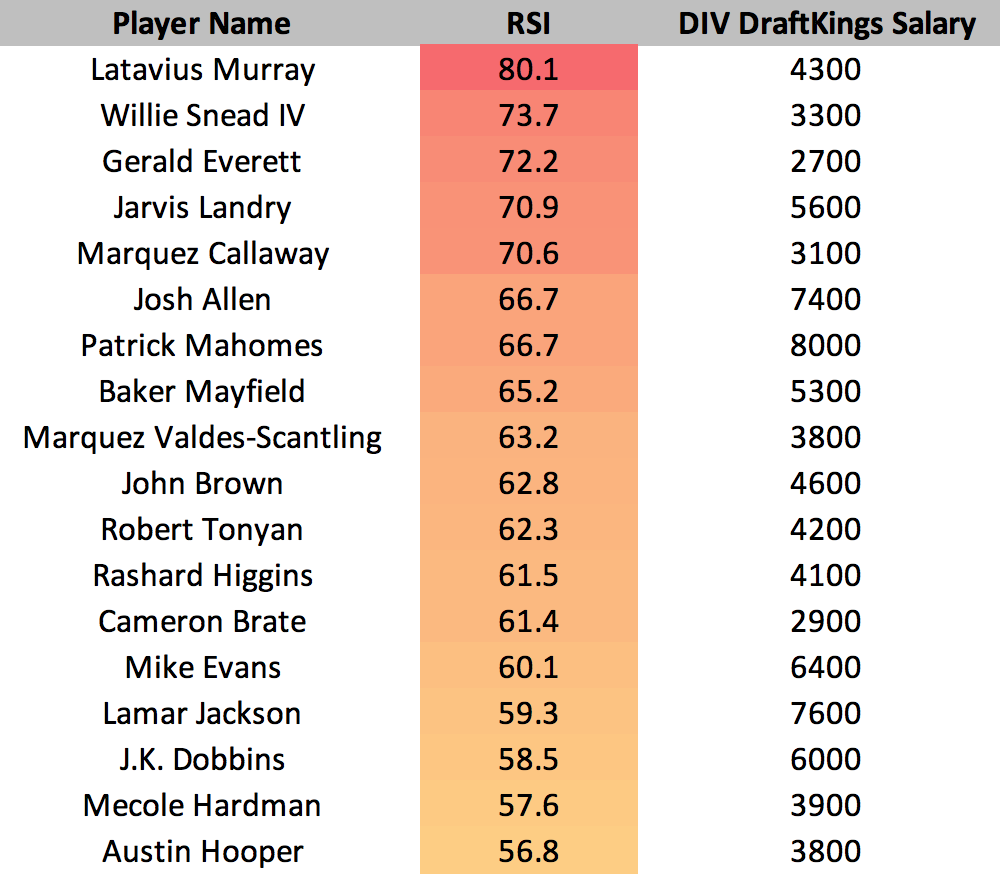 The veteran WR played nearly every snap during Buffalo’s Saturday victory over the Colts but failed to secure any of his 4 targets, leading to a 0-point fantasy performance. Brown’s role as a starting outside WR in one of the most pass-happy offenses in the NFL should make him an automatic play at this price point, but it’s looking more and more likely that Brown is actually the #4 receiving option on the Bills. Rookie WR Gabriel Davis has both siphoned targets from Brown and has emerged as the team’s primary deep threat, recording 20 targets of 20+ yards compared to just 13 for Brown in 2020. Ranking behind Cole Beasley, Stefon Diggs, and Gabriel Davis in targets, red-zone targets, end-zone targets, and receiving TDs is not where we expected Brown to be at this point in the season, but outside of the possibility of a long TD reception, Brown’s fantasy value is dwindling before our eyes.

Even at close to the minimum WR price, Willie Snead simply isn’t a strong fantasy play. Similar to Brown, he’s a full-time starter in a high powered offense. What limits Snead, however, is the Ravens’ lack of desire and overall inability to throw the ball efficiently. Since Week 11, Snead hasn’t eclipsed 5.9 DraftKings points in a single game. In tournaments, those looking for a WR to pair with Lamar Jackson should be focused on either volume or deep targets, and Snead doesn’t offer much of either. As the #4 WR on a run-first team, a 0-point outing is just as likely as a double-digit one.

The lead RB on a run-heavy team is facing one of the league’s worst run defenses? What could go wrong? Despite their abysmal 38.9 PFF run-defense grade (2nd-worst), the Buffalo Bills proved on Saturday that run defense is primarily a choice. Limiting Colts’ rookie RB Jonathan Taylor to just 3.7 yards per carry was principally a result of placing more defenders inside the box, in an attempt to force Phillip Rivers to throw. Against Baltimore this week, I expect Buffalo to deploy the same game plan, placing extra defenders near the line of scrimmage to force Lamar to beat them throwing the ball. Dobbins should still see 10-15 carries, but as the slate’s 4th-most expensive RB, anything under 4 yards per carry won’t add up to a compelling fantasy performance. With Buffalo making optimal coaching decisions at every opportunity, it’s difficult to foresee a big game on the ground for Baltimore this week. 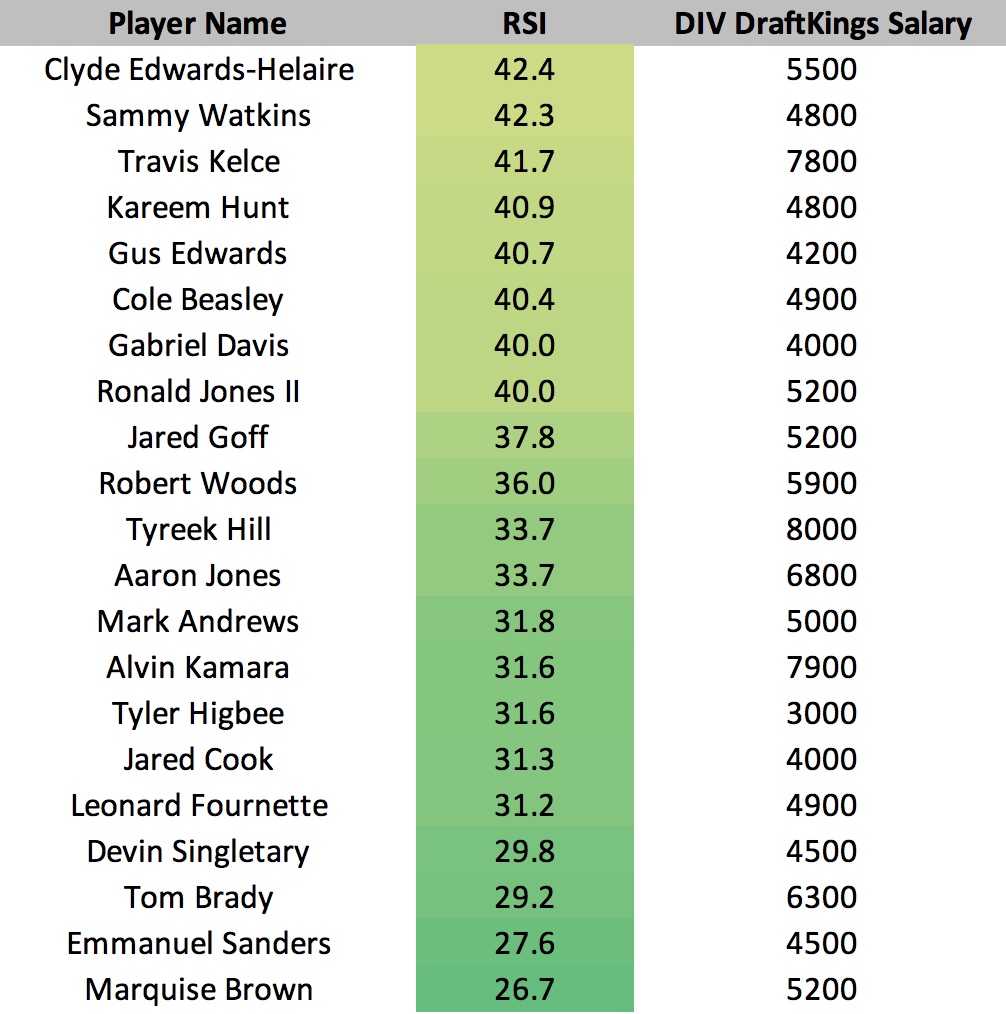 Two of Brady’s worst outings, including a brutal 5.36-point DraftKings performance, came against New Orleans in the first 9 weeks of the season. Since that Week 9 game, however, Brady has recorded PFF’s 3rd-best passing grade, 22 passing TDs (2nd most), 2,616 yards (1st), 8.6 yards per attempt (2nd), and a 109.2 passer rating (4th). This guy is playing at a Hall of Fame level, even at the age of 43. Head Coach Bruce Arians’ system typically takes at least 1 full season for QBs to get adjusted to, but Brady has hit that 2nd-year stride right on time for the playoffs. At likely sub-10% ownership on a 4-game slate, Brady’s popularity just won’t reflect his massive upside in the divisional round.

I wrote up Singletary last week as a decent low-owned option who should see goal-line work in a high-powered offense. This week is completely different. With backup RB Zack Moss having been ruled out for the season, the backfield belongs to nobody but Singletary. Guys like T.J. Yeldon, Taiwan Jones, and the recently signed Devonta Freeman will still see the field, but Singletary is headed towards an 80% snap share and a potential 20+ touches. Barring any massive surprises, Singletary is the ‘free square’ of the divisional round and can be safely rostered in every format.

The way Bruce Arians has treated his RBs this season has been beyond frustrating for fantasy owners, as it’s been nearly impossible to predict. With that being said, the most valuable piece of information we have for the divisional round is what happened in the wild card round. On Saturday night, Fournette logged an 85% snap share, 19 carries, and 4 targets while an active Ronald Jones watched from the bench. For arguably the first time all season, Fournette looked explosive, and he could easily have control over the backfield again in the Divisional round. As the slate’s 9th-most expensive RB, putting your faith in this element of the Bucs’ backfield may very well be worth the risk.

Even immediately after recovering from COVID, Kamara logged a 70% snap share on Sunday, his 5th-highest mark of the season. During the playoffs, teams play their superstars more than they typically would in the regular season, and that’s something DFS players should look to take advantage of. High-total games like this upcoming contest against Tampa Bay have been very friendly to Kamara in the past, as he’s averaged 23.4 DK points when the over/under is over 48.5.

Some fantasy players are likely jaded towards Kamara’s lack of stellar performances to end the year, but it’s important to remember, four of those games happened with Taysom Hill under center. With Drew Brees back, Kamara can realistically project for 10-15 carries and an ever-so-crucial 25%+ target share. Outside of maybe Davante Adams, there is no better combination of talent, volume, and TD upside in the divisional round than Alvin Kamara.