Visit the FanDuel sportsbook for an instant deposit bonus up to $100 with just a two-time play through!

Check back later for updates.

Now there’s a bit of a dilemma. The price for the A’s (+180) has risen above what was paid for the Yankees (-178). Since the Yankee play was part of a risk free promotion on FanDuel and not the result of the work done for today’s game. A smaller play on the A’s might be in line. Using actual monetary amounts instead of units this one time because the FD promotion was specifically for a $50 credit should the Yankees lose:

This may be the way to go and I’ll grade any result monetarily as part of a specific promotion rather than in units due to the circumstances. In this scenario, I believe I’m rooting for the A’s. Without surrounding circumstances, I believe I’d be playing the A’s at +180 anyway.

Thinking through it in real time while writing, let’s just keep it simple and call it a 1 unit play on the A’s for tonight instead with the FD promotion as insurance.

While I would have preferred any other bet in this game, FanDuel has just made my decision for me. They’re insuring up to $50 bet on the Yankees. It has to be played and early is probably best before the public drives this popular team back up. Of course, the Cubs (just as popularly bet) dropped before moving back up to close just about where they opened, but I’ll be out of state without access for a few hours, so here goes..

Easy, sweat free win for the Rockies last night. They had it all the way.

It was a pretty crazy game and to be honest, I had my finger hovering over the Cubs on the live betting module, strongly considering buying out several times late in the game at 1-0 Rockies. I can’t tell you why I didn’t do it, but I stuck with the Rockies. I also adjusted the price down $1 from +126 to +125. That’s the price I finally bought in at even though I mentioned waiting until the last minute and using +126 for record keeping, that being the price when the last update was posted.

The A’s are being bold tonight, but they know their starting pitchers are all back end guys and the bullpen is the strongest part of their staff. Liam Hendriks will start the game, but there’s a good chance we’ll be seeing Blake Treinen (25.1 K-BB%), Jeurys Familia (19.9 K-BB%), Lou Trivino (17.2 K-BB%) and potentially other starting pitchers who’s stuff may play up in shorter relief roles tonight.

The Oakland bullpen on the whole had been one of the strengths of this team, even if September was not their best month (3.85 FIP, 13.3 K-BB%). The star studded Yankee bullpen was also not as completely dominant over the last 30 days (3.67 FIP, 19.7 K-BB%).

Remember that Luis Severino started last year’s game and was quickly down 3-0 and out of the game. The Yankees fired weapon after weapon out of the pen at the Twins until over-taking them and eventually going on to win. Severino finished the season with a 3.39 ERA, 41 points higher than last year. His 22.3 K-BB% and 3.26 SIERA were both virtually the same as 2017, but we know he went through a long lasting rough stretch post-break. His 89.1 mph was more than a mph above 2017, his .290 wOBA and .310 xwOBA were both still better than average, but much higher than last year’s marks. His xwOBA on contact exceeded .400 for the first time in the Statcast era (since 2015).

The strikeouts came back in August and he finshed up allowing four runs over his last 17.2 innings, so the Yankees have to be confident he’s back on track, but they’ll be ready to empty the bullpen should he run into trouble early as he did last year.

This is an offense that could give him trouble too. Their 116 wRC+ vs RHP was third best in baseball and this lineup is nearly as strong as the Yankees at full strength. They struck out just 21.8% of the time against RHP, a 14.0 HR/FB and 39.4 Hard% against them as well. Perhaps most importantly for a team that makes so much hard contact in this particular park tonight, they had a major league low 39.4 GB% against RHP. Severino’s ground ball rate dropped nearly 10 points this season, from 50.6% to 41.1%.

Severino also had his last terrible start in Oakland on September 5th (2.2 IP – 6 H – 6 R – 5 ER – 0 HR -1 BB – 3 K – 15 BF). While he did not pitch well in that game, it’s one anyone who watched that game will remember it didn’t appear to be entirely his fault. Gary Sanchez was merely impersonating a catcher in that outing and these two have had their issues coinciding this year. This is a battery the Yankees will employ again tonight, but it’s fair to wonder if it may not be a mistake considering the state of Sanchez’s offense this year and the fact that’s he’s only batting eighth. 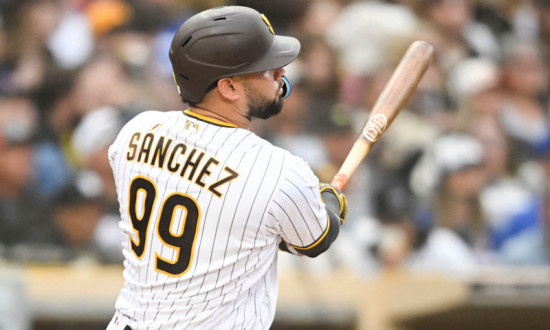 That he is batting eighth, also goes to accentuate the potency of the Yankee offense. They were right behind the A’s with the fourth best wRC+ (109 vs RHP) with a 16.4 HR/FB, 36.6 Hard%, and 42.4 GB%. They will face mostly RHP tonight, but that’s probably what the A’s want because they might be even better against LHP. Of course, they also reside in a much power friendlier park than the A’s, but still led the league with a 120 wRC+ at home (which is supposed to neutralize park effects), along with an 18.5 HR/FB there as well (second best home offense had a 17.7 HR/FB). The A’s had a 15.7 HR/FB on the road that was third best in baseball too though.

Perhaps the last things to consider are defense and weather. The Yankees were very middle of the road (0.1 UZR, 6 DRS), but did make significant improvements in turning ground balls into outs once Gleyber Torres was called up. The A’s have quietly been one of the best defensive teams in the majors (36.7 UZR, 25 DRS). Matt Chapman may be the best defensive third baseman in baseball and I say that after we saw Nolan Arenado for 13 innings too last night. Ramon Laureano has greatly improved the outfield defense and even Marcus Semien, once considered a butcher at SS, posted an 8.3 UZR and 9 DRS this year.

The weather appears to be perfect for baseball tonight.

Early line movement has dropped the moneyline slightly despite a bit more of the action on the home team. An 8.5 total hasn’t moved, but the vig has gone from -120 over to -120 under with most of the wagering favoring the over. With the four books most commonly employed here, the Yankees would currently be best gotten at DK/SH -175 with the best line for the A’s currently on FD (+158).

I do not have a play for this game yet and considering that I do have a small amount on the A’s for a championship run, I may not have one with that acting as my interest in this game. I will be updating before game time either way. One prop I was looking was over 2.5 home runs on BetStars, but the ask is -133 here. Another option is to wait until after the game starts and perhaps find something favorable through live betting.

My thinking is that all of these teams can match up, at least offensively with each of the teams who won 100 games. For the Indians, if Andrew Miller and Josh Donaldson are healthy, they may be just as good as any AL team in a short series, especially if the Astros are still banged up. All of their big bats except Alex Bregman have taken a step backwards.

The first thing to mention on series prices is that the Astros have dropped significantly, they opened at -225 on SugarHouse yesterday and are currently -167 both there and at DraftKings. It is currently the only series price posted on any of the four sites. This is potentially good news for me as a Cleveland championship ticket holder.

I still hold a sizable free bet ticket on BetStars, which expires on Friday. I most likely see myself using that on the Dodgers in some way. They’re a -182 favorite on BetStars for tomorrow (Ryu vs Foltynewicz) with none of the other three sites currently posting a line for the game or series.