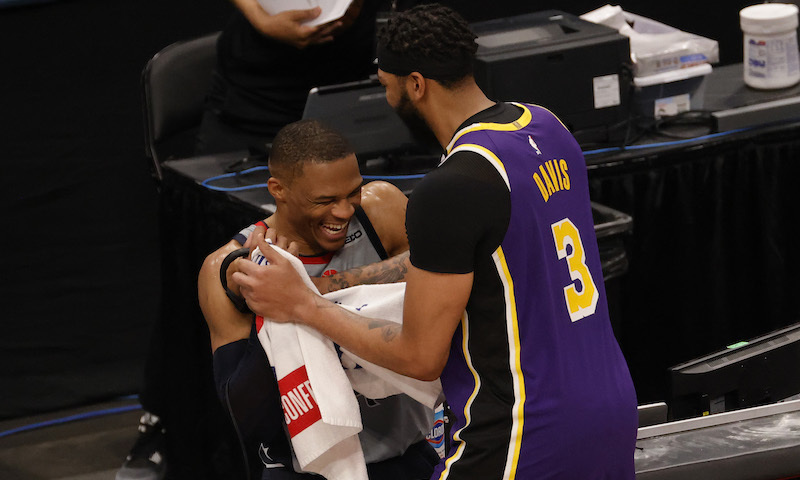 The NBA never sleeps, not even in the offseason. From the draft to blockbuster trades and free agency signings, sportsbooks have had plenty to keep tabs on, including a major trade involving the Los Angeles Lakers. Our own Andy Means is here to break down what the acquisition of Russell Westbrook means for the Lakers’ NBA title odds and how you, the bettor, should view them now.

I will preface this by saying that I am pretty firmly in the camp that thinks the Lakers should have done the trade for Buddy Hield instead of Westbrook (if you are a diehard Westbrook fan, I urge you to at least hear me out before you X out of this browser tab). In my opinion, this Lakers team needs what Hield does well way more than what Westbrook does well, and I’m guessing the asking price would have been much lower too. With Westbrook’s energy and tenacity, he will undoubtedly help this team during the regular season. However, I do worry that he might do more harm than good come playoffs time, where his lack of defense (sorry, it’s true) and perimeter shooting (also true) could be exposed.

All of that being said, once the Lakers officially chose the Westbrook path, I think they have done as well as they could have with their other free agency acquisitions. Such as…

Considering their salary cap restraints surrounding a big three of LeBron James, Anthony Davis, and Russell Westbrook, again, I think they did as well as they could have. For one, they added plenty of shooting, which was very much needed even before the Westbrook trade (and even more so after it). And while the #old jokes were running rampant on Twitter for a brief time there, they also injected some young blood with the additions of Monk (23 years old), Nunn (26 years old), and retaining THT (20 years old).

Moving forward, I do think it is important to zoom out a bit and realize that this team was going to be really good this season, Westbrook trade or no Westbrook trade. WIth LeBron James and Anthony Davis, they have two of the best players in the league. You and I could flank those two guys on any given night, and we’d still be able to give the other team a game (well, maybe you…I’m way too old and out of shape now). Let’s not forget that LeBron and AD led the Lakers to a title a mere 10 months ago in the bubble. (And man is that a weird thing to say considering we have already crowned another champion…was that seriously only 10 months ago!?)

The end result of all of this roster turnover is that the Lakers are the prohibitive favorite to come out of the Western Conference in the 2021-22 NBA season (+195 on FanDuel; Golden State is next at +500) and behind only the Brooklyn Nets (+220) for favorites to win the NBA Title (Lakers are +370 on FanDuel but up at +400 on BetMGM). You certainly won’t get any arguments from me in regards to where those odds sit. If we look at the Western Conference specifically, there are a lot of question marks for a few of last year’s top teams.

Kawhi Leonard has a partially torn ACL, so there is no telling when he will play again for the Los Angeles Clippers. He also hasn’t officially re-signed with them yet so, ya know, there’s that too.

Jamal Murray tore his ACL on April 12th, so a year out from that would have him returning right as the playoffs begin. Will the Denver Nuggets play it safe and just keep him out for the whole season? And if he plays, how effective will he be? Nikola Jokic can only do so much…

I could go on and on with teams like the Warriors (Klay returning from injury and an aging Big Three), the Jazz (haven’t been able to translate regular season success into playoff success), and the Suns (was last season just a fluke for them with all of the injury luck they saw against opposing playoff teams?). The Lakers are clearly in a prime position heading into this upcoming season, regardless of how you feel about the Westbrook trade.

I will close things out by saying this about the Lakers betting market. If you are hell-bent on wanting to fire off a Futures bet today, I’d take the +400 on BetMGM for them to win it all. I don’t care if it means they are opposing the Brooklyn Nets; I always like my chances when I am betting on LeBron.

Past that though, I think I’d just wait things out until you can get a better number once the actual season starts. This team’s three best players are all veterans, and the Lakers have shown the past few seasons that they are perfectly fine treating the regular season as one long runway to the playoffs. So if you want to fire at them to come out of the Western Conference, for example, I am certain that you will be able to get a better number than the +195 we see now. Let them lose a few early, let another team come out of the gates red-hot, and then pounce when you see a number you like.