Clayton Kershaw: Under 5.5 Total Strikeouts: Now, we all know that Kershaw is still one of the greatest pitchers in the league, but his strikeouts have really taken a big dip over the last few years. Currently on the season, he owns a 23.3% K rate, and he gets a Philly lineup with a projected 15.9% K rate against LHP. Looking at Vegas odds, Kershaw is currently projected for 5.5 Ks, but the juice is super heavy on the under (-143). This is a bad K matchup with a league average strikeout pitcher. Take the under.

Zach Eflin: Over 4.5 Ks: Zach Eflin has been hot garbage all season long and has only been an average strikeout pitcher so far this season, but Vegas is a little higher on him than his numbers show. Currently, Vegas props have him pegged at 4.5 Ks with heavy juice on the over (-155). While the numbers don’t entirely support this so far this season, Eflin can still go out and put up a gem at any given time. I’m taking the over because of the Vegas lean and the fact that 4.5 if a pretty low prop for any pitcher with elite control.

Joc Pederson: Over 1.5 Total Bases: While two total bases is sometimes a hard ask, Pederson is a guy with a great power going up against a pitcher that really struggles against lefties. On the season, Eflin owns a .374 wOBA and .280 ISO vs lefties, while Pederson owns a .310 ISO and .385 wOBA vs RHP. This is a perfect spot for Pederson, who is on the road team in a ballpark upgrade. Vegas has him pegged at -250 to get a hit and +305 for him to get a HR. He should end up with a double or multiple hits here, so take the over. 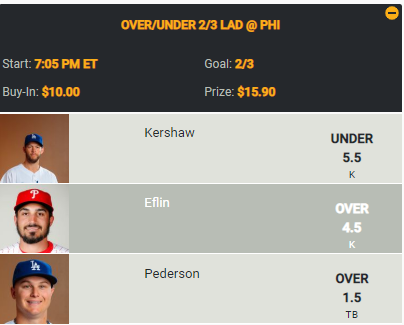 Lucas Giolito vs Jakob Junis (+1.5): Total Fantasy Points: This one is one of the easier props I saw today. Giolito is the much better pitcher, with the much better K rate and ability to go late into games. This line really should have been set at +4.5, with Giolito owning a 3.84 xFIP and 30.3% K rate compared to Junis, who owns a 4.36 xFIP and 20.8% K rate. Just take Giolito and take the free win.

Whit Merrifield (+.5) vs Jose Abreu: Total Fantasy Points: This one is really just a toss-up. Looking at these two players’ numbers, Merrifield has the slightly better numbers, but Abreu has the much better matchup. What this comes down to is the tiebreaker. Neither the White Sox or the Royals have a high implied team total, so the chances of neither of these guys getting a hit are decent. Overall, I think that Merrifield wins this 40% of the time and Abreu hits it 40% of the time, with them being even 20% of the time. Roll with Merrifield.

Yoan Moncada (+.5) vs Eloy Jimenez: Total Fantasy Points: This prop was another easy one. On the season, Moncada owns a .244 ISO and .398 wOBA vs RHP, compared to Jimenez with a .251 ISO and .342 wOBA. Moncada will likely be batting higher in the order and is getting the tiebreaker here. Any time you have a better batter in a better spot and he’s getting the tiebreaker, you just pick him and move on. 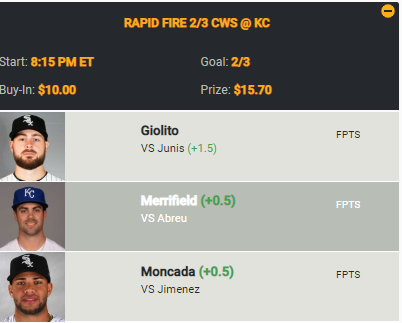 Alex Bregman (+.5) vs Shohei Ohtani: Total Fantasy Points: This prop here is a stone cold lock. Ohtani may get James for his first AB, but he’s going to be facing Valdez for the next few. Ohtani is not only a worse hitter overall than Bregman, but he also struggles against LHP and will get several ABs against LHP. Bregman is one of the best hitters in the league and owns a .400 wOBA on the season vs RHP compared to Ohtani, who owns a .357 vs LHP. Add in that Bregman gets the tiebreaker, and this is a super easy call.

Kole Calhoun (+.5) vs Justin Upton: Total Fantasy Points: This prop was a little tougher. Calhoun and Upton are similar hitters, but Calhoun gets the tiebreaker while Upton gets the platoon split. There’s a chance that Calhoun faces James in his first AB, but I don’t expect Valdez to be in the game too long, so there’s a decent chance that Calhoun gets 2-3 ABs vs RHP. Roll with Calhoun and hope that Valdez isn’t in the game too long. 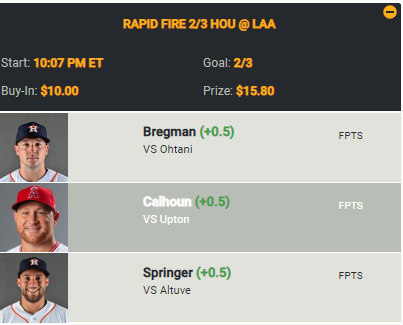