We’ve got a great 10-game slate on tap for Monday night, so let’s get straight to the analysis. Note that the following prices are DraftKings-focused.

With Eric Gordon questionable again, Chris Paul has sneaky GPP upside. Of the top 14 fantasy performances allowed by the Jazz this year, eight of them have been to active guards (including two to CP3 himself after he posted 58.3 and 56.5 DK point games this year). While Paul doesn’t get a massive bump in usage when Harden is on the floor with him without Gordon, in those 12-14 minutes where CP3 plays without Harden, he gets a bump up to 1.54 DK points per minute. The floor for Paul is low, so this isn’t the safest play, but he is a sub-10% option playing a team who has given up massive games to guards this year, meaning he is a nice GPP differentiation play.

Look, I know this feels like a trap (and it probably is), but I’m not sure what else I’m supposed to do other than play Trey Burke. Since they pulled Jarrett Jack from the rotation, Burke has played 56 total minutes and taken 41 combined shots in two games. Now he gets a pace-up spot against the Warriors. Do I think Burke is going to score 26 real-life points a game the rest of the way? Of course not, but at $4.6K I’m looking for 28-32 fantasy points for him to be a massive success in GPPs. It’s hard to fade a guy taking 20 shots a game at this price. The obvious downside here is that Hornacek can change the minutes at any second, and Burke isn’t exactly a young player that’s part of the future. But, until Burke gives us any sign the shots aren’t for real, I don’t see an option other than to play him. 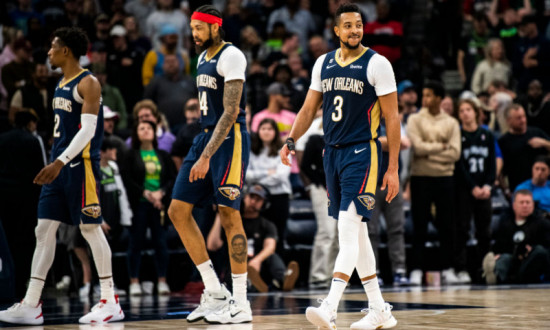 I do like T.J. Warren a bit more than Ingram, but I suspect Warren will be chalk and written up everywhere, so I wanted to write up how sneaky Ingram is. The “point forward” Ingram experiment has been really good for his fantasy value this year. When you look at CourtIQ and have Ingram as the only creator on the floor (aka no Lonzo, Ennis, etc.), he sports a 23.2% usage rate and averages about .0.94 FP/min. When you combine that with the 33-38 minutes a game he plays and the better-than-normal matchup against the Hawks, you get a low-owned play who has a 50-point ceiling.

When you look at Aaron Gordon versus Carmelo Anthony, you cringe at the matchup and wonder how Melo has any chance of guarding him. Then you look at the boxscore and see that Gordon put up 78 DK points in the last meeting between these teams. Then you stop writing, because the point has been made.

Other Foward Options: Nikola Mirotic ($6,500) still has a massive ceiling against Dragan Bender and the Suns. Bobby Portis at $6.3K against the Nets is another matchup that makes me cringe, although Rondae Hollis-Jefferson’s return will make it not quite as embarrassing for Brooklyn. Lauri Markkanen is in a great spot for $5,500, but I wonder if he’s hit the rookie wall, although if there was a spot for a rebound it would be against the Nets.

Felicio has let everyone down so far since his promotion into the starting lineup, but now he gets the Nets. I could sit here and give you all sorts of stats as to why Felicio isn’t as terrible as you think (and you’d sigh and maybe even curse me out for bringing up Felicio), but in the end it comes down to this: On a slate with all these superstars, I can’t fade a center playing Brooklyn who could log 20-25 minutes for $3.K. Jarrett Allen, Quincy Acy, and Jahlil Okafor are the worst defenders around (other than Felicio’s teammates), and if you aren’t going to play him against Brooklyn, you never can. Let me be clear that I’m not thrilled to do this, but given the slate dynamics, I can’t pass up a value C vs the Nets, no matter the name of the player.

Other Center Options: Alex Len ($5,600) has had a price increase, but against the Pelicans he still makes for a nice GPP play. Marc Gasol ($7,100) is his lowest price in months and faces a Boston team he put 54 DK points up against in his first meeting. He also won’t have Tyreke Evans hogging all the usage. Willie Cauley-Stein ($6,500) is a boom-bust option in a dream spot against the Timberwolves.

As always, leave comments/thoughts in the comments section below. Good luck everyone!