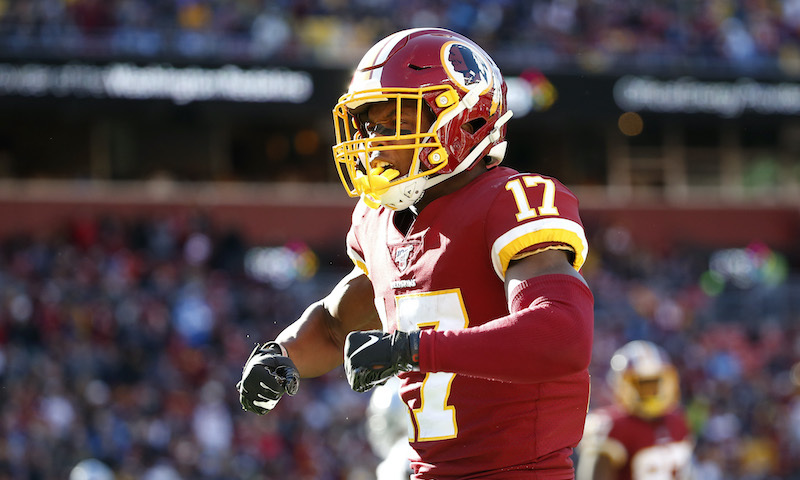 After a disastrous Week 9, I welcomed the Meat Loaf-esque Week 10 — going 2 out of 3 with my prop selections. Ironically, my favorite prop — Aaron Jones over — did not come through as he was not featured much early on against the Jaguars. Alas, a few more shekels added as we aim to make up for our Week 9 bloodbath. This week, my favorite player prop opportunity resides in Washington and must be jumped on before the sportsbook reacts to the market. Here are my favorite props for NFL Week 11 across online betting sites.

Make sure to check out our Week 11 Betting Lines and Picks and some NFL betting tips before diving into the action at online sportsbooks. Let’s get started.

Did weather influence the Cleveland Browns’ gameplan? Probably. The Browns, though, are sixth in the NFL in rushing attempts per game (31.0). Expect that number to go up with both backs healthy and Odell Beckham sidelined for the remainder of the 2020 season.

Unsurprisingly, the Browns average the third-lowest number of passing attempts per game (28.4). Last week, Baker only attempted 20 passes in the home victory. Against the Eagles, the Browns will likely look to establish the run as Philadelphia allows 133 rushing yards per game to opponents. With the Browns’ presently favored at home, I expect them to run as much as possible and limit Mayfield’s passing attempts.

This passing line is certainly low, which is why I am buying at BetMGM. The line is a yard higher than other betting sites and the +100 tag is certainly a plus. Give me the under on Mayfield at BetMGM.

In what should be billed “Future Coordinators in the NFL Bowl,” the Jets travel to Los Angeles to play the Chargers. The Chargers — remarkably — are installed as 9.5-point home favorites at the time of this writing against a Jets’ team poised for the first pick in the draft. Fans and bettors will be treated to a contest between two coaches that will take turns attempting to snatch defeat from the jaws of victory.

That said, Kalen Ballage gets the foolproof, trusty revenge narrative on Sunday. Staring across the sideline will be Adam Gase — an offensive genius that was not able to harness the abilities of the young Ballage. Ballage emerged in Week 9 for the Chargers from the ashes — I think, at least, I didn’t even know he was on the team — for 15 carries and 69 yards. Ballage backed up that performance with 68 more yards in Week 10 and 5 catches. This while Frank Gore still sees double-digit carries each game for the Jets. face palm emoji

Oh, Anthony Lynn is on board…

“He’s answered the call. He’s stepped up. He’s made some tough yards. And he’s definitely helped that rushing attack. He’s a very important part of our offense right now. We’re glad we have him.” #TakeFlight

Lynn is on board. Ballage will get a full workload regardless of the Chargers’ array of excellent weapons in the passing game. The Jets’ defense is abysmal. This feels like a strong bet, revenge, or not. Nothing will feel more appropriate than an ex-Jet running wild against them in the same season he played for the team. Give me the over!

Use our DraftKings promo code to get these odds!

Terry McLaurin must be the quietest alpha receiver in the NFL. I suppose that’s what happens when you play for a generically-named Washington Football Team. McLaurin is 4th in the NFL with 787 receiving yards while the top three receivers have played an extra game. This is pretty remarkable considering McLaurin has seen targets from Dwayne Haskins, Kyle Allen, and now, Alex Smith.

The Team draws a home matchup with the Bengals on Sunday. The Bengals a hefty 11.7 yards per completion and the 8th-most fantasy points per game to wide receivers (per RotoGrinders’ GridironIQ). While Alex Smith is not necessarily the type of quarterback known to stretch the field, McLaurin should find space. With Washington favored by only 1.5 points at the time of this writing, this game could be a back-and-forth affair. Joe Burrow led the league in passing attempts coming into this week. Look for plenty of volume for McLaurin on the other side.

At the time of this writing, other online sportsbooks have this line at 76.5. I will jump on this over before it moves closer to consensus.