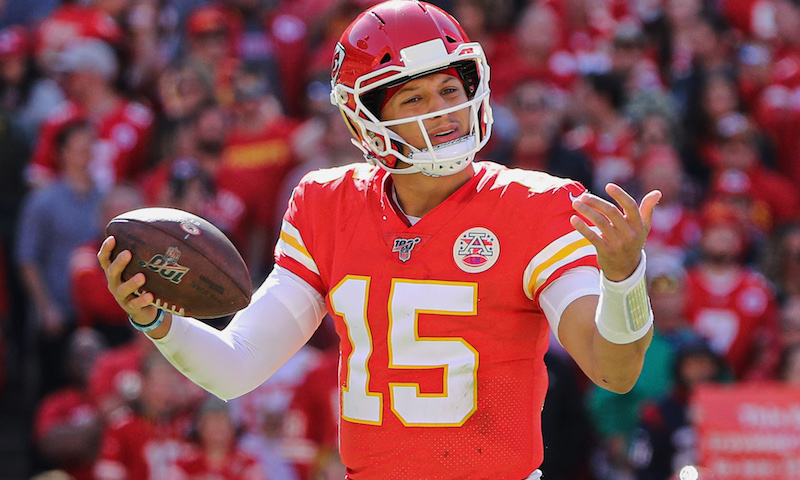 Wagering on Patrick Mahomes and the Kansas City Chiefs against the spread throughout the last two seasons has paid well; “Points Betting” the Chiefs, though, has paid even better.

If you aren’t wondering what the hell Points Betting is, maybe it’s because you’ve already taken advantage of this unique, more volatile way to wager on sports.

Introduced to U.S. customers in 2019 by the Australian-based sportsbook, PointsBet, from which it derives its name, Points Betting is perfect for the sports bettor hungry for increased risk, and reward.

In short, Points Betting rewards bettors more, the more right they are. For example, if you bet on Team A and Team A covers the spread by 15 points, you win 15x your wager. Literally, every point counts.

What’s there to lose? Well, as much as you’re willing to win.

In other words, bettors must take on as much downside as they do in upside. So if you bet on Team A, but Team B covers the spread by 15 points, you lose 15x your wager. PointsBet allows bettors to manage their risk by setting up “stop loss” limits, which is equal to their win limit on the same wager.

In three seasons as an NFL starter, Mahomes has never lost by more than eight points, offering an incredibly high floor for those Points Betting on the Chiefs.

A high floor is not all that makes the Chiefs attractive. Their offense, powered by the three-headed monster of Mahomes, Travis Kelce and Tyreek Hill, can seemingly blow the roof off of a stadium at any moment. Even after falling in a 24-point hole in the first half of a playoff game, the Chiefs rallied to beat the Texans by 20 points, covering the Points Betting spread by eight.

To be clear, “Points Betting” differentiates itself not only in payouts but also in the spread itself..

Notice if you’re placing a traditional wager on the Super Bowl line at PointsBet, you can either bet the Chiefs -3 (-115) or Bucs +3 (-105), whereas the Points Betting line is Bucs +1.5/Chiefs -3.5. The two-point gap creates a middling opportunity for the bookmaker, and makes it more difficult for bettors to cover the spread. But if you catch a team at the right time, in the right matchup, the increased risk might pay off.

As the Chiefs have shown, for them, the matchup rarely matters. Somewhat counterintuitively, Points Betting the Chiefs is most profitable in tough matchups with shorter spreads, such as the 3.5-point spread against the Bucs.

For the sake of simplicity, let’s say a one-unit PointsBet on the Chiefs wins 10 units if they cover the spread by 10 points; likewise, the result is -10 units if they fall 10 points short of it.

With that in mind, the 2019-20 Chiefs profited roughly 65 “Points Betting” units through 18 games en route to their first Super Bowl victory in 50 years. Half of that profit came when they were smaller than 6-point favorites, which was only one-third of their games.

Betting the Chiefs wasn’t as profitable during the 2020 regular season. After starting 6-2 ATS, the Chiefs dropped their next nine games against the number. Apparently, my positing that the Chiefs are the next great sports betting dynasty was all it took to slow them down.

However disappointing 2020 was for Kansas City bettors, the Chiefs continue to exceed expectations in games that, according to the NFL odds, they are less likely to win.

In the four games that Mahomes was shorter than a 6-point favorite, KC Points Bettors netted 24 units, 10 of which the Chiefs delivered in the AFC Championship while comfortably beating the Bills 38-24. In games where the Chiefs entered as at least 6-point favorites, the same bettors lost 28 units.

Things aren’t as counterintuitive as they appear.

For one, there’s a higher ROI when a team wins by 10 points as 3-point favorites than as six-point favorites. That much is obvious. From the oddsmakers’ point of view, though, betting lines, at least in theory, take this into account.

Able to more or less coast on Mahomes’ arm talent through the regular season, Hall-of-Fame coach Andy Reid saves his best tricks for when they matter most — a 2019 trip to Foxborough with home-field on the line, a Week 2 game against then-Super Bowl favorites, the Baltimore Ravens, and, of course, the postseason. On average, Kansas City covers the Points Bet line by five points in the playoffs, netting a whopping 25.5 units in do-or-die games since the Australian-based sportsbook launched in the U.S. two years ago.

Points Betting the Chiefs in the Super Bowl includes the half-point hook, which, for our purposes, turns a push into a loss. Considering the Chiefs are -3.5 elsewhere in the industry, we aren’t sacrificing much by Points Betting. The risk, in this case, is in the trenches.

Having entered the season without starting guard Laurent Duvernay-Tardif, the Chiefs subsequently lost starting linemen Kelechi Osemele and Mitchell Schwartz to season-ending injuries — so, no, this isn’t the same team that beat the 49ers.

After losing starting left tackle, Eric Fisher, in the fourth quarter of the AFC Championship, this isn’t even the same team that beat the Bills.

Ahead of a matchup with one of the league’s best pass rushes, uncertainty fills whatever holes are left on the offensive line. How you think the backup tackles handle the likes of Shaq Barrett, Jason Pierre-Paul and Co., will likely determine what side you’re on in the Super Bowl.

In my AFC Championship preview, I explained why it was a good spot to Points Bet.

“A 20-point victory at Arrowhead is well within the range of outcomes for Kansas City. On the other hand, the Bills beating the Chiefs by at least 10 points, while certainly not implausible, seems significantly less likely than a blowout on behalf of the home team.”

So ask yourself: Are the Chiefs more likely to beat the Bucs by two touchdowns or lose by eight? What’s their ceiling and what’s the floor?

I recall the Chiefs sprinting to a 17-0 lead against the Bucs earlier this season, before coasting much of the second half. Their offensive line will look different, but one way the Chiefs might adjust is by abandoning the run entirely, which in turn might raise their ceiling, and win points bettors big bucs in the process.

Points Betting isn’t restricted to the spread and total. Think Hill will have another massive game against the Bucs’ porous secondary, or that Rob Gronkowski will be a non-factor in the passing game? If you’re in Colorado, Iowa, Illinois, Indiana, Michigan, or New Jersey, you can Points Bet Super Bowl props, too.