Over the past two weeks, Garoppolo completed 46-of-70 passes for 627 yards, two touchdowns and two interceptions while Tom Brady went 45-of-73 for 485 yards, one touchdown, and three interceptions,
so clearly the 49ers won that trade.

All jokes aside, Garoppolo’s sterling yards per attempt average of 9.0 and his 66.7% completion rate have been impressive. As a home favorite against a Titans defense ranked 23rd in pass defense DVOA, per Football Outsiders, Garoppolo should continue to impress, and Goodwin would likely play a major role in that after posting receiving lines of 8-99 and 6-106 in Garoppolo’s two starts. Goodwin leads the team with a 41% air yard share and a 29% target share over that span, per airyards.com. No other 49er has more than a 12% air yard share or a 13% target share.

The Garoppolo-Goodwin stack may not be the only factor to force Tennessee’s hand in the passing game: the Titans have struggled to run the ball on the road all season, averaging just 3.5 yards per carry away compared to 5.3 at home. Walker’s 23% target share leads the team and is tied for third in the league among tight ends. He has least five catches and 63 yards in six of his past seven games.

Woods’ return from a shoulder injury is going overlooked in terms of its impact on Goff: at the time he began missing games in Week 12, Woods had nine catches and 222 receiving yards more than any of Goff’s other receivers. Pro Football Focus charts Woods as lining up on the right side 57% of the time, meaning he projects to run the majority of his routes at Richard Sherman’s vacated spot. And more potentially crushing vacancies loom: linebacker K.J. Wright (concussion) is unlikely to clear protocol in time and fellow linebacker Bobby Wagner (hamstring) is iffy.

We usually like to use a team’s No. 1 receiving option in opposing passing game stacks, but since Week 10, Richardson quietly matches Doug Baldwin’s team-leading 28% air yard market share. And despite the Seahawks having trailed this season on only 44% of their offensive plays, 60% of Richardson’s targets, 70% of his receiving yards, and five of his six touchdowns have come when Seattle is trailing—by far the largest discrepancy among Seattle’s starting pass catchers. Over the past five weeks, eight different wide receivers have caught at least five passes against the Rams, who will be without starting right cornerback Kayvon Webster (Achilles). 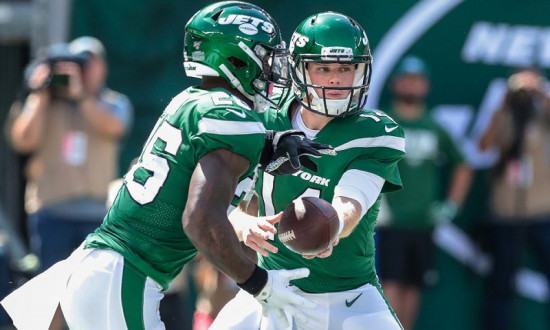 Bell goes up against a Patriots defense that is ranked dead last in run defense DVOA and probably can’t sell out against the run because it has to contend with Antonio Brown, who has infinity catches for infinity yards over his past four games.

The matchup is just syrup on the waffles, though, given Bell’s heavy workload: he leads the league in touches per game (27.5) and is second among running backs in targets per game (7.1).

Bell’s usage in the passing game is particularly significant as New England has allowed the third-most receiving yards (686) and tied for the third-most touchdown catches (four) to running backs. Over the past four weeks, only two wide receivers top Bell’s 36 catches, and only nine best his 336 receiving yards.

In eight games prior to Baltimore’s Week 10 bye, Collins averaged 12.0 touches per game on 28% of the snaps. In four games since, those figures jump to 19.8 touches per game on 52% of the snaps. Even with Danny Woodhead having returned after the bye, Collins also upped his receiving usage from 0.6 targets and 0.4 catches pre-bye to 3.3 targets and 2.5 catches post bye. The Browns, meanwhile, have allowed the past four lead backs they’ve faced to gain an average of 126.8 yards from scrimmage, with each one surpassing 100.

With Williams listed as doubtful, Kenyan Drake is in line to again be Miami’s feature back, a role which he parlayed into 26 touches for 141 total yards and one touchdown two weeks ago at home against Denver and 30 touches for 193 yards last week at home against New England. While expectations should be tempered with the Dolphins departing sunny Miami for blustery Buffalo, Drake’s matchup on paper could not be better: the Bills are allowing the most schedule-adjusted fantasy points in the league to running backs. As Sammy Reid notes in this week’s NFL Reid Option (available to Premium users), Drake would be priced a lot higher if his 30-touch, 193-yard rampage against New England didn’t occur once pricing had already dropped.