We already know how good Josh Norman is, and Washington’s other cornerback, Bashaud Breeland, has held his own so far as well, allowing just 3 catches through two games so far this season. Meanwhile, Washington’s linebackers have gotten torched for 16-of-19 passing for 203 yards and 2 TDs. What’s more, inside linebacker Mason Foster (shoulder) is banged up and missing practice time. Washington’s safeties have struggled as well, allowing 10-of-12 passing for 181 yards and a TDs, and now rookie Montae Nicholson will be rotating with 2015 undrafted free agent Deshazor Everett.

This matchup sets up well for the Raiders to exploit with their ancillary weapons such as Seth Roberts, Jalen Richard, DeAndre Washington, and most notably, Jared Cook. There’s a chance Cook plays a featured role and delivers against a Redskins defense that is ranked 29th in DVOA versus tight ends and has given up 208 yards to tight ends through two games—35 more than any other team. Cook is third on the Raiders with an 18% target share and provides a cheap way to gain exposure to the Raiders’ implied team total of 28-plus in a game with an over/under hovering around 54 points. 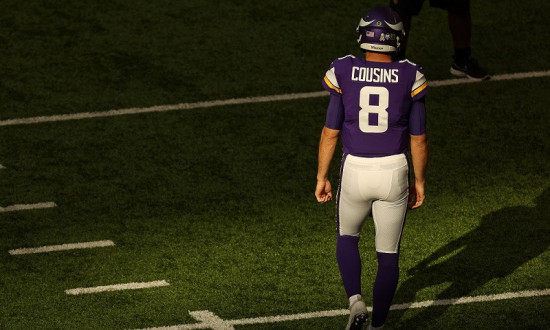 The best way to take advantage of the correlation between the other side of the ball is pairing Terrelle Pryor with Kirk Cousins. While Cousins should have a few good matchups to exploit—even if Jordan Reed is out—it’s Pryor who is the most likely to put Cousins’ box score over the top. While Pryor has been targeted by Cousins an average of 13.0 yards downfield, no other Washington wide receiver or tight end has been targeted more than 7.0 yards downfield on average. Cousins’ slow start numbers-wise (209.5 yards, 1.0 TDs per game passing) can be directly attributed to a lack of deep-ball success thus far. Whereas last season 40.0% of Cousins’ TDs and 33.7% of his yardage came via passes thrown 16+ yards downfield, this season he’s completed only one such pass for 16 yards. Likewise, 24.7% of Pryor’s 1,007 receiving yards last season came on such passes. Natural regression to the mean is likely regardless, but the probability is enhanced by a Raiders defense that has allowed 14.7 yards per attempt and 8 TDs on such passes since the start of last season, both third-worst in the league. Pryor should most often line up against David Amerson, who is Pro Football Focus’ No. 78 rated cornerback through two weeks.

When measured over a large historical sample size, a team’s No. 1 and No. 2 running back have a negative correlation in terms of fantasy scoring. But every once in awhile, a perfect confluence of factors unite to make them an intriguing option. This is one of those times.

The Saints offense is likely to struggle in Carolina, where Drew Brees hasn’t thrown for 3 TDs since 2007, or 300 yards since 2012. He will likely be without both of his starting tackles, Terron Armstead (shoulder) and Zach Strief (knee). I caution against taking the Vegas lines as gospel, but the fact that the Saints opened with an implied total of 21.5 points (which has since been bet down even more) should tip us off that they don’t have much going for them. All of this puts the Panthers DST in play, and it will also likely lead to a decisive time of possession advantage for Carolina. That correlation is key to this stack hitting; in Week 1 against the 49ers, the Panthers had the ball for 34:21, allowing Jonathan Stewart and Christian McCaffrey to combine for 38 touches. On the season, the backfield duo has combined to account for 65% of Carolina’s touches. Meanwhile, the Saints are allowing 4.4 yards per carry and 8.4 yards per target to running backs, with linebackers A.J. Klein and Alex Anzalone standing out as the weakest links in the league’s weakest defense. Last week, the Saints allowed Patriots running backs to pile up 49 DraftKings points and 42.5 FanDuel points. Given that the Patriots running backs accounted for only two of their four TDs, there was upside for even more.

Even if this stack doesn’t completely hit, because Stewart and McCaffrey account for two-thirds of the Panthers offense, the floor should be high enough to still comfortably cash if the rest of your lineup is solid.

Kareem Hunt at Chargers: 62% on FanDuel and 54% on DraftKings

(Note: For a complete explanation of how these baselines and odds are calculated, see the Week 1 edition of this column.) 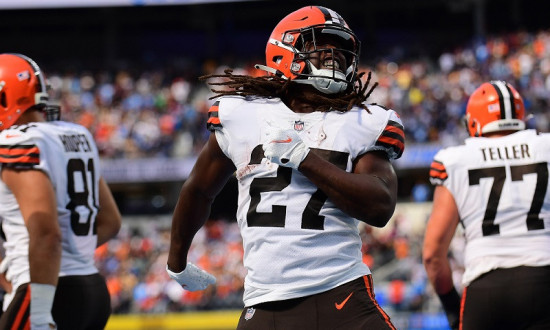 As crazy as it sounds for a running back who leads the league in rushing yards (229), receiving yards (126), and total TDs (5), Hunt hasn’t even been fully unleashed yet. The Chiefs have run 116 offensive plays through two games, ninth-fewest in the league. The Chargers, however, have allowed opposing offenses to run 136 plays, the fourth-most in the league. This bodes well for Hunt, who has accounted for 95% of Kansas City’s running back touches despite averaging “only” 19.0 touches per game. Despite how the modest efficiency numbers look (3.7 yards per carry), opponents have been able to execute sustaining rushing attacks in both games against the Chargers, with opposing running backs racking up 31 touches in each game. Don’t be surprised if Hunt sets a new career-high in touches this week. Hunt’s 7.6 yards per carry and 15.8 yards per reception will surely regress to the mean, but he’s given us no reason to believe his “mean” isn’t as high as any running back in the league.

The Patriots offense always tends to produce lofty TD totals for its power backs, who have combined for double-digit TDs in four of the past five seasons, but Mike Gillislee has a chance to best LeGarrette Blount’s 18 TDs from a season ago. Why? The Patriots are running the ball on 81.8% of their offensive plays inside the 10-yard line. While that absurd rate is sure to regress (the league average is 47.8% this year), there’s historical precedent for New England’s running game to produce in a situation like the one upcoming this week against Houston. New England is a 13-point favorite at home, and in five games home games since 2015 as a double-digit favorite, the Patriots have averaged 32.8 rushing attempts, 125.2 yards, and 1.6 TDs per game. New England’s average time of possession in those games as been 34:07, which is, of course, conducive to piling up rushing volume. With the Texans offense averaging a league-worst 3.6 yards per play, New England is likely to handily win the time of possession battle.

In fact, the Patriots DST makes for a great pairing with Gillislee. In those aforementioned five games, New England allowed only 11.2 points per game while racking up 2.4 takeaways per game. And don’t forget they’re facing a rookie quarterback making his second ever NFL start on the road.

Many of the biggest surprises in DFS occur when we don’t properly account for the effect of the battle in the trenches. When offensive line play is cited, it is more often done so in reference to the running game. But the pass rush has a major impact on all fantasy-relevant players involved in a game. If a team struggles to get pressure on the quarterback, it’s easier to convert third downs and march toward the end zone, and NFL quarterbacks post markedly better statistics in a clean pocket. The absence of one pass rusher may seem trivial on the surface in a game that was already expected to be high-scoring, but Beasley led the NFL with 15.5 sacks last season—45.6% of Atlanta’s total—and his absence further increases the likelihood of a monster game for Matthew Stafford, and thus, a probable shootout. When kept clean, Stafford is completing 78.4% of his passes with 5 TDs on 42 attempts (11.9% TD rate), but when under pressure, his completion percentage drops to 55.0% and his TD rate drops to 5.0%, per Pro Football Focus.

The tournament implications are obvious, but a clean pocket decreases cash game risk as well. For example, many will go with Kirk Cousins over Stafford this week due to the slight discount, but Cousins is inherently riskier because a pass-rusher like Khalil Mack, who had 11.0 sacks last season, is always liable to come alive and ruin an offense’s day.