And was the 2-game slate … good? Tough to lose what would’ve been the best game of the day but how many of us were gonna stay awake for it? Better to succumb to the tryptophan as Kevin McCallister eludes Marv and Harry than during the BAL/PIT showdown.

In this week’s edition:

Not on our email list? Subscribe to the RG newsletter and get it right in your inbox every Friday!

DID ANYONE EVEN PLAY THESE GUYS?!

It’s safe to say most DFS players were NOT thankful for the touchdown distribution in the HOU/DET game.

The Lions’ three scores went to Adrian Peterson (2) and Mohamed Sanu (1). J.J. Watt (pick-six), C.J. Prosise and Duke Johnson all reached the end zone for the Texans in the first half.

So did anybody even play these guys? Here’s a quick breakdown of the ownership from DraftKings’ $2.5M tournament:

Among the players that had more ownership than these guys, DeAndre Swift (out with a concussion) was ahead of Prosise and Chase Claypool (game canceled) was ahead of Sanu. Oh, and Ezekiel Elliott (plays for Mike McCarthy) had twice as much ownership as Johnson.

Want to check out more ownership stats and tournament scores? Head over to Results DB (free).

The college basketball season kicked off Wednesday night, and our subscribers got off to an amazing start. RG users finished 1-2-3-5-7-8 in the $100K tournament on DraftKings. Congrats! 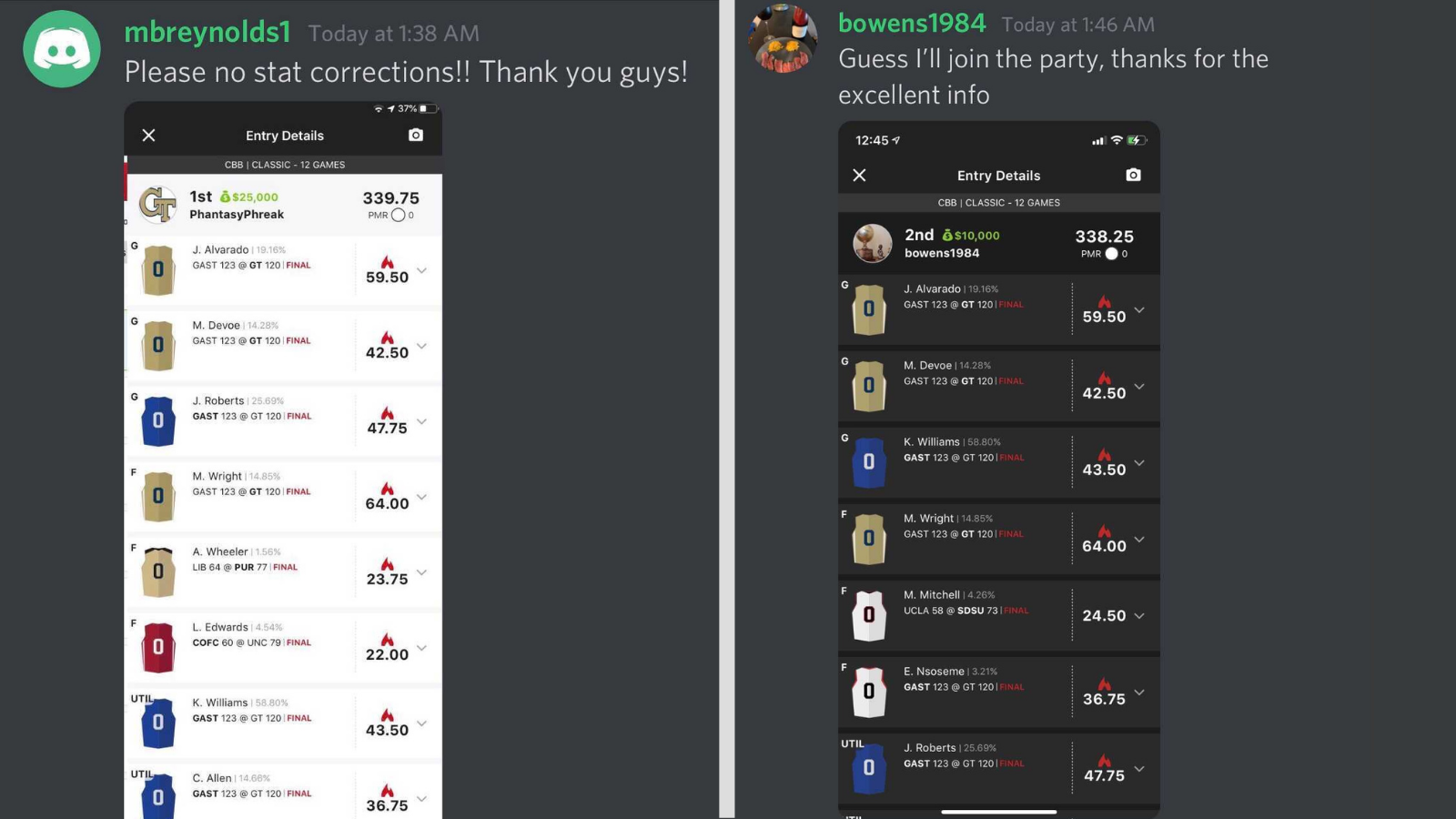 BEST BETS FOR NBA ROOKIE OF THE YEAR

“We want to find guys that are capable of putting up the best numbers based on their team’s situation — the ROY winner doesn’t necessarily have to be on a “contender,” per se. When it comes down to it, I think a player with significantly better stats on an ‘okay’ team is more likely to win this award than a player with a more marginal role but on a winning team.”

The Ravens-Steelers game has already been moved from Thursday to Sunday, and ESPN reported that Baltimore can’t get into their training facility until Monday at the earliest. If they somehow end up playing in Week 12, the Ravens would be without “(player-popup #lamar-jackson)Lamar Jackson”:/players/lamar-jackson-328097.

With a potential forfeit on the table, we might be losing a crucial AFC North matchup. But who cares about that! The most important thing is our best ball shares heading into the playoffs.

Are Ben Roethlisberger-led teams cooked? Will Mark Andrews resurgence be for naught?

If you’re sweating Marquise Brown production, maybe missing the playoffs is for the best.

THE MORE YOU KNOW

DFS Dictionary (courtesy of Alex Hardin): Adjusted Tempo – An estimate of the tempo (possessions per 40 minutes) a team has versus a team that plays at an average tempo. By comparing adjusted tempo between two teams, you can tell if a team is expected to have more or less possessions than normal. More possessions generally equals more opportunities for fantasy points.

Schmitto’s Sharp Money: Texas Tech +3000
Without a doubt this is one of the deepest teams in the country. [Head coach Chris Beard] has to figure out how to make everyone happy since there are so many mouths to feed. If he can make the pieces fit, they’ll be a contender in arguably the best college basketball conference in the nation. … READ MORE

Nicole’s Knowledge Nugget: If you like to set min and max exposures on players in LineupHQ, it’s handy to open up the sidebar on the right-hand side and view your position exposure totals as you go through the build process. This lets you see if you have too much or too little exposure set at a particular position.

Not on our email list? Subscribe to the RG newsletter and get it right in your inbox every Friday!