How the Wall-Westbrook Trade Impacts NBA DFS and Wizards Futures 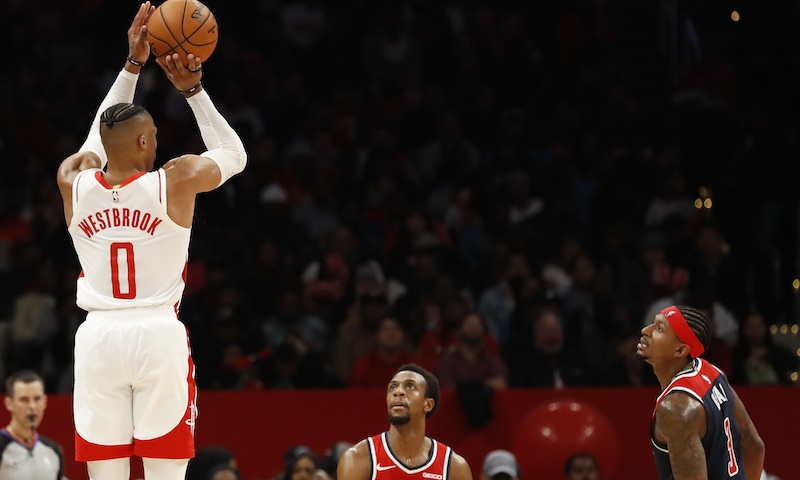 On December 2, 2020, the Washington Wizards and Houston Rockets agreed on a trade to swap their high-paid point guards, John Wall and Russell Westbrook. In addition to sending Wall to the Rockets, the Wizards are also including a future first round pick in the deal that is lottery-protected.

My goal in this article is to discuss how this trade ultimately affects the on-court product for both teams in the upcoming season that is suddenly just two weeks away, and subsequently, the fall-out from an NBA DFS and sports betting perspective. Will rostering players against the Wizards still be as attractive as it was last season? Is there any value to be found in the win total for the Wizards when it comes to season-long NBA bets? These are some of the questions I will be looking to answer.

To begin, let’s look at this trade from the eyes of the Washington Wizards.

If we are looking at strictly how these teams fared from this trade based on the talent of the players involved (i.e. removing the salaries and the draft compensation from consideration), it is hard to argue the fact that the Wizards got the better player. If nothing else, I state that simply because, when the Rockets open their season on December 23rd, they will essentially be two years removed from when John Wall played in his most recent NBA game.

As crazy as it is to comprehend, Wall’s last game was on December 26, 2018. The Wizards announced after that game that Wall was having season-ending surgery on his left heel. And soon after that procedure took place, Wall “slipped and fell in his home”, rupturing the Achilles tendon in that same heel. Fast forward two years, and Wall is set to make his return with a different team. When your game is predicated almost entirely on other-worldly speed, it’s fair to question exactly what kind of player Wall is going to be upon his return. And say what you want about Russell Westbrook, but the guy is still a very good NBA basketball player.

Sometimes our perceptions of these players get warped when we talk about their salaries and how they compare to other “superstars” who get paid the same (or sometimes less). Just because Westbrook may be “overpaid” doesn’t mean he still isn’t an effective player. Whether you agree with it or not, he was still voted All-NBA Third Team last season. Need I remind you about that elite stretch he went through at the start of the calendar year? The guy averaged 32+ points per game in January and February.

The long and short of it though is that, unless Wall makes a shockingly impressive recovery from one of the more devastating injuries an athlete can have, the Wizards got the better player here. And considering Wall hasn’t been able to play a game for them in so long, they also clearly upgraded their team compared to the last season and a half.

One of the first things I want to discuss here for this new-look Wizards team is that keyword we always hear when talking about NBA DFS: pace.

Will the Wizards Play Even Faster This Season? 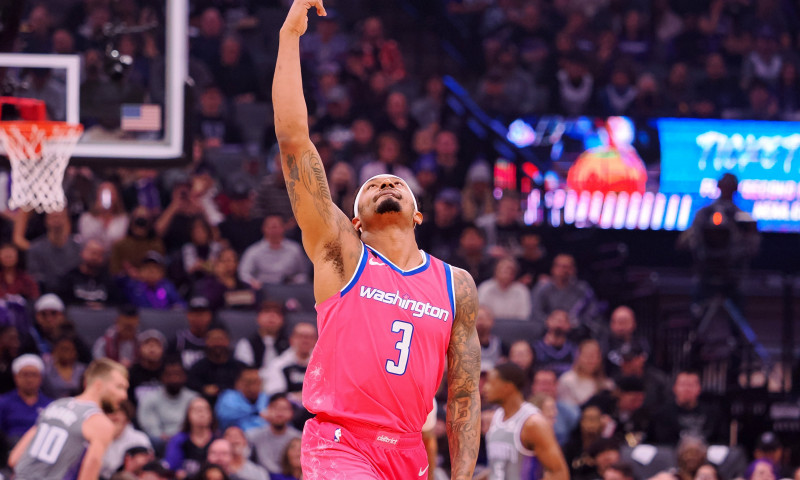 Last season, the Wizards played at the fifth fastest pace in the league (103.38). They essentially had three point guards on their roster who averaged 15+ minutes per game at varying times during the season: Isaiah Thomas, Ish Smith, and Shabazz Napier. Here is the pace that each of those players played with:

Care to guess what pace Westbrook played at last season with the Rockets? 107.33! That was the seventh fastest pace of any player in the league that averaged 15+ minutes per game. During the 2018-19 season (with Chris Paul on the team), the Rockets played at the fourth slowest pace in the league (98.39). Enter Westbrook for the 2019-20 season, and they shot up to the second fastest team in the league (104.04).

You can make a legitimate case that this version of the Wizards is going to lead the league in pace for the 2020-21 season. Faster pace means more possessions, and more possessions equals more opportunities for fantasy points. Add in the fact that the Wizards (second to last in defensive efficiency) were one of the worst defenses in the league last season—an area I don’t foresee Westbrook being a huge upgrade in—and we are going to want to roster players facing the Wizards early and often in NBA DFS.

PointsBet has the Wizards regular season win total set at 33.5. And remember folks, we only have a 72-game regular season this year due to all of the uncertainty. Interestingly enough, that is exactly how many games the Wizards played last season too, as they finished 25-47.

And while 33.5 wins may seem like quite a big expected jump from last season to this season, let’s not forget that they played all eight of their games in the bubble without Bradley Beal or Davis Bertans. Predictably, that did not go very well from a win/loss perspective; they went 1-7 down in Orlando.

As I alluded to earlier, the addition of Westbrook is a clear upgrade for this team. In that pace section up above, did you happen to truly take note of who their point guards were last year? No offense to IT, Ish, or Napier, but Westbrook is several tiers above them when it comes to NBA talent. We can argue all we want about how “good” Westbrook is — there should be no such argument, however, about how much better he is than those three.

The last thing to note here is that the NBA will have another play-in tournament before the playoffs this season, this time extending it out to “9th” and “10th” seeds. That will make it even less likely that a bunch of teams tank in 2021. And you can certainly cross the Wizards off of any tanking list; all reports are that owner Ted Leonsis is eager to get this team back into the playoffs.

So with all of that in mind, I’d actually side with betting OVER 33.5 wins for the Wizards. For that to hit, they’d need to go at least 34-38 this season, and I think that is absolutely within reach as they compete with teams like Orlando, Atlanta, and Other Random East Team (Chicago? Charlotte?) for seeds #8-10 in the Eastern Conference. 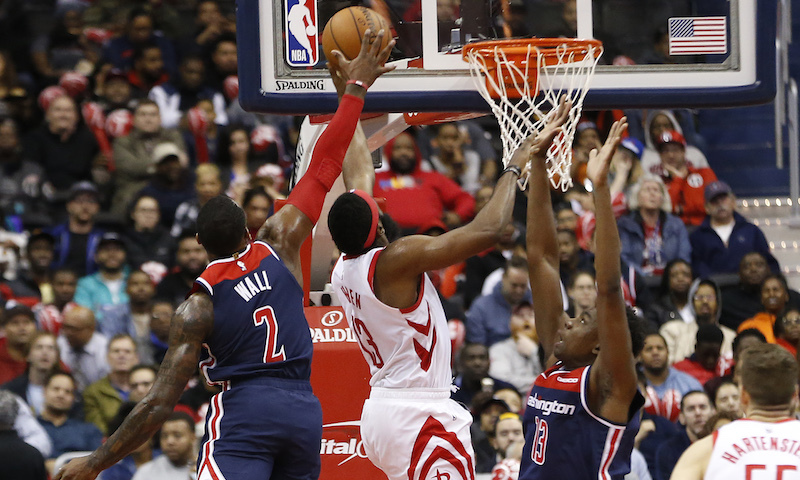 I purposely saved the Rockets for last because I honestly have no idea what to expect out of them this season. Think about how much the landscape of this organization has changed in just the last few months.

Oh, and there’s also that little thing of THEIR FRANCHISE PLAYER NOT WANTING TO BE THERE ANYMORE. For those of you that are just now diving back in head first to the NBA happenings, James Harden has made it known that he wants to be traded, with the Brooklyn Nets being his preferred destination. And at the time I am writing this (morning of December 7th), Harden hasn’t even reported to training camp yet.

So at this point, we can really only speculate how this team will look once the real game start in a few weeks. The way I see it, this can go one of two general ways.

Scenario #1: Harden stays with the Rockets

I see this as the less likely scenario, but I do suppose the Rockets organization is willing to wait this whole thing out considering Harden is signed through the 2022-23 season (player option in the third season). Harden could soften his trade stance, reaffirm his commitment to Houston, and come back and do Harden things. For what it’s worth, Silas (their new coach) was an assistant coach the past two seasons for the Dallas Mavericks, which happened to coincide with the first two seasons of Luka Doncic. If Silas is willing to run a similar system that Carlisle did in Dallas (or that D’Antoni did with Houston), you’d have to think that would be appealing for Harden.

Scenario #2: Harden is traded at some point before or during the season

This scenario seems far more likely though, as it feels like the writing is on the wall at this point. And unless they somehow can get Ben Simmons in a trade with Philly, I think this team is going to be in full-on rebuilding mode. And even in that best-case scenario (I haven’t heard any realistic rumors that are better than Houston getting Simmons for Harden), it is tough to envision them not dropping a couple of tiers in a loaded Western Conference.

So where does that leave Houston in terms of DFS and the over/under on their regular season wins? Well, due to the uncertainty surrounding Harden’s future, the online sportsbooks I use have pulled down anything pertaining to Houston’s regular season wins. And I have written previously why I don’t like Harden’s MVP odds either, so that pretty much (un)checks all of the boxes for this team in the sports betting world.

As for DFS purposes though, we can make some educated guesses. If Harden does end up staying in Houston, I think it is likely they end up playing at a much slower pace this season. I already alluded to the “Westbrook Effect” up above as it pertained to their pace last season. So with D’Antoni and Westbrook gone—and Silas and Wall in—I’d guess Houston’s pace would land somewhere in the middle of the league this season with Harden and Wall. Wall likes to play fast too, but few in the league are at Westbrook’s level.

As for their defense, my guess is that the Rockets would slip a little too on that end of the floor in this scenario (they were 15th in defensive rating last season). That being said, I don’t think it would be enough to negate the expected drop in pace.

And if Harden gets traded? Who knows! Until we know what they get back if and when Harden is traded, we would just be guessing at far too many things. If they got Simmons, they would probably take a huge step back in offense, a step up in defense, and want to play pretty fast to maximize Simmons’s best attributes. If they got some of the Nets young pieces (e.g. LeVert, Dinwiddie, etc.), they could very well make for one of the better matchups in the league from a DFS perspective. But again, we just won’t know until a trade goes down.

One thing we do know though is that this Harden situation is going to result in endless intrigue until the situation resolves itself. And with the regular season beginning in 15 days, I expect something big to happen sooner rather than later.