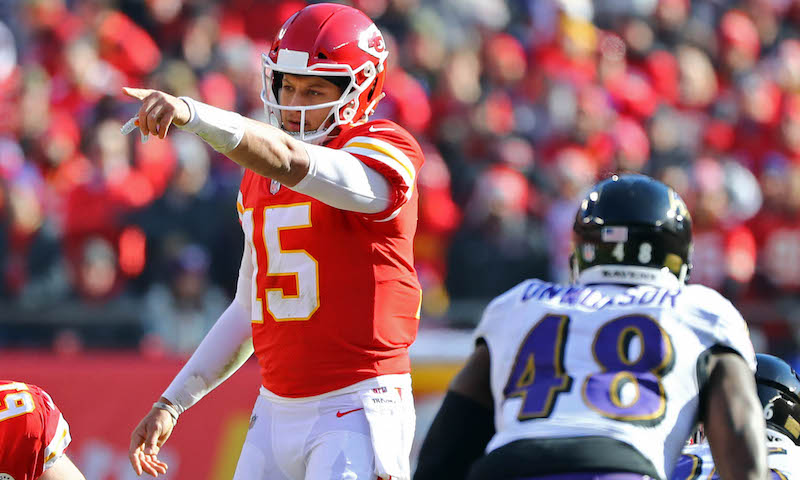 The clock is ticking. Soon, the Kansas City Chiefs and Tampa Bay Buccaneers will kick off Super Bowl LV. And if you’re like me, you’re wisely using every waking minute between now and 6:30 PM ET Sunday to scour online sportsbooks for the best odds and most interesting Super Bowl bets available.

I’m not banking on a first score safety, but I’ve found three longshot Super Bowl props that sound crazy but with the slight stretch of imagination actually make sense.

But bettor beware: what you’re about to read, the bets you’re about to make, are not for the faint of heart. A strikeout is more likely than not — however, one hit is enough to make a profitable Super Bowl Sunday.

If your appetite is geared toward a more modest menu, check out some SB LV bets from our friends at SportsHandle. I hear there’s a prop involving a pair of punters and a famous tennis player that you won’t want to miss.

Whatever the case, bet at your own peril.

[Also Read: Points Bet the Chiefs for a Big Payout ]

Known by his nickname “Sausage” in the Chiefs’ locker room, fullback Anthony Sherman plays mostly on special teams and short-yardage situations; you could call it where the sausage is made.

As a result, Sherman has reached the end zone only five times in his eight seasons with the Kansas City Chiefs. This year alone, the “sausage with hands,” as Andy Reid once described him, has been given merely four touches.

So why on earth should we think he’ll touch the football in the Super Bowl? Let’s rewind to Week 2, a time when the Ravens, not the Chiefs, were Super Bowl favorites.

As the Chiefs traveled to Baltimore as 3.5-point underdogs, there was good reason to believe the high-profile Monday Night Football game might determine which team would have first-round bye and home-field in the playoffs. Meanwhile, Andy Reid was thinking about “The Smoked Sausage,” an offensive play designed for the Chiefs’ fullback in the red zone.

Indeed, the sausage was smoked.

Mahomes with the underhand toss to Anthony Sherman! 😱

Reid placed his order on the five-yard line with a 6-3 lead in the second quarter, evidence that the play is for high-leverage situations, not garbage time charity for a veteran fullback who does his fair share of dirty work.

Kansas City’s head coach isn’t one for diets — he’ll admit as much. After beating the 49ers 31-20 for his first Super Bowl victory, the future Hall-of-Famer said he would celebrate with “the biggest cheeseburger you’ve ever seen.” On Monday, he said he plans to make it a double cheeseburger this time.

However, Reid isn’t as gluttonous with his playbook.

That night in Baltimore marked the last time Patrick Mahomes was an underdog, and, until the playoffs, the last time the Chiefs coaching staff was willing to put it all on the table.

With the Lombardi Trophy and a double cheeseburger on the line, though, don’t be surprised if the Chiefs deliver the Bucs a helping of smoked sausage in the Super Bowl.

Both the Buccaneers and Chiefs have running back committees. The Bucs swap Ronald Jones and Leonard Fournette throughout the game, while Darrel Williams and Clyde Edwards-Helaire take turns for the Chiefs.

After losing starting left tackle Eric Fisher in the AFC Championship, the Chiefs must fill a major hole on the offensive line against a defensive front that helped the Bucs become the No. 1-ranked DVOA against running backs.

One adjustment they can make is to abandon the run almost entirely. The Bucs’ pass rush is fierce, to be sure, but Mahomes should be able to handle the pressure.

Look at the box score from when the two teams played in the regular season. The Chiefs handed the ball to their running backs a combined 16 times despite jumping out to 17-0 lead in the first quarter. Opting to attack the Bucs through the air instead, Mahomes had a season-high 49 pass attempts and 462 yards by the end of the game while carrying the ball four times for 28 yards — nine shy of Edwards-Helaire’s 37.

As for the Bucs, they’ll try to establish the run with Jones and Fournette, but the Chiefs’ potent offense may force their hand sooner than later, as it did in Week 12. Forced to play catch-up, Jones and Fournette combined for only 12 carries. Jones did break a few big plays on his way to 66 yards, but there’s no guarantee he’ll do so again.

During a season in which Mahomes was hesitant to run, he still managed to rush for at least 36 yards on three different occasions, including a season-high 54. In total, Mahomes has rushed for at least 50 yards in 11.3% of his career games, and twice in seven playoff starts.

Another 50-yard rushing performance against the Bucs could feasibly lead the field in rushing yards, and with +1600 odds — implied probability of 5.6% — next to Mahomes at BetMGM, there might be a sliver of expected value as long as you believe a case of turf toe didn’t follow him to Tampa.

Hill and Hardman won’t have as many rushing opportunities as Mahomes but, with their explosiveness, a touch or two may suffice.

Hardman’s speed was on display against the Bills when he broke a single carry for 50 yards. Also, it wouldn’t be the first time if the Chiefs throw in packages with Hill at running back. Again, all he needs is one big play. They don’t call him The Cheetah because he’s slow.

That’s the actual name of this bet at DraftKings Sportsbook. And here’s why you should make it:

With second-stringers stepping up and Mike Remmers moving from right tackle to left tackle for the Chiefs, it wouldn’t be out of character for Reid, who played on the line at BYU, to feed one of the fat guys a touchdown in garbage time if the Super Bowl gets out of hand.