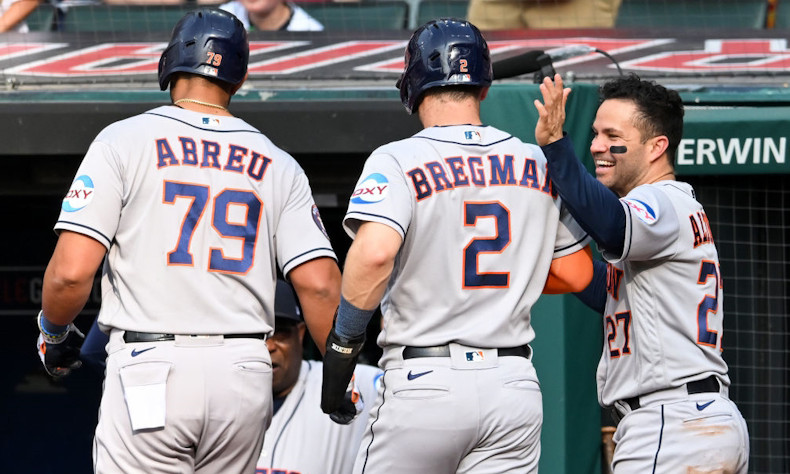 On Sunday evening, the Houston Astros and the Atlanta Braves will play Game 5 of the 2021 World Series at Truist Park. The Braves erupted for five runs in the first three innings in Game 1 en route to a 6 to 2 victory. The Astros scored five runs in the first two innings of Game 2 on their way to tying up the series. In Game 3, Ian Anderson threw five no-hit innings, and the Atlanta offense scraped across two runs to swing the series back in their favor. Game 4 was once again low-scoring with the Braves narrowly securing a 3-2 victory to bring them within one game of winning the title. This evening, Houston will send Framber Valdez to the hill as they look to keep their season alive. Atlanta will counter with Tucker Davidson. Oddsmakers are expecting a tightly-contested affair, pricing Houston as -120 road favorites on the money line.

Let’s take a deeper look at the matchup to see where bettors can find value at sportsbooks for Game 5 of the World Series in Atlanta.

Valdez missed the beginning of the campaign due to injury, but was excellent in 22 starts once joining the rotation—posting a 3.14 ERA, 3.78 xERA, and a 4.01 FIP. Fortunately for Houston fans, Valdez was at his best this season when pitching away from Minute Maid Park, delivering a 3.86 FIP and a 1.14 WHIP on the road. Valdez allowed six earned runs in his first seven innings of work this October, but was dominant over eight innings in his second start of the American League Championship Series. Valdez was tagged for five earned runs in the World Series opener, but he should have a much stronger outing in this one, considering that he is a better pitcher on the road and has the benefit of cooler, outdoor weather in Game 5. Valdez has been admittedly volatile for bettors to trust this October, but he is likely to keep the Astros competitive in this one for as long as he remains on the mound.

Facing southpaws this year, the Astros ranked fourth in OPS, fifth in ISO, 14th in walk-rate, and had the best strikeout percentage of any lineup in the league. The Astros have scored five or more runs in 10 of their 14 postseason games this October, but this offensive has struggled in the World Series—posting a dreadful .588 OPS as a team through four games. Jose Altuve, Michael Brantely, Alex Bregman, Yordan Alvarez, Carlos Correa, Kyle Tucker, and Yuli Gurriel form one of the most talented lineups in the league on paper. Sooner rather than later, this unit is going to return to being dangerous as we saw in the first two rounds of the postseason. The colder weather could give this Houston lineup trouble tonight, but expect disciplined at-bats from this group, and for Houston to create at least a few run-scoring opportunities with their season on the line.

Houston’s relief unit has been surprisingly reliable for the most part during this postseason. Ryne Stanek, Phil Maton, Kendall Graveman, and Ryan Pressly have formed a dominant foursome at the backend of this bullpen. As the series progresses, the main concern for Manager Dusty Baker is the same concern that his opponent faces—a lack of depth. After forcing the bullpen to cover seven innings in Game 1, Baker was forced to use four relievers in Game 2 after Urquidy was removed after just five innings of work. Luis Garcia lasted only 3.2 innings in Game 3, prompting Baker to use five relievers, including Stanek and Graveman, in a losing effort. Houston received a surprising amount of length from Zack Greinke yesterday, but the Astros were still forced to cover four innings with relievers—allowing three earned runs in the losing effort. Regardless of usage, it is likely that everyone is available for Game 5 as Houston tries to force a trip back home.

After starting Dylan Lee in Game 4, the Braves are once again going with an inexperienced arm on the hill in Game 5. Davidson has only 21.2 innings of MLB experience under his belt entering play this evening. During the regular season, he had a 3.60 ERA, 5.96 xERA, and a 4.52 FIP in four starts. He has yet to appear in a game this postseason. Thus, he is an extremely difficult person for bettors to trust on the mound in this one. Davidson has not pitched in the big leagues since June. He could find life difficult tonight against a dangerous Houston lineup.

Against left-handed pitching in 2021, Atlanta ranked 20thh in OPS, fourth in ISO, 10th in walk-rate, and 23rd in strikeout percentage. Eddie Rosario, Freddie Freeman, and Jorge Solder have all been elite this postseason, each posting an OPS of .945 or better. Ozzie Albies saw his bat wake up in Game 1, but has not made much of an impact on this series since that point. The Braves have scored five runs or more in four of their last nine games. However, they also have three games in that stretch in which they have scored two runs. This is a volatile offense that is hard for bettors to trust on a nightly basis. Though this unit had success against Valdez in Game 1, Atlanta is not a great offense against southpaws. It could be a struggle to put runs on the board tonight.

Manager Brian Snitker has been recklessly aggressive with his top bullpen options this postseason, but it has proved to be a successful strategy to this point. Tyler Matzek has appeared in 12 of Atlanta’s 14 playoff games. Luke Jackson has been called upon 11 times. Will Smith has made 10 trips to the mound. Matzek, Jackson, and Smith appeared each of the last two days, but this postseason has demonstrated that these three important arms are going to be available, regardless of usage concerns. Expect Snitker to be extremely aggressive with his bullpen in this contest as he seeks to avoid a plane trip back to Houston.

These are two evenly-matched teams and the price on the money line reflects that fact. Playing the side in this game, the smart lean is towards the Astros. Houston has the better starting pitcher and the better offense in this contest. There are risks due to Valdez being inconsistent this October, but there are even more concerns trusting a pitcher that has not faced an MLB lineup in four months. B

Bettors’ best approach in this one is on the total. Similar to the weather conditions from the last two nights, the temperature is forecasted to be in the low-50s. For the third night in a row, conditions are not conducive to hitting the baseball out of the yard. Bettors should consider a small wager on the under in this one, despite the fact that there are two hittable pitchers on the mound to begin this game.