With Week 14 now in the books, we are headed into the final stretch of the season, giving us just a few more chances to identify DraftKings’ values as the 2020 season winds to a close. 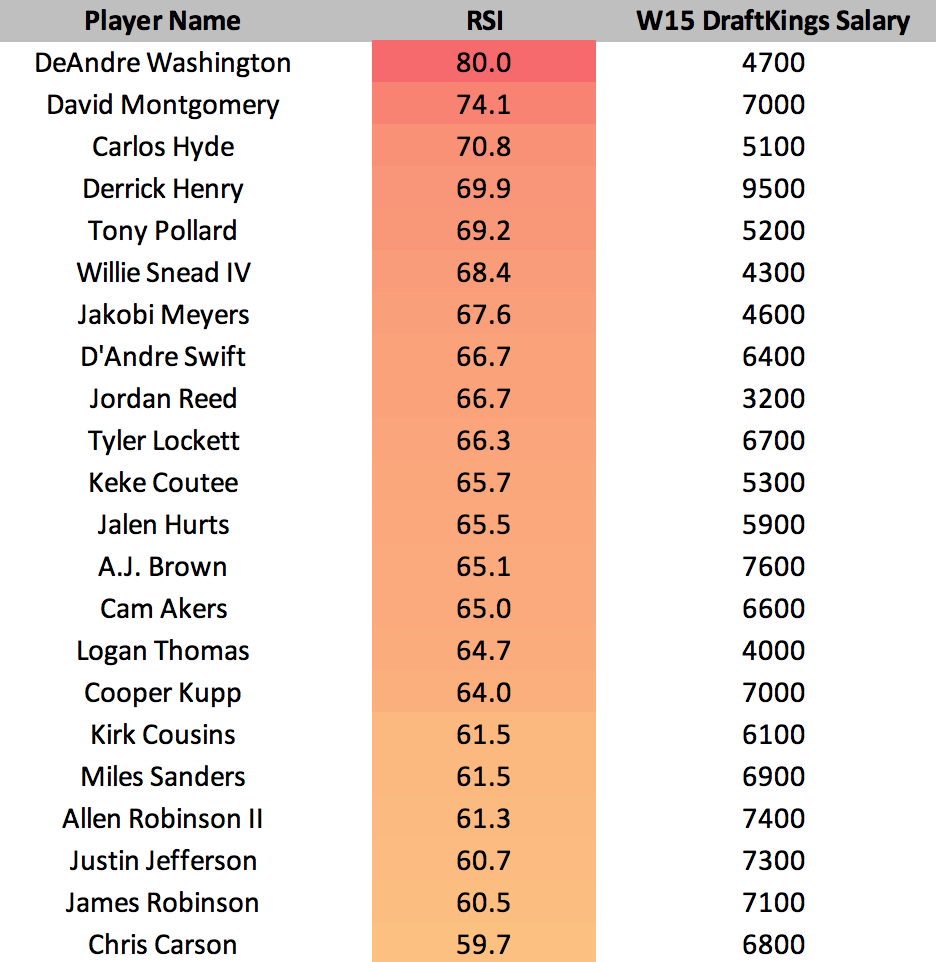 The Lions’ RB saw 11 total touches and a 53% snap share in Sunday’s loss to the Green Bay Packers after missing the previous three games due to injury. Even if the Lions are easing Swift back into a substantial role, it’s still concerning that the likes of Adrian Peterson and Kerryon Johnson are still factoring into the equation. Heading into a less-than-favorable matchup against Tennessee, the Lions are looking at a repeat of their 77% pass rate in Week 14 as underdogs yet again in Week 15. While Swift is a great runner, he’s trapped on the sinking ship that is the Lions’ offense, and it doesn’t look like he’ll get a life raft by the end of the season.

Contrary to what many (including myself) were inclined to believe, Jordan Reed has not stepped into a full-time starting TE role with George Kittle on IR. Since Kittle went down in Week 8, Reed hasn’t eclipsed 6 targets or a 51% snap share in any individual game. With a lower target share than Kendrick Bourne in that time frame, Reed’s ceiling is pretty low as the 49ers’ #4 receiving option. While Deebo Samuel’s injury could open the door for Reed, it’s much more likely to boost the fantasy profiles of Richie James and Kendrick Bourne. Heavily focused on running the ball, Reed’s dismal 48.7 PFF run-blocking grade is what’s keeping him off the field, and given how much he’s struggled with run-blocking in his career, it’s difficult to see a substantial increase in playing time for Reed anytime soon.

Fresh off his best game of the season, Sanders is sure to be a polarizing play in Week 15. Jalen Hurts has clearly added a new element to this PHI offense with his rushing, and Sanders is likely to benefit. Even so, Sanders has concerningly trended towards a 60% snap share in the previous three weeks and snaps are the most predictive stat for RB fantasy points. In his young career, Sanders has also historically struggled when the Eagles are underdogs, averaging just 13.9 DraftKings points when the Eagles are 4-point+ underdogs. At his most expensive price point of 2020, this seems like an ideal week to fade Miles Sanders.

Carson out-snapped Carlos Hyde 33-32 and was out-carried by Hyde 15-12 in Seattle’s blowout victory of the New York Jets. The Seahawks’ runaway victory presented Carlos Hyde with an opportunity for more reps. Still, even so, Carson hasn’t seen his usual volume since returning from injury in Week 12, despite averaging a robust 5.5 YPC in that time span. Ahead of a matchup against Washington, a team that ranks in the top ten in rush yards allowed and PFF run-defense grades, Carson’s 45-60% snap share and 10-15 touches likely won’t be enough for a tournament-winning performance. 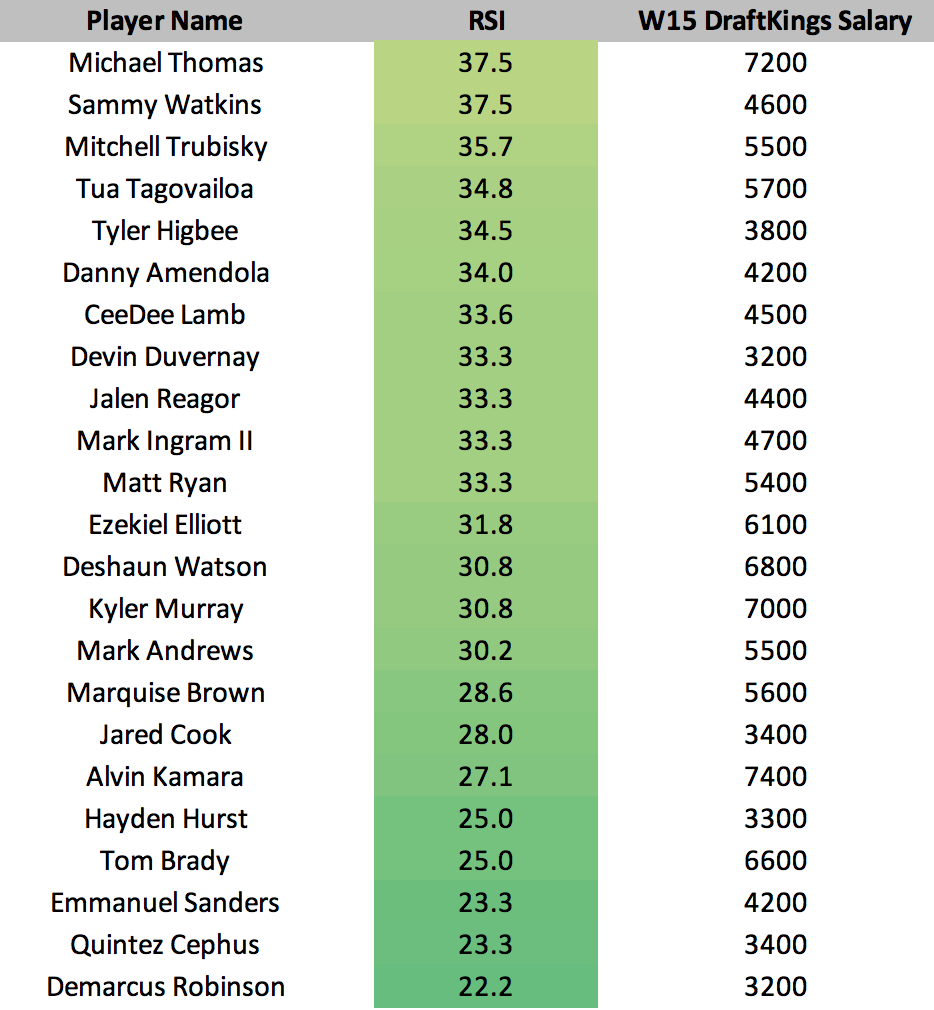 For hopefully the final time, I’ll write about why the Saints are all awesome plays if, and only if, Drew Brees manages to suit up in Week 15. With Michael Thomas, Alvin Kamara, Emmanuel Sanders, and Jared Cook all at unusually low price points, they offer an elite combination of projection-based value and upside in a Drew Brees offense.

Alvin Kamara will see the biggest benefit from Bree’s return, as his target share has fallen over 12% with Taysom under center. When combined with a further 7% dip in the Saints’ overall pass rate, it’s easy to see how these players’ fantasy value rides heavily on a healthy Drew Brees. Ahead of what will surely be a pass-happy game against the Chiefs, DFS players should get ready for Saints’ chalk if Brees is back in time.

With Saints vs Chiefs sure to be the game fantasy players focus on in Week 15, a player like Robinson is bound to go under-owned despite a high-scoring environment. Even with their full complement of weapons, Robinson has logged a 50%+ snap share in each of the last two weeks. While he’s far from Mahomes favorite WR, a 10% target share in the league’s best offense is still valuable, especially when it’s in the week’s highest-total game. With Mahomes+Kelce/Hill as the most popular stack of Week 15, adding in Demarcus Robinson is a great way to make an otherwise chalky stack unique.

This is the cheapest Matt Ryan has been since Week 16 of 2015. Since Week 7, Ryan’s salary has fallen $1300, as he’s posted just one 20+ point DraftKings game in that time span. The common absence of star WR Julio Jones has further hindered Ryan, as he hasn’t scored more than 15 DraftKings points when Julio has been declared inactive. Julio suiting up in Week 15 would be a huge boost for the struggling Falcons’ offense, but even if he sits, Ryan’s salary is too low to pass up. At under 3% ownership with strong upside, Ryan makes for a stellar tournament play with the Falcons as 6-point underdogs to Tampa Bay. In his career, Ryan averages 20.3 DraftKings points as an underdog, offering great value on a $5400 salary. Barring one of the worst performances of his career, Ryan won’t be this cheap again in 2020.

Reagor’s price tag hasn’t yet caught up to his upside as a near every-down player in what is shaping up to be a revitalized Eagles offense. With the team’s highest average depth of target (ADoT) and a 15% target share since Week 9, it’s only a matter of time before Reagors’ deep routes and targets lead to a breakout performance. Fighting for their playoff lives as 6-point underdogs against the Cardinals in Week 15, Philly is likely going to be forced to throw, and no Eagles player offers more upside than Reagor.

Coming off his 2nd-worst DraftKings performance of the year against Chicago on Sunday, Watkins is primed for a bounceback against Indianapolis in one of the only games with an over/under high enough to rival Saints vs Chiefs. Had it not been for Houston’s abysmal front-office decisions, Watson would be near the top of the MVP conversation with how well he’s played in 2020. The 4th-year QB is averaging an incredible 24.7 DraftKings points per game and ranks 4th overall in PFF passing grade. With Brandin Cooks likely returning from injury in Week 15, it’s hard to imagine Watson struggling to find an open man for the second game in a row. Those in need of more convincing should just look at how Watson has performed in high-total games in his career, averaging an astonishing 29.4 DK points in games with a total higher than 51. A player of Watson’s caliber rarely has consecutive bad games, and I would advise that it’s unwise to anticipate that changing this week.