It’s week 8 in the NBA and the bargain bin is overflowing right now as the injuries start to pile up for every NBA team. I’ve put together a list of low to midrange salary players who could see solid minutes this week, which could allow you to cheaply plug some holes in your roster so you have enough salary to load up on superstars. 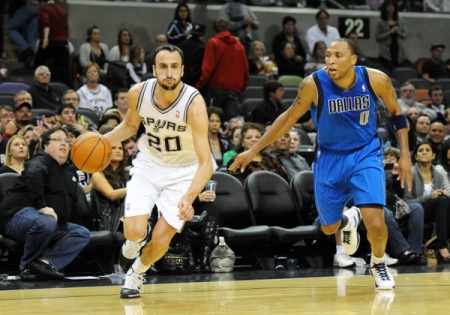 Chris Wilcox (BOS) – Jermaine O’Neal and Brandon Bass are both out this week and Wilcox should move into the starting center spot for the Celtics. He doesn’t score a lot, but he’s an excellent rebounder and can block a few shots as well.

CJ Watson (CHI) – Derrick Rose is really having some serious problems with his back and has missed the last couple of games. He’ll see a specialist Monday and it’s anyone’s guess how long he might be out. CJ Watson will take over the PG spot for the Bulls and he can put up some big fantasy lines from time to time. He’s a reasonable gamble with a fairly high ceiling.

Manu Ginobili (SAS) – Ginobili finally returned Saturday after missing extended time with a hand injury. He should jump right back into the mix and get his standard 30 minutes per game. He’s dropped in salary on a few sites, so check around to see what kind of deal you can get on him.

Randy Foye (LAC) – Chauncey Billups is out for the year and the Clippers have decided to plug Foye into the starting SG spot with Mo Williams coming off the bench as a backup to both Foye and Chris Paul. Foye should continue to see 30 minutes a game and has the ability to put up 20 fantasy points a night.

Ramon Sessions (CLE) – Kyrie Irving has missed the last couple of games with a concussion and Sessions has stepped into the starting PG spot and has performed pretty well. I’m not sure how long Irving is going to be out, but Sessions is a great daily option in the meantime.

Tristan Thompson (CLE) – Anderson Varejao is out indefinitely with a fractured wrist. Semih Erden might get the start at center, but I think Thompson gets the bulk of the minutes and is the better fantasy option. Keep an eye on the distribution of minutes and try to ride the hot hand at center for the Cavs.

Daniel Gibson (CLE) – Anthony Parker has been out with an injury and he could miss most of this week as well. Daniel Gibson has been getting solid minutes at SG and he has the ability to put up some nice lines when he’s hot.

Bismack Biyombo (CHA) – The Bobcats have decided to give Biyombo significant minutes to see exactly what he can do and that presents a real opportunity for fantasy owners to play him when the matchup is right. The biggest risk for owners is Biyombo’s habit of getting himself into foul trouble, but if he can keep the fouls at a minimum, he’s got a chance to put up solid lines.

Jason Maxiell (DET) – Maxiell had recently been getting the start at center for the Pistons and picked up two games in a row of 33 and 36 minutes. He’s backed off a little on the minutes, but is a decent play if he can start and stay on the court for 25-30 minutes a game. 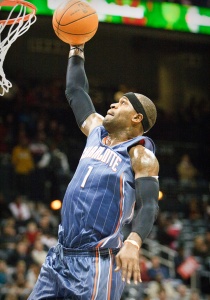 Stephen Jackson (MIL) – Jackson has been in Scott Skiles doghouse for quite awhile, but managed to work his way out in the last week. If he can work back up toward a steady 30 minutes a game, then he’s got great upside at a low salary.

Trevor Booker (WAS) – Andray Blatche should be out for another couple of weeks and Trevor Booker has been making the most of his opportunity for minutes. He had a great 13pt/15reb/4stl game Friday night, which shows pretty big upside at a decent price.

Rudy Fernandez Brewer(player-profile)”:/players/Corey_Brewer-1278 (DEN) – Danilo Galllinari is out for the next month with an ankle injury and it looks like Rudy Fernandez and Corey Brewer will split time at SF. Keep an eye on the timeshare and ride the hot hand, just as George Karl will.

Courtney Lee (HOU) – Kevin Martin is in a huge slump right now and it may be due to his continuing plantar fasciitis condition. Martin has only logged 13, 15 and 22 minutes in his last three games while Lee has played 26, 31 and 32 minutes in those three games.

Greivis Vazquez (NOR) – Jarrett Jack tried to return for a game with his knee injury, but it seems like he only made it worse and now he’s out for at least a week. Greivis Vazquez will start at PG for the Hornets and he has the ability to get you 20-25 fantasy points any night.

Gustavo Ayon (NOR) – The Hornets have been without Carl Landry and Jason Smith recently and Ayon has gotten 27, 18 and 32 minutes in his last three games. He’s not going to get you more than 15-20 fantasy points on any given night, but he’s really cheap if you want to basically punt a position and load up elsewhere.

Jamal Crawford (POR) – The Blazers could be in store for some lineup changes and Crawford could possibly end up taking over the starting PG spot, or at least getting some serious run at the position. He’s a great shooter, but also a pretty decent playmaker when given the chance.

Tiago Splitter (SAS) – The Spurs are in the middle of a nine game roadtrip and Tim Duncan will need some rest soon. If you see Duncan getting a random game off, jump on Splitter as a daily play.

Gordon Hayward (UTA) – The small forward spot had been a timeshare for the Jazz between Gordon Hayward and Josh Howard, but it looks like Hayward has token sole possession of the position and has been getting 30+ minutes a game over the last seven games. He’s also managed to put up double digit scoring numbers in seven of his last eight games.

Nic Batum (POR) – If the Blazers do decide to make some rotation changes, Batum’s minutes should go up rather than down. Marcus Camby is also dealing with a new nagging injury and if he misses time and Portland has to move LaMarcus Aldridge over to center, then Batum definitely becomes a better play.

Markieff Morris Frye(player-profile)”:/players/Channing_Frye-1484 (PHO) – Frye has really been heating up lately and makes a great daily fantasy play, although Morris hasn’t been performing too badly himself. Keep an eye on these two guys and try to play the hot streak with either player.

Daequan Cook (OKC) – Thabo Sefolosha has missed the last eight games and Daequan Cook has taken his spot in the starting lineup. Cook got 25-30 minutes of run in those eight games, while putting up some decent stats at a very cheap salary.

Mo Williams (LAC) – The injury to Chauncey Billups has shifted some extra minutes to Mo Williams. He should continue to average between 25-30 minutes a night and can usually put up 20+ fantasy points.

Jordan Hill (HOU) – Samuel Dalembert has been slumping badly in the last couple of weeks and Houston could move Hill into the starting lineup soon. Keep an eye on him and if he starts to get a steady 25+ minutes a night, he becomes a solid daily play.

Chase Budinger (HOU) – Chandler Parsons may be starting, but Budinger is the fantasy player you want to own in this timeshare. If Budinger keeps producing, and Kevin Martin gets shutdown, he could move back into the starting lineup with a steady 30 minutes a game, which makes a pretty good daily play.

Ronnie Brewer (CHI) – Rip Hamilton is out for at least another week and Derrick Rose could be as well, which means that Brewer is going to have to play some big minutes and will have to up his offensive game to compensate for the loss of Rose. He’s not spectacular, but he is fairly dependable for 20 fantasy points most nights.