Eduardo Rodriguez vs Frankie Montas (+.5): Total Strikeouts: If we are just looking at the numbers between these two pitchers since the beginning of last year, the obvious pick here is Rodriguez, but if we look at the changes that Montas has made, things become just a little bit tougher. ERod has a 26% K rate since the beginning of last year and faces a team whose projected lineup strikes out at a 21.8% clip vs. LHP, while Montas owns a 17.2% K rate vs a lineup that strikes out at a 20.6% clip since the beginning of last year. Montas has made some changes, adding in a splitter, and has increased his K rate to 21.8%, but he has the much harder matchup and is going against a high implied team total and can get hit around pretty quickly. All this to say, I think you go with Rodriguez, even giving up the tiebreaker.

Khris Davis vs Stephen Piscotty (+.5): Total Bases: I normally don’t like taking the batter who is giving up the tiebreaker, but with this prop, I’ll make an exception. Khris Davis is a much better hitter, owning a .317 ISO and .373 wOBA since the beginning of last year compared to Piscotty, who owns a .228 ISO and .355 wOBA. To me, the much better play here is to go with Davis and just move on.

Mookie Betts (+.5) vs J.D. Martinez: Total Runs/RBIs: This is the easy one. Runs/RBIs is a very volatile category and you are getting the better hitter and the tiebreaker. Since the beginning of last year, Betts owns a .262 ISO and .426 wOBA vs RHP, while Martinez owns a .268 ISO and .423 wOBA. Everything points toward Betts being the better play, and you are getting the tiebreaker. Take Betts and don’t think twice. 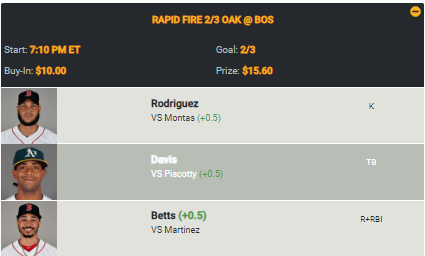 Josh Donaldson (+.5) vs Manny Machado: Total Runs/RBIs: To me, Machado is the better hitter, but this is a very volatile category, so the obvious person to go with is Donaldson. Looking at the matchup, ATL has a much higher implied team total of 5.04 compared to 3.96, and Soroka is the better pitcher than Margevicius. In the small sample size we have on Margevicius, he appears to be a reverse splits pitcher, but looking at his pitches, this likely a sample size error. Soroka looks to be an above average MLB pitcher and Margevicius is a below average one at this point, and Donaldson has the platoon split here. Donaldson is the obvious play.

Freddie Freeman (+.5) vs Ozzie Albies: Total Bases: Looking at the numbers, we have Albies going up against a lefty, who he has much better numbers against, and we are stuck with Freeman, who is in a lefty-lefty matchup. Even if we do disregard Margevicius’ reverse splits numbers (which we should as stated earlier), Freeman still owns the better numbers. Since the beginning of last year, he owns a .245 ISO and .413 wOBA vs LHP compared to Albies’ .218 ISO and .389 wOBA. Freeman has better numbers, more power, and is getting the tiebreaker. He is the correct play.

Justin Verlander vs Jake Odorizzi (+2.5): Total Strikeouts: Verlander’s numbers have taken a small hit this year, but he is still the obvious choice. He owns a 33.5 % K rate since the beginning of last year and is going up against a team that strikes out at a 21.6% clip vs RHP, while Odorizzi owns a 23% K rate and is going up against a low strikeout team in the Astros, who strike out at a 17.4% clip. While this would normally be enough for me to give up the 2.5 strikeouts, Odorizzi has a decent shot at getting beat up in this matchup and getting yanked early, while Verlander has a great ability to go late into games and has a much longer leash. Take Verlander.

Jose Altuve (+.5) vs Alex Bregman: Total Bases: This prop right here is completely about the tiebreaker for me. Looking at these two hitters’ numbers, Bregman is the slightly better hitter, but in my mind, it’s pretty much a toss-up. Neither hitter gets the platoon split, and neither hitter has drastic splits. You just roll with the guy getting the tiebreaker here and move on.

Carlos Correa (+.5) vs George Springer: Total Runs/RBIs: As you’ve heard me say multiple times, runs/RBIs is a very volatile category, meaning you almost always want to take the guy getting the tiebreaker; the most likely outcome is neither hitter gets one. Looking at the numbers, Springer has been slightly better, but Correa has a better chance of actually getting a run/RBI. Correa has three guys in front of him who get on base often and has two hitters behind him who can hit him in, while Springer is batting at the top of the order and has to hope that Stassi gets on base for him to get an RBI. 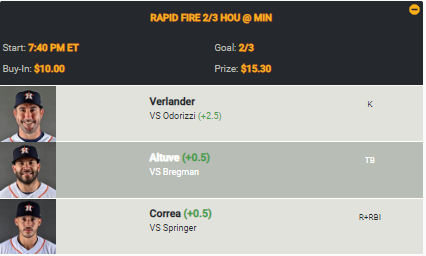