Coming off a promising 245-yard, three-touchdown performance on the road against a Steelers pass defense ranked seventh in Football Outsiders’ DVOA, Hundley will face a Buccaneers pass defense ranked 30th in DVOA. The struggles that come with being the league’s third-worst pass defense have been even more apparent on the road, where Tampa Bay has allowed an average of 310.8 yards and 2.0 touchdowns per game passing—far worse than the 261.6 yards and 1.2 touchdowns they allow at home.

If Hundley is having success against a Bucs defense that has allowed the seventh-most schedule-adjusted fantasy points to quarterbacks, there’s a good chance Davante Adams is doing so as well against Tampa’s last-ranked unit in schedule-adjusted fantasy points allowed to wide receivers. Adams has been the target on 28.7% of Hundley’s passes this season while no other receiver on the team has been targeted by Hundley more than 19.2% of the time (Jordy Nelson). Adams’ 52 targets from Hundley have produced 8.0 yards per attempt—much better than the 5.9 yards per attempt Hundley averages on his other 130 attempts this season. Adams has five or more catches in each of Hundley’s four post-bye starts, topping 80 yards three times and scoring twice.

If the Hundley-to-Adams connection forces the Buccaneers, who are the underdog as of this writing after opening as the favorite, to keep their foot on the gas on offense, they will most likely do so via the pass—Green Bay’s defense is seventh in run DVOA but 22nd in pass DVOA—and that will most likely involve Evans, the league’s seventh-most heavily targeted receiver at 9.6 per game. Packers cornerbacks have struggled all season—none ranks higher than 83rd of 118 qualifiers in Pro Football Focus’ coverage grades—and the team may be without rookie Kevin King (shoulder), who at 6-foot-3, 200 pounds is the most ideal player they have to match up to the 6-foot-5, 231-pound Evans. Only Evans’ own Buccaneers have allowed more schedule-adjusted fantasy points to wide receivers this season than the Packers. 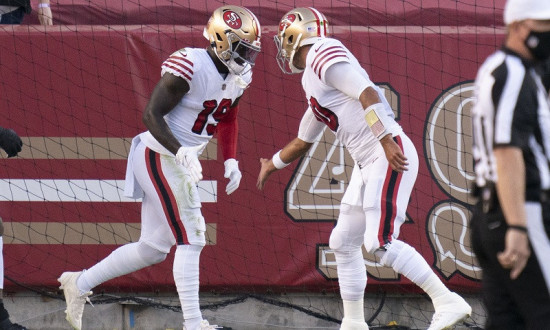 We don’t know much about Garoppolo as an NFL quarterback, but what we do know is that he’s done nothing but succeed in his limited action to this point, posting a 67.7% completion rate, 7.4 yards per attempt, a 6:0 touchdown-to-interception ratio, and a 110.1 passer rating on 95 career attempts. In tournaments, that uncertainty and promise can be leveraged cheaply, not only with Garoppolo, but also with his de-facto No. 1 receiver, Marquise Goodwin, who has accounted for 33% of the team’s air yards since Pierre Garcon went down in Week 7, per airyards.com. Vic Fangio’s pass defense has sprung leaks as of late, allowing the second-highest success rate since Week 8 (49%), per sharpfootballstats.com, while permitting a 71.5% completion rate, 8.6 yards per attempt, and a 6:0 touchdown-to-interception ratio over that span.

Epitomizing opposing passing game correlations, Inman’s production is likely to hinge on whether Garoppolo can build a lead for San Francisco because Inman needs the normally run-heavy Bears to be coaxed into passing for his 35% share of the team’s air yards during his three-game tenure to truly pay off in fantasy. When Chicago does take to the air, Inman should be able to win against a San Francisco defense that is ranked 29th in pass defense DVOA and 27th in DVOA versus No. 1 wide receivers—a role Inman has immediately stepped into since his acquisition in Week 10 with 5 more targets (17), 109 more yards (195), and 159 more air yards (300) than any other player on the team during that three-game stretch.

That Gurley is able to pace all players in probability of hitting cash game value despite a matchup with an Arizona run defense ranked fourth by DVOA, sixth by yards per carry allowed (3.70), and 10th by yards per game allowed (100.4) is a testament to the importance of volume and of a having reliable receiving floor as a running back. Among running backs that will take the field in Week 13, Gurley is second in snap rate (80%) and third in touches per game (22.4) while also owning the second-most receiving yards (479) and sixth-most targets (59).

Those receiving numbers figure to be especially relevant this week because Arizona is tied for the fourth-most receptions allowed to running backs this season (68)—including 9.3 per game over the past five weeks, tied for most in the NFL. Allowing excessive receiving production is a big reason Arizona, despite playing strong defense, hasn’t been a prohibitive matchup against running backs—the team ranks a middling 13th in schedule-adjusted fantasy points allowed to the position. It’s also worth noting Gurley didn’t have trouble running on Arizona when these teams met in London in Week 7, piling up 106 yards and a touchdown on 22 carries (4.8 yards per carry).

Oakland Recommitting to the Run Game 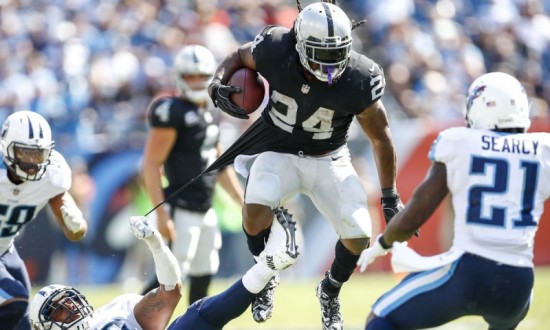 After Oakland offensive coordinator Todd Downing stated that he was hoping to feed [Lynch] a little more prior to last week’s tilt against the reeling Broncos, Lynch logged a season-high in snap rate (69%), carries (26) and targets (3) en route to 111 total yards and a touchdown in Oakland’s 21–14 victory. Prior to that, Lynch had been averaging 10.8 carries and 1.4 targets on 39% of the snaps (11.9 carries and 1.6 targets on 45% of the snaps if you remove his ejection in Week 7 when he played 10 snaps and carried twice). This week he’s a home favorite, which, as we know, is the ideal spot for a running back, against the Giants, who rank 25th in run defense DVOA and have allowed the sixth-most schedule-adjusted fantasy points to running backs.

Especially without starting wideouts Amari Cooper (concussion/ankle) and Michael Crabtree (suspension), who have combined to account for 24% of the team’s offensive plays and 27% of its total yardage, Oakland is likely to feed the beast once again this weekend.

While Adam Thielen has been getting his every week, posting five catches in every game and 89 or more yards in 7-of-11 games, Stefon Diggs has mostly taken a back seat after opening the season with two multi-touchdown games in the first three weeks. That could change this week. Barring a surprise, Trufant will miss Sunday’s game against Minnesota with a concussion. Among Atlanta’s top three corners (Robert Alford and Brian Poole being the others), Trufant is allowing the fewest targets (48) and lowest passer rating (85.0), per Pro Football Focus, while earning the site’s 10th-highest coverage grade among 118 qualifiers.

That bodes well for Diggs, who despite taking a backseat to Thielen still ranks 13th in FanDuel points per game (12.3) and 17th in DraftKings points per game (14.8) among wide receivers. It could bode equally well for Digg’s DFS owners, as RotoGrinders’ ownership projections (available to Premium users) have nearly two-dozen wide receivers projected for more ownership than Diggs.