Recency bias stemming from Gurley’s four-touchdown dismantling of the Seahawks last week—not to mention the resulting fear of missing out from those who didn’t roster him—has created tunnel vision among many in the DFS community, with much of the focus being on Gurley while Goff goes mostly overlooked. On RotoGrinders’ DraftKings ownership projections, for instance, Gurley is projected to be in one of every five lineups. Goff? One of every 20.

The Titans are a below-average defense, ranking 21st in Football Outsiders’ defensive DVOA, but where they struggle most is in pass defense. Tennessee ranks a solid 10th in run defense DVOA, but has managed a ranking of just 24th against the pass. What’s more, the team just put starting cornerback LeShaun Sims on injured reserve. Another starting cornerback, Logan Ryan, is battling an ankle injury.

The Rams’ implied team total (which is positively correlated with quarterback production) as of this writing is hovering around 26–27 points, which is strong, especially for a team playing on the road. And that may be underselling LA’s upside: the Rams have put up over 40 points on the road three times already and scored at least 35 points in two more. And though Gurley leads the league with 17 touchdowns, Goff has no trouble getting in on the scoring as well: Goff accounts for 62.5% of the team’s offensive touchdowns and has thrown for multiple scores in 6-of-7 games since the bye. If the highest-scoring team in the league smashes in Tennessee, pairing its quarterback and running back could potentially gain you access to not one, not two, not three, but four, five, or even six touchdowns.

All that and I haven’t even gotten to how the Titans are allowing the second-most receiving yards per game in the league to running backs (53.1). Gurley, of course, is second in the league among running backs with 630 receiving yards. And Gurley has caught 16.7% of Goff’s touchdowns this season, which is excellent for a running back gives this stack some of the same flavor you would get from a more traditional quarterback-receiver pairing.

Stacking Wilson with Elliott might be somewhat unconventional from a roster construction standpoint, but it’s far from contrarian. In fact, if the game unfolds how much of the betting public sees it (Dallas is a 5-point favorite and the implied score is 26–21), it would be hard for this stack not to pay off.

Dallas averages 28.3 points per game with Zeke in the lineup this season, scoring at least 28 points in 6-of-8 games. In those six games, Zeke averages 138.5 yards from scrimmage and 1.3 total TDs. If Dallas is scoring, Zeke is scoring.

That’s where Wilson comes in. Seattle has allowed more than 18 points only five times this season, but in those five games, Wilson averages 345.4 combined passing and rushing yards and 3.0 total touchdowns per games—and that includes his 181-yard, one-touchdown hiccup last week. In the other four games, Wilson amassed at least 321 combined yards and three touchdowns in each game. One of those games occurred just two weeks ago against Jacksonville, which ranks first in defensive DVOA. The Cowboys rank 23rd.

Note: Since I already touched on Todd Gurley above, I’ll discuss Cam Newton instead, who comes in second in cash odds on both sites. 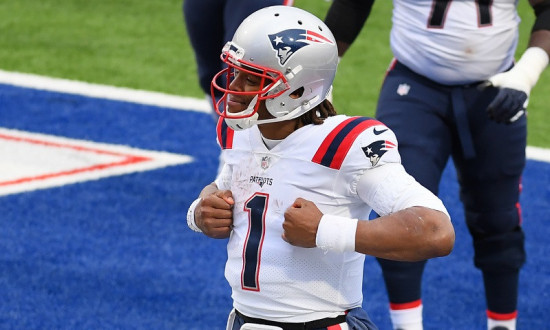 After rushing only 14 times in the first three games while the Panthers managed only 15.0 points per game despite a 2–1 start, the team seemingly scrapped that experiment and Newton has been running 9.9 times per game since while the team averages 26.0 points per game. That volume helps raise his floor—he has at least 4.4 rushing points in 10 of his last 11 games.

Also raising Newton’s floor is a matchup against a Buccaneers defense which ranks 31st in overall DVOA while surrendering the league’s most passing yards per game (275.0) and seventh-most rushing yards per game to quarterbacks (16.9). Tampa Bay’s injury-ravaged, underachieving defense has been particularly dismal on the road this season, allowing 30.3 points per game (compared to 17.7 at home), which ranks last in the NFL.

That most important difference between Reid and Nagy, though, is each uses Hunt when the Chiefs get in scoring range. Under Reid, Hunt handled only nine of the team’s 24 combined rushes and targets inside the opponent’s 10-yard line. Under Nagy, that jumps to 6-of-8.

Hunt’s elevated usage in scoring position gives him a great shot at producing his fourth multi-touchdown game of the season this week against a Dolphins defense which has allowed multiple touchdowns to opposing running backs in four of its last six outings.

If Hunt’s recent uptick in targets under Nagy holds, he has a major opportunity to do damage as a receiver: Miami has allowed 85.3 receiving yards per game to running backs over the last three weeks. All told, Miami ranks 29th in schedule-adjusted fantasy points allowed to running backs.

The ankle injury for DeSean Jackson

Back in August, I forewarned of a decline in targets for Mike Evans, who is down to 8.8 per game this season after averaging 10.8 last season. But with Jackson and rookie tight end O.J. Howard (ankle, IR) out, this offense essentially reverts back to last year’s version in terms of who is available for Jameis Winston to throw to.

The potential for Evans to be force-fed targets is enhanced by a Carolina defense which over the past four weeks has allowed a borderline-unbelievable 63 catches for 818 yards and seven touchdowns to wide receivers. The Panthers have allowed at least five catches and a touchdown to the opponent’s No. 1 wide receiver for five games and counting. Starting cornerbacks James Bradberry and Daryl Worley both rank outside the top 85 qualifiers in Pro Football Focus’s coverage grades, and the team ranks just 26th in schedule-adjusted fantasy points allowed to wide receivers.