Welcome back to Raybon’s Rollout, where I highlight the unconventional stacks and players I’ll be rolling out in DFS each week. The column is largely based on my intensive research on stacking and coaching tendencies, and this year I’m adding a section which features the player with the top projected percentage odds of the week to hit cash game value, which follows the same methodology I use to calculate projected odds of hitting tournament value in my GPP Leverage Score metric.

The Colts passing game has been underwhelming this season, but it has also been predictable. In his only three games against opponents which rank 27th or lower in schedule-adjusted fantasy points allowed (aFPA) to quarterbacks, Brissett had his three best fantasy games of the year: 273 total (passing and rushing) yards and three touchdowns against the 27th-ranked Browns in Week 3, 328 total yards and one touchdown against the 30th-ranked 49ers in Week 5, and 320 total yards and two touchdowns against this week’s opponent, the last-ranked Texans, in Week 9. Brissett failed to eclipse 239 total yards in any of his other 11 starts. 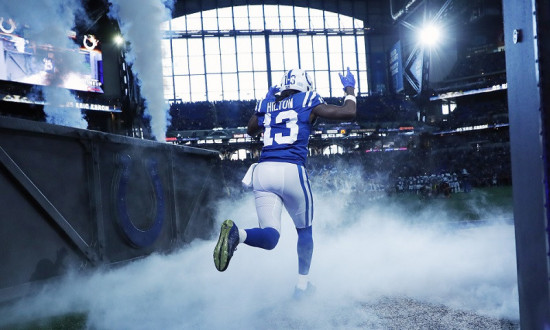 Save for last week’s six-catch, 100-yard outing against Baltimore, Hilton’s production has only spiked in Brissett’s three aforementioned big games (or more realistically, the talented Hilton was the main cause behind Brissett’s spiked production). Hilton topped 150 yards in each of those games, with stat lines of 7–153–1 against the Browns, 7–177–0 against the 49ers, and 5–175–1 against these very Texans. Houston not only ranks dead last in quarterback aFPA, but wide receiver aFPA as well.

Fuller will serve as Houston’s top wideout with DeAndre Hopkins (calf) calling it a season, and if the Brissett-Hilton connection continues to smash subpar pass defenses, the resulting game script could easily mean double-digit targets for Fuller against a pass defense that is ranked second-worst in the league according to Football Outsiders’ DVOA. In the nine games in which both Hopkins and Fuller were active, they combined for 72% of Houston’s air yards, per airyards.com. T.J. Yates at quarterback is far from ideal, but Fuller still represents a “talent meets opportunity” situation. Remember, Fuller is a first-round pick with 4.3 speed who topped 100 yards in each of his first two career games while catching passes from Brock Osweiler.

After leading the 49ers offense to five touchdowns last week against a Jaguars defense that had allowed only 20 offensive touchdowns in its first 14 games, Garoppolo gets to put an exclamation point on his impressive season with a matchup against an unmotivated Rams defense that will rest the monster that is Aaron Donald and likely limit other key players as well. Garoppolo is completing 69.0% of his passes this season and has not been under 7.9 yards per attempt in any of his four starts as a 49er.

Since Garoppolo took over, Goodwin tied for fifth in the league with 39 targets and is also fifth in air yards, with 518, good for a 27% share of the team’s targets and 40% of their air yards. Even with their starters in last week, the Rams showed vulnerability to Tennessee’s normally docile crew of wideouts, allowing a combined 14 receptions for 212 yards to Corey Davis, Eric Decker, and Rishard Matthews.

Reynolds, a 6-foot-3, fourth-round rookie out of Texans A&M who filled in for Robert Woods during Woods’ absence earlier in the year, would be the highest-upside Rams pass-catcher should Garoppolo put LA in a hole. Pharoh Cooper is in the mix as well, but Cooper is expected to serve as the slot receiver while Reynolds lines up outside, which is where San Francisco has struggled the most in pass coverage: According to DVOA, the 49ers rank 31st on passes to the offense’s left and 32nd on passes to the right, but third on passes to the middle. It’s also worth noting Reynolds and fellow second-teamer Sean Mannion already have a rapport: Reynolds caught both of Mannion’s touchdown passes this preseason, from 20 and 38 yards out.

Gronkowski has been a high-floor, high-ceiling investment on DraftKings all season long, with six 20-point games and only three games under 10 points in his 13 games played. The last two times the Patriots failed to reach the Super Bowl, they had to go on the road for the AFC Championship game, which perhaps explains why on a day when even teams that could improve their playoff seeding have opted to rest players instead, New England’s implied team total is holding steady at around 29 points. Gronk may not even need an entire game’s worth of work to hit value, though—he leads all tight ends in receiving yards (1,083) despite missing two games and scored a touchdown in each half when these teams met back in Week 6. 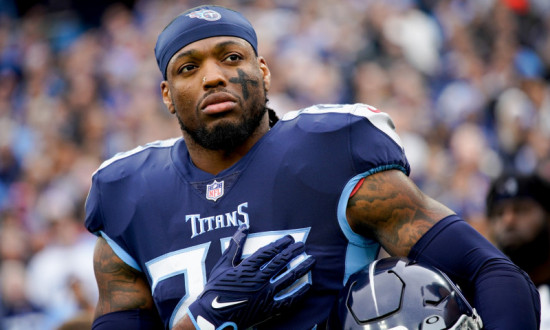 Henry is slated to carry the load for a Titans offense that averages 25.8 running back touches per game as the team faces the Jaguars in a game that’s a must-win for the Titans and meaningless for the Jags. Despite widely circulated narratives to the contrary, defensive tackle Marcell Dareus hasn’t exactly fortified Jacksonville’s run defense, grading as only the 79th-best run defender in Pro Football Focus’ interior lineman grades. The Jaguars rank 29th in run defense DVOA and 25th in schedule-adjusted fantasy points allowed to running backs.

The growing role of Alvin Kamara in the Saints offense

A week or two ago, I caught wind of a commentator on the Saints broadcast talking about how the offense had to completely recalibrate when Kamara left the Week 14 game with a concussion after just six snaps because the entire offense had been basically reconfigured to revolve around Kamara.

The numbers back that up.

From Week 6 (the first game without Adrian Peterson) to Week 13, Kamara was out-touched by Mark ingram, 20.6 to 13.9 per game. But over these last two weeks, the pendulum has swung toward Kamara with an 18.5–16.5 advantage.

Kamara’s growing role is even more evident when you look at touches on a per-snap basis. During Weeks 6–13, Kamara got a touch on 41.6% of the snaps. The last two weeks? 53.6%. And if you take into account Kamara’s four touches on six snaps in the game he got hurt, that figure rises further, to 54.7%, over the past three weeks.

Ingram, meanwhile, has seen his touch-per-snap rate fall from 57.7% in Weeks 6–13 to 45.2% over the last two weeks. Both Kamara and Ingram have No. 1 overall RB upside against a Buccaneers defense that’s ranked 21st in running back aFPA, but after Kamara’s elite production defied his modest usage for most of the season, he’s finally approaching the touch count of a true feature back.

The knee injury to Aaron Jones

With Jones succumbing to a knee injury once more, the 2017 regular season will close out with one final episode of the Jamaal Williams show. Don’t let two subpar performances from Williams over the past two weeks—against two run defenses ranked in the top six in DVOA, mind you—obscure that he averaged 22.6 touches, 109 total yards, and 1.0 TDs per game in the five games prior.

Williams logged over 90% of the snaps last week, and though he amassed only 58 scoreless yards on 15 carries while failing to catch any of his three targets against the Vikings, similar usage could produce a much better result this week against the Lions, who rank 30th in running back aFPA and 28th in run defense DVOA.

In games without run-stuffer Haloti Ngata, the Lions have allowed 4.52 yards per carry and 12 rushing touchdowns to opposing running backs. During that span, backs collectively average 159.8 total yards and 1.3 touchdowns per game against Detroit.

As JMToWin points out in the DraftKings expert survey (available to Premium users), you could even make a strong argument Williams is in a better spot than Derrick Henry this week (road underdog status notwithstanding).