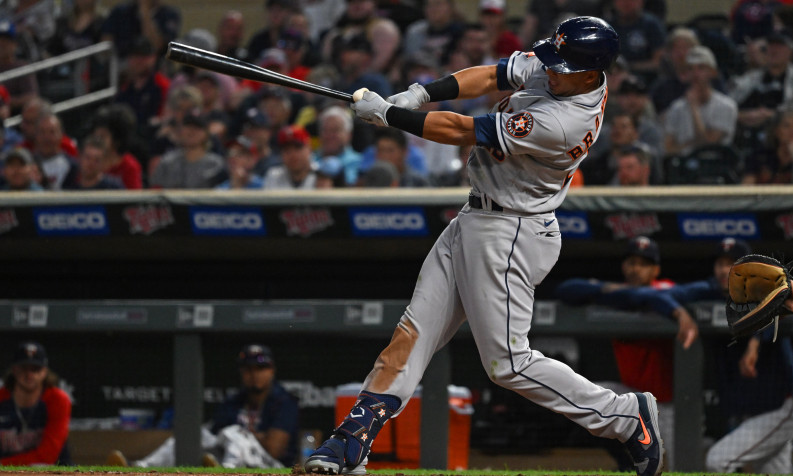 MLB betting analyst Nick Galaida is a perfect 5-0 wagering on the ALCS! Follow along as he breaks down Red Sox vs. Astros odds, previews matchups for Games 6, and delivers his own prediction (and free pick!) on Friday, October 22, 2021.

On Friday evening, the Boston Red Sox and the Houston Astros will battle in the American League Championship Series at Minute Maid Park. Houston scored four runs off of Boston’s bullpen in Game 1 to secure a come-from-behind win. In Game 2, the Red Sox hit two grand slams in an easy victory to tie up the series. In Game 3, Boston’s bats erupted for 12 runs in a dominating victory. In Game 4, Houston once again got to the Boston bullpen in the late innings to even up the series. In Game 5, the Astros offense plated nine runs in a winning effort. Tonight, Nathan Eovaldi will get the ball for the Red Sox with their season on the line. The Astros will counter with Luis Garcia. Oddsmakers are anticipating the Astros booking their ticket to the World Series, pricing Houston as -116 home favorites.

Let’s take a deeper look at the matchup to see where bettors can find value at sportsbooks for Game 6 of the ALCS.

Eovaldi was outstanding for the Red Sox during the regular season with a 3.75 ERA, 3.37 xERA, and a 2.79 FIP across 182.1 innings of work. Though Eovaldi was at his best when pitching at Fenway Park, he was still strong away from home where he delivered a 3.39 FIP in 2021. In three postseason starts this October, he has been solid, allowing only two six earned runs in 15.2 innings. Manager Alex Cora made an interesting decision to use Eovaldi out of the bullpen in Game 4—an appearance in which Eovaldi surrendered four earned runs in only two-thirds of an inning. Bettors should not hold that relief outing against him. Instead, expect Eovaldi to be sharp in Game 6, and for him to give Boston an opportunity to extend their season to fight another day.

Against right-handed pitching in 2021, Boston ranked second in OPS, second in ISO, 19th in walk rate, and 17th in strikeout percentage. Prior to Game 4, Boston’s offense had averaged 8.5 runs over their previous six postseason games. However, this lineup has fallen flat in their last two contests, totaling only three runs combined in Game 5 and 6. The Red Sox have plenty of talent at the plate. They should have a much better performance at the plate tonight than they have each of the last two times they have taken the field.

It was less than ideal for Manager Alex Cora to burn through seven relief pitchers in a Game 1 loss, but none of those seven arms threw more than 18 pitches. In Game 2. Eovaldi gave Boston some much-needed length, lasting 5.1 innings. Rodriguez delivered six strong innings in Game 3, leaving only three innings for the bullpen to cover. Yesterday, Pivetta was strong across five innings, but Cora’s lack of faith in his late inning arms prompted him to use Eovaldi in relief, who ended up blowing the game in the ninth inning. On Thursday, this unit gave up four runs in only 3.2 innings of work. The off-day yesterday will help from a fatigue perspective, but the backend of the bullpen still has serious talent reliability concerns.

Garcia had a 3.30 ERA, 3.98 xERA, and a 3.63 FIP for the Astros in 155.1 innings of work during the regular season. He was significantly better at Minute Maid Park than he was when pitching on the road. Pitching at home, Garcia posted a 2.97 FIP, 1.01 WHIP, 28.8 strikeout percentage, and a 6.1 percent walk rate. In his only start of the division series against the Chicago White Sox, Garcia was tagged for five earned runs in only 2.2 innings, but that outing was on the road. Pitching at home in Game 2 of the ALCS, Garcia was blasted for five earned runs in one inning of work against Boston. Bettors have little reason to trust Garcia against a dangerous, desperate Boston lineup in Game 6.

Against right-handed pitching in 2021, Houston ranked fourth in OPS, ninth in ISO, 11th in walk rate, and had the second-best strikeout percentage of any team in the league at the plate. The Astros have scored five or more runs in eight of their nine postseason games this October. Jose Altuve, Michael Brantely, Alex Bregman, Yordan Alvarez, Carlos Correa, Kyle Tucker, and Yuli Gurriel is arguably the deepest lineup in baseball. Expect disciplined at-bats to lead to a number of scoring opportunities for this group once again in Game 6 against Eovaldi, who they are seeing for the third time in this series.

Houston continues to have significant question marks in their bullpen. Manager Dusty Baker has two fantastic options at the backend of his bullpen with Kendall Graveman and Ryan Pressly, but Phil Maton, Yimi Garcia, Ryne Stanek, and Brooks Raley are far from elite options to bridge the gap from the starter to the latter frames—especially in situations similar to Game 2 when the starter lasts only a single inning. This unit performed admirably in the series opener—allowing only one earned run in 6.1 innings after Framber Valdez was chased from the contest in the third inning. This unit was spared from overuse in Game 2 thanks to four strong innings from Jake Odorizzi. In Game 4, this relief corps gave up six earned runs in 6.1 innings. To their credit, this unit has been strong each of the last two games, but overuse is a concern heading into Game 6.

As we have reiterated in each of these ALCS betting previews, these are two evenly matched teams with elite offenses and suspect pitching staffs. Since the beginning of the 2019 season, Minute Maid Park has been a slightly pitcher-friendly venue in night games. However, Houston will be seeing Eovaldi for the third time in this series. Garcia was tagged for five earned runs in one inning against this Boston lineup in Game 2. Both bullpens are vulnerable. Bettors should expect a high-scoring affair for the sixth game in a row. Take the over.