RotoGrinders Matchup of the Week: Week 10

Welcome to the RotoGrinders Matchup of the Week! Each week, this piece will pull out one matchup that stands out to us on the weekend’s slate.

Below, you will find JMToWin’s writeup of this game from his NFL Edge – the most in-depth, DFS-specific piece in the industry, in which every game is broken down from top to bottom in a DFS-specific manner – and you will also find assorted thoughts from some of the other, top minds in Daily Fantasy Sports.

To access this content in its entirety, take our Premium package out for a free, seven-day test drive!

The Fox executives are going to be wondering why they drew such high ratings for a game as ugly as 49ers at Cardinals. The answer, of course, will be: All the DFSers wanted to watch David Johnson eat up the worst run defense in the NFL.

We all know that San Francisco plays at the fastest pace in the NFL, and allows the second-most opponent plays per game in the NFL. What many will overlook is that Arizona – in spite of playing at a middling pace – actually ranks second in the NFL (behind only the Saints) in plays per game. Last week, this added up to the Saints running a ludicrous 82 plays in this same matchup, and while the Cardinals play at a slower pace than the Saints (and should therefore see their “total plays” bumped up a bit less than what the Saints saw), we should still see somewhere around 75 or 76 plays for the home team in this one.

On the season, the Cardinals have passed on 62% of their plays, which would put them in line for about 47 drop-backs for Carson Palmer – but the Cards have dialed back Palmer’s pass attempts in a couple of their blowout wins, which could leave us with something more along the lines of 37 to 40 passes if this game gets out of hand (as is expected). We’ll circle back around to what this means for the pass game, but first off, this means we should see a minimum of 28 rushing attempts for the Cardinals as a team, with upside for 40 total rush attempts. Last time the Cardinals played the 49ers (albeit with Drew Stanton under center), David Johnson received 27 carries and six targets, and it is worth noting that Johnson almost never leaves the field as long as the game is in question. Although this should turn into a blowout, the Cardinals are highly unlikely to remove their starters until partway through the fourth quarter, which gives DJ a ceiling of 30+ touches. While we were pretty comfortable last week with the idea of targeting either Tim Hightower or Mark Ingram in this matchup, as the two were expected to split work (and could both be safely projected for a solid game), we should expect the bulk of the work through the first three quarters to go to DJ, against a run defense allowing 193 yards per game (to put that in perspective: the worst run defense in the entire NFL last year was Chip Kelly’s Eagles…who allowed 134.6 yards per game; if the season ended today, the 49ers would be 20 yards per game worse than the worst run defense of the last 10 years – the 2006 Colts).

There is also a slim call to be made for playing Andre Ellington in tourneys. This play could wind up being something like a 4% or 5% owned play if the idea gains traction in fantasy circles – which would honestly make Ellington a bit overvalued, given that the Cardinals are highly unlikely to suddenly start splitting work early in the third quarter. But if you don’t see anyone talking about rostering Ellington, he makes for an interesting deep-tourney play, as the Cardinals will not give DJ 40 touches in a blowout, and if the Cardinals do reach that lofty rushing total, 10 or 12 of those looks could go to Ellington, making him a guy who could rack up anywhere from six to 16 points against this atrocious run D.

The passing game for the Cardinals is a bit less straightforward, as the 49ers have struggled most heavily on passes deep middle and deep right (according to Football Outsiders, the 49ers are above-average on all short passes, but they are the worst team in the NFL – by far – at defending deep middle and deep right). Last year, this would have played perfectly to the strengths of Carson Palmer, but he has struggled with deep shots this year. I will point out that Larry Fitzgerald – in spite of absolutely embarrassing the 49ers a few weeks back with 81 yards and two touchdowns – is priced like an elite downfield receiver when he has not topped 81 yards all season, and he has the toughest matchup on the Cardinals with Jimmie Ward now healthy in the slot. With the Cardinals coming off their bye, John Brown should be healthy, though the team may treat him more like a third wide receiver due to his health concerns with sickle-cell trait – perhaps holding him to about 35 to 45 snaps, as they did in Week 8. This makes J.J. Nelson (the newly-christened “number two receiver”) the guy likeliest to benefit, as he saw a full compliment of snaps each of his last two games and turned these snaps into 19 targets, 11 catches, 163 yards, and two touchdowns. No one on this team is going to rival the scoring looks of Larry Fitzgerald (eight targets inside the 10-yard-line – ranking third in the NFL) and David Johnson (first in the NFL in carries inside the 10 and inside the five), but J.J. does have two targets inside the 10-yard-line already in his limited action, giving him a bit of upside as well. 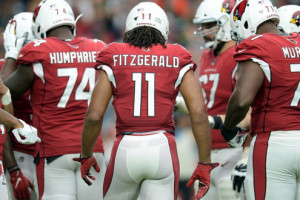 Ultimately, I see J.J. as a borderline cash play (with tons of tourney upside), while Fitz should be relevant more for his potential to spoil DJ and J.J. touchdowns than for anything else (he could always break a few tackles and top 100 yards – but the likeliest scenario for Fitz is a high-floor, low-ceiling line of something like 7-80-1). I also like Carson Palmer in tourneys, on the chance the Cardinals remain heavily aggressive into the fourth quarter (or on the chance the bye week did wonders for Palmer, and he is going to come out slinging like his old self – in which case, 300 yards and three touchdowns would not at all be out of the question, even in barely more than three quarters of work).

Did we spend a lot of time talking about the Cardinals? Yes – and why not, when they are projected to be the highest-scoring team on the weekend.

Do we need to spend an equal amount of time talking about the 49ers? Ha!

The 49ers have the lowest Vegas-implied team total on the main slate (and it’s not particularly close), making them an easy team to avoid. There is a bit of rushing upside for Colin Kaepernick in this one (and even a slim chance he keeps the game close early), as the Cardinals’ man coverage defense can leave a bit of room available for a running quarterback such as Kaep. But ultimately, with the 49ers ranking third in the NFL in giveaways and the Cardinals ranking fifth in the NFL in takeaways, and with Kaep having no real weapons to throw to, I expect something much closer to the sub-200-yard games he had through the air in his first two starts than something like the 398 passing yards he had against the generous Saints, and I expect the Cardinals’ defense to be a popular, but still-worthwhile play.

I can see a slight case to be made for DuJuan Harris, if Carlos Hyde misses this game, simply from a volume standpoint (maybe some garbage time fantasy scoring?), but the Cardinals do rank third in the NFL at covering backs out of the backfield (DVOA), and the overall yardage for the 49ers may be capped at around 300 yards (with a good 50 or 60 of those coming from Kaepernick on the ground). This doesn’t leave much for the running back – and if asking myself the question we should all be asking (“Would I want to roster Carlos Hyde in this matchup, at DuJuan’s price?”), my answer would still be no. (Obviously, this means that if Hyde gets cleared to start, I don’t want to roster him at his price, either!)

What Our Experts Are Saying (NFL Premium)

Below you will find a teaser from our Premium selections. We have a lot of content available for subscribers each week, including Consensus Value Rankings, in-depth slate writeups, cheat sheets, positional spotlights, and much more.