Aaron Nola (+.5) vs Noah Syndergaard: Total Strikeouts: Looking at the numbers here, we have two fairly similar strikeout pitcher. Syndergaard owned a 24% K rate last year, while Nola owned a 27% K rate. Where we are really getting the advantage here is with Nola owning the tiebreaker between the two and having the better matchup. The projected strikeout totals for these two teams are fairly similar, but this Philly team draws walks at a much higher rate and has a whole lot more power and better hitters. There is a decent chance that Thor gets beaten up pretty badly here and is yanked early, or this Philly team can work the count and get Noah’s pitch count too high for him to go deep. I side with Nola on this one by a decent amount.

Jean Segura (+.5) vs J.T. Realmuto: Total Bases: I am willing to concede that Realmuto is the better hitter, but it’s not by much and it isn’t terribly unlikely that either of these two batters end up with zero total bases. Noah is a good pitcher and limits extra base hits, so there is a pretty good shot that if either hitter gets a hit, it will probably only be a single. With the chances being roughly 25% neither get a hit, 25% both end up with the same total bases over zero, and 50% that one ends up with more than the other, I’m rolling with the guy who owns the tiebreaker.

Robinson Cano (+.5) vs Bryce Harper: Total Runs + RBIs: This one’s relatively easy to figure out just by looking at the run totals for both these teams. Both teams own under a 4 implied run total, so the likelihood that Harper ends up with no runs or RBIs is actually decent. I will concede that Harper is the much better hitter, but both have the platoon split, and this is a very volatile category. Cano wins this prop around 70% of the time, so go with Cano here. 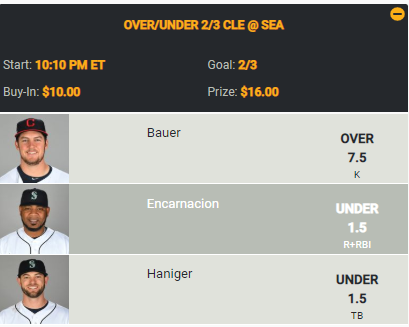 Wil Myers (+.5) vs Nolan Arenado: Total Bases: This one is pretty much a toss-up. Arenado is a much better hitter, but he has a much worse matchup. I know that Arenado is a pretty much a lock and load going up against a lefty, but Senzatela over on the other side is a much worse pitcher than Lucchesi, and it’s not remotely close. Last year Senzatela owned a 4.51 xFIP compared to Lucchesi with a 3.65 xFIP. Currently, the Padres own a 4.2 implied team total compared to the Rockies with 3.3. Everything points toward Myers being in the better situation and he’s getting the tiebreaker, so I’m rolling with Myers.

Manny Machado (+.5) vs Trevor Story: Total Runs + RBIs: This one is quite a bit easier than the first one. Machado is the better hitter than Story in my opinion (even though Story has the platoon split), has the better matchup, is on the team with the higher implied team total, and is the one getting the tiebreaker in a very volatile category. Everything points toward Machado here, so don’t overthink this. This is just a free square.

Mark Reynolds (+.5) vs Charlie Blackmon: Total Runs + RBIs: Another free square. While Blackmon is absolutely the better hitter, he draws a lefty vs. lefty matchup, and looking at both hitters vs. lefties last year, Reynolds actually has better numbers. You get the tiebreaker with Reynolds in a tough category, in a low implied team total team. Reynolds wins this 70% of the time. 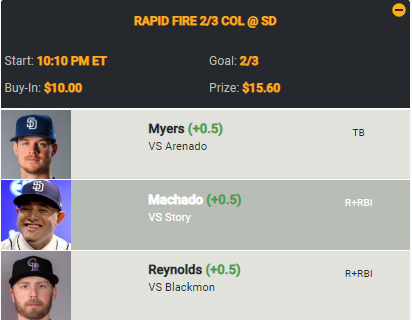 Trevor Bauer: Over 7.5 Strikeouts: Bauer currently has three starts under his belt this year and he has gone over 7.5 strikeouts two out of three of those starts. He draws a matchup against a Mariners team with a 21% K rate vs RHP and Bauer is a 31% K rate pitcher. Bauer has double-digit K potential every time he steps on the mound, and is more likely get eight every start. Don’t overthink this one.

Edwin Encarnacion: Under 1.5 Runs + RBIs: If this were a matchup vs. a bad pitcher, I’d actually have to think about this one, but since Encarnacion is going up against Bauer, there is a very low chance he hits the over. The Mariners’ implied team total for this game is set at 3.69, so the chances of Encarnacion getting two runs/RBIs pretty much rest on him getting a home run (which is unlikely). Take the likely free square here.

Mitch Haniger: Under 1.5 Total Bases: This one isn’t quite the free square as the last one was, but it’s still the most likely outcome. Bauer is just too good of a pitcher and Haniger is not a good enough better to make up for that. Any time you have a matchup against one of the best pitchers in the league, it is drastically more likely that you end up with less than two total bases. Take the Under and move on. 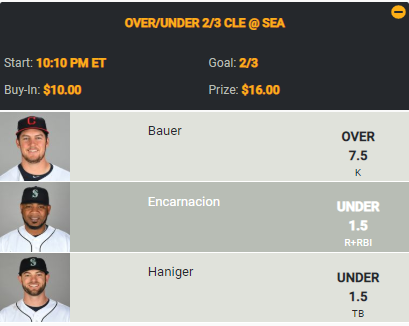