Rick Porcello: Under 5.5 Ks: Currently Vegas has Porcello set at 5.5 Ks, but the juice is really heavy on the under (currently set at -162). He draws a matchup against a KC team that isn’t great, but the Royals do strike out at a below average rate and Porcello is a below average strikeout pitcher here. Five-and-a-half is a very ambitious line and Vegas is in agreement here. Just take the under and move on.

Whit Merrifield: Under 1.5 Hits+Walks: Generally, whenever I see this line, I take the under. While Merrifield is a good hitter and this is an above average matchup, the majority of the time a hitter is not going to get on base more than once (not that it’s impossible, but its less likely to happen than not happen). Porcello is not a great pitcher, but he is better vs. righties than lefties, and he has a higher K rate and a very low walk rate vs. righties. I think Merrifield gets on base once this game, so back the under.

J.D. Martinez: Over 1.5 Total Bases: Unlike with Merrifield, Martinez has multiple outs with this prop. He has some otherworldly numbers vs RHP, owning higher than a .500 ISO & wOBA. This is a perfect spot for him and the Red Sox, who have over a 7 implied run total. Currently, Martinez is about 3-to-1 to hit a HR, and that doesn’t account for the fact that he is likely to hit a double about 70% of the time in this matchup. This prop is a lock you don’t need to overthink. 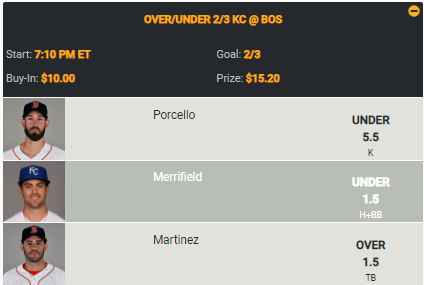 Charlie Morton vs Jacob Waguespack (+4.5): Total Fantasy Points: This one is an absolute lock and load here. Morton has a 2.87 implied run total against him compared to Waguespack, who has a 5.13 implied total against him. Morton has the ability to go later in the game and has a K rate about 10% higher than Waguespack. If this line were set at 9 points, I’d still take Morton.

Tommy Pham (+.5) vs Ji-Man Choi: Total Fantasy Points: When looking at batters for this prop, you try and find one where you have an advantage in every single way, and we have that here. Pham is the better hitter than Choi, is getting the tiebreaker, has less of a chance of getting pinch hit for, and although he doesn’t have the platoon split, Waguespack has been extreme reverse splits so far this season. Everything favors Pham here and he’s getting the tiebreaker.

Travis d’Arnaud (+.5) vs Vladimir Guerrero: Total Fantasy Points: This is another spot where we get the guy with everything in his favor. d’Arnaud gets the worse pitcher and the worse bullpen, and he’s getting the tiebreaker. I think it’s likely that Gurrero ends up with 0 fantasy points going up against an ace in Morton. Throw in d’Arnaud and don’t think twice. 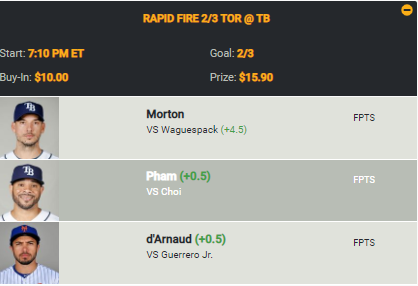 Looking at Vegas home run props, the three players are as follows:

Pederson and Bellinger have the two highest HR props on the board today, as they have tons of power and are going up against one of the worst pitchers in the league in Wacha. Goldschmidt, on the other hand, has one of the highest HR props on the board and has 5 HRs in his last 10 games. While I don’t like the odds on this prop, it’s pretty close to a lock that one of these guys hit a HR. Take the free money. 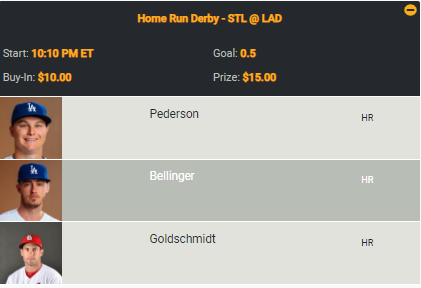