Mike Soroka vs Zack Wheeler (+1.5): Total Fantasy Points: This prop is probably one of the easiest ones of the day. Soroka has Wheeler beat in pretty much every single category today. Looking at Vegas lines, the Braves are a full run ahead of the Mets. Looking at xFIP, Soroka is better than Wheeler, and looking at matchup, the Mets are a much less intimidating matchup than the Braves. The one spot where Wheeler does have Soroka beat is in K rate, but over on MKF, Ks are worth the same as an out, making them close to worthless. Soroka runs away with the prop.

Freddie Freeman (+.5) vs Ronald Acuna: Total Fantasy Points: This is another prop where Freeman has Acuna beat in every single category. First, Freeman has the platoon split against a pitcher who is much worse vs. lefties than he is vs. righties. Second, Freeman has the much better numbers vs. RHP with a .287 ISO and .426 wOBA compared to Acuna who has a .184 ISO and .369 wOBA. Lastly, Freeman owns the tiebreaker, so if they end up with the same points, Freeman wins. Don’t overthink this, and just roll with Freeman.

Michael Conforto (+.5) vs Josh Donaldson: Total Fantasy Points: This one was the tough one. Conforto is probably a better hitter at this point in their careers and he owns the platoon split while Donaldson does not, but this is a much tougher matchup for Conforto than it is for Donaldson. What this prop really came down to was the fact that Conforto owns the tiebreaker. There’s a decent chance that either of these guys puts up a zero today, so I’m rolling with Conforto knowing that he wins the category in the case of a tie. 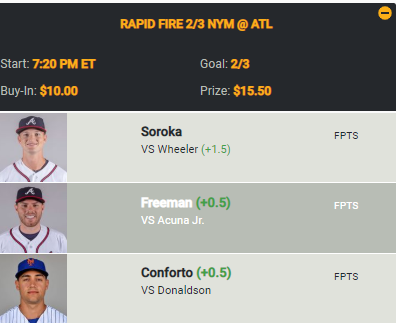 Jose Berrios vs Rick Porcello (+.5): Total K’s: This one’s the free square in this prop. Porcello is facing an opponent with a lower strike rate, he owns a K rate 4% lower than Berrios, he doesn’t go as late into games as Berrios does, and there is a decent chance that he ends up getting blown up in this game and is out before he makes it to the 4th inning. With all these things going against him, he is only getting the tiebreaker on this prop. There’s probably a 15-25% chance that Porcello wins this prop today, so I’m rolling with Berrios here.

Max Kepler (+.5) vs Nelson Cruz: Total Runs/RBIs: Looking at Cruz and Keplers numbers vs. RHP so far this season, Kepler has the slight edge as he owns a .295 ISO and .391 wOBA compared to a .246 ISO and .371 wOBA for Cruz. Looking at Porcello’s numbers vs. righties compared to lefties, he has been much worse vs. lefties, owning a much lower K rate, a much higher walk rate, while giving up similar hard contact and lower ground balls. This is a better matchup for Kepler, who has better numbers and the tiebreaker in a very volatile category. Just take Kepler and move on. 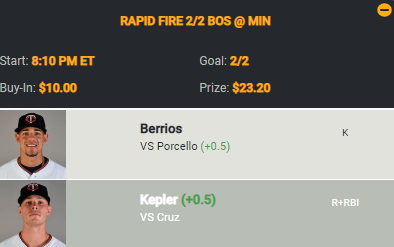 Mike Fiers vs Andrew Cashner (+1.5): Total Strikeouts: Looking strictly at Fiers and Cashner’s K numbers, the edge only slightly favors Fiers, but the matchup for Cashner is much harder than that of Fiers. The O’s currently have a projected 22.9% K rate in their projected lineup compared to a 21.8% for the A’s, but the A’s will likely have a whole bunch of righties in the lineup, and Cashner owns a horrible 14.3% K rate and a horrible .391 wOBA. There is a decent chance that Cashner doesn’t make it through the first 4 innings here, whereas Fiers has the ability to go late into the game. One and a half Ks is a decent number to give up for a guy who owns as low a K rate as Fiers, but in this matchup I think it’s close to a lock.

Matt Olson (+.5) vs Khris Davis: Total Runs/RBIs: Looking at their numbers vs. RHP this season, the slight edge here goes to Olson, but the key factor is that Olson is getting the tiebreaker. Runs/RBIs is a very volatile category, and with the A’s projected to score 5 in this game, there’s a decent chance that neither of these guys end up with 1. Add in the fact that Olson is batting in front of Davis, so you have a correlation between the two, as there’s a likely chance that Olson gets hit in by Davis, causing a net 0 for Runs/RBIs. Pick Olson. 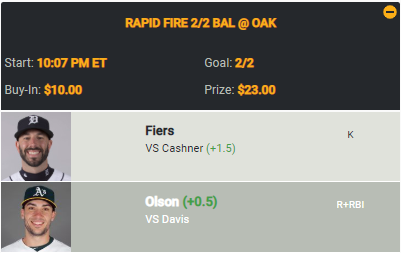