If you haven’t checked out Monkey Knife Fight before, it’s a prop-based fantasy sports website with a variety of props contests you can enter. Unlike other articles here on RotoGrinders, we aren’t just giving you the research – we are giving you recommended picks. First time depositors can use the Monkey Knife Fight promo code ‘GRINDERS’ to get a deposit bonus of 100% up to $50.

Pablo Lopez (+4.5) vs Madison Bumgarner: Total Fantasy Points: In case you aren’t familiar with Monkey Knife Fight scoring, it’s pretty simple (1 point per K, 1 point per out, and -3 points per ER). While I do think that Bumgarner does end up scoring more points than Lopez, 4.5 points is way too many to give up in this scoring system. Currently, Vegas has both teams pegged for roughly the same implied team total, and looking at the K rates for both Lopez and Bumgarner, they are within 2 points of each other. Bumgarner does have the ability to go a little later into games, but this is not enough to make up for the 4.5 points he’s giving up. Take Lopez here for the free square.

Jorge Alfaro (+.5) vs Brian Anderson: Total Fantasy Points: This prop right here comes completely down to the tiebreaker. Looking at the states for both Anderson and Alfaro, they are fairly similar vs. LHP. Anderson has a .133 ISO and .310 wOBA compared to Alfaro with a .158 ISO and .321 wOBA. Yes, Anderson does have the better lineup spot and may end up with an extra at bat, but Bumgarner is a good pitcher and they are playing in an extreme pitcher ballpark, so the most likely outcome is that neither of these guys end up with a point. Take the guy with the tiebreaker every time in this spot.

Joe Panik (+.5) vs Starlin Castro: Total Fantasy Points: Let me start out by saying that neither of these two batters are anything special. Both hitters have very little power and pretty much the only thing they do well is put the ball in play. Panik does have the advantage in multiple areas however. Panik is batting leadoff, going up against the worse pitcher, owns the tiebreaker, and is playing on the road, so there is a decent chance that he ends with an extra AB. I think that both these hitters have an equal expected fantasy output on a per at bat basis, but with everything else going for Panik, he is the much better pick here. 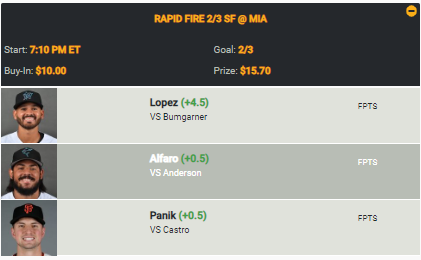 Willy Adames (+.5) vs Justin Smoak: Total Fantasy Points: Let me start off by saying that Smoak is the better hitter, but the matchup is so far in Adames’ direction that it doesn’t matter at all. Smoak gets a matchup against Snell, who may be the best pitcher in the league this year. Snell currently owns a 2.59 xFIP with a 36.4% K rate and has destroyed hitters from both sides of the plate. Additionally, Smoak has been significantly worse going against lefties compared to righties since the beginning of last year (.304 wOBA vs LHP compared to .385 vs RHP). On the other hand, Adames is going up against Thornton, who is an average pitcher with a 4.28 xFIP, and he is an above average hitter vs RHP with a .350 wOBA. Add in that Adames is getting the tiebreaker and it makes Adames a lock.

Austin Meadows (+.5) vs Tommy Pham: Total Fantasy Points: All I’m going to do here is list the numbers vs. RHP this year. Pham has a .210 ISO and .393 wOBA against RHP, compared to Meadows who owns an otherworldly .378 ISO and .491 wOBA. Meadows owns the tiebreaker, the platoon split against an extreme splits pitcher, and is the better hitter in nearly every respect. Just take Meadows and don’t overthink it.

Brandon Lowe (+.5) vs Avisail Garcia: Total Fantasy Points: Looking both at this year and at last year, Lowe has better numbers against RHP (.242 ISO and .368 wOBA compared to .208 ISO and .324 wOBA) and Thronton is a guy with some pretty extreme splits (.351 wOBA vs lefties compared to .283 wOBA vs righties). Lowe is the better hitter with the big platoon split and is getting the tiebreaker. Both are on the same team with the same implied team total, so I’m rolling with the better hitter that’s in the better spot and getting the tiebreaker. 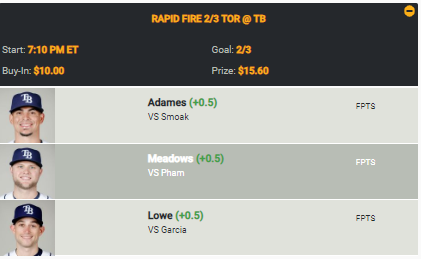 Reynaldo Lopez (+1.5) vs Glenn Sparkman: Total Fantasy Points: This is a spot where you really need to take into account the scoring. Lopez has a much worse K matchup than Sparkman, but Ks are worth the same as one out here and hits and walks are irrelevant if they don’t turn to runs on MKF. Both pitchers have the same implied total against, and Lopez in all reality is probably the better pitcher. He’s getting a free 1.5 points when he should actually be the favorite here. You take Lopez and you move on.

Whit Merrifield (+.5) vs Jose Abreu: Total Fantasy Points: Both the pitchers in this game are fairly bad, and Whit and Abreu are probably equal hitters (only a .002 different in wOBA since the beginning of 2018 vs RHP), so this comes downs to the tiebreaker. It’s honestly a coin flip who ends up with the better score here, but 20% of the time they are going to end up with the same fantasy points, meaning that Whit will win this prop around 60% of the time. Take the guy with the tiebreaker in this situation.

Tim Anderson (+.5) vs Yoan Moncada: Total Fantasy Points: Anderson should make his way back into the lineup today, and looking at the numbers, Anderson is the better hitter than Moncada this year. Versus RHP, Anderson owns a .195 ISO and .400 wOBA this year compared to a strong .250 ISO and .376 wOBA for Moncada. One of the big differences here is that Anderson strikes out at a much lower clip than Moncada (18.7% compared to 29.7% vs RHP), meaning he is going to put the ball in play way more often against a guy in Sparkman who gives up a whole lot of hard contact. Add in that Anderson owns the tiebreaker, and it makes Anderson the obvious choice. 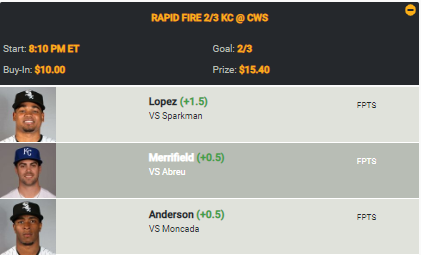