“How do you feel about ‘handcuffing’ in Best Ball?”

I get that question a lot. My standard answer has been something like: “I’m generally against it, because you’re basically buying insurance, and I don’t think the potential payoff is worth the hit to your team’s upside.”

That is usually a satisfactory answer for whomever asks, but I have to admit that it has been based on a combination of personal experience and a not-too-thorough review of the data. I’ve yet to produce an analysis of Best Ball handcuffing that I can point to for support. We’re going to fix that right now.

Editor’s Note: Use promo code “GRINDERS” when you sign up for Draft and get a 100% deposit bonus up to $600 and THREE months of RotoGrinders Draft Premium content!

What is a Handcuff?

In fantasy sports, a “handcuff” is a player whose value is directly tied to another player on your roster, in such a way that if that other player were to miss time, the handcuff would immediately spike in production and fill at least some of the void. The most prevalent handcuffs in football are running backs, though they do exist at other positions. Running back handcuffs are popular for a few reasons. First, running backs get injured at a higher rate than players at the other positions we draft, increasing the likelihood a handcuff will be useful. Then, we have seen many cases over the years where a backup running back, despite being less talented than the starter, has been able to recoup a large percentage of the missing starter’s fantasy points, again making the likelihood that the handcuff is useful appear greater.

Another thing that drives drafters to handcuffs is price; with some exceptions (e.g. Derrick Henry), they can be drafted in the late rounds, when you have already filled the majority of your roster. Names like Knowshon Moreno, DeAngelo Williams and Knile Davis bring back fond memories for those who owned them, often through waivers, during their limited time in the handcuff limelight. Running backs stirring up those memories this year include Jonathan Williams, DeAndre Washington, Devontae Booker, Marlon Mack and D’Onta Foreman, among others. The allure of a practically-free starting running back is strong, but how much good are these lotto tickets really doing as handcuffs on Best Ball rosters? That’s what matters. How much does this pick improve my chance of winning?

Losing an Expensive Running Back is Devastating

In the last Best Ball strategy article I discussed win rate, and where in the draft some of the highest and lowest individual player win rates have been found over the past few years. Win rates for premium running backs who were lost to injury for significant time can help us understand the downside from which handcuffs are meant to protect us. The following table shows the win rates for ten of the highest profile running backs who missed significant time over the past two years (five from 2015 and five from 2016).

Forgive me for stating the obvious, but it is very difficult to win if your top running back gets knocked out! My data comes from 12-team leagues, meaning an average win rate is roughly 8.3 percent. The average running back on that list effectively cut its team’s chances of winning in half. No wonder handcuffs are so popular. So the downside is clearly bad, but that alone doesn’t make handcuffing a smart move. Let’s break the question down into benefit versus cost. 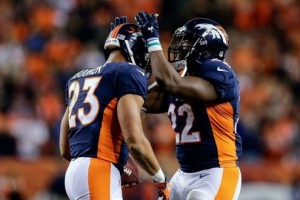 We can use win rate to evaluate the effectiveness of combinations of players, not just individuals. In theory, the handcuffs for the running backs that I highlighted in the table above should have been some of the most successful we’ve seen over the past two years. To evaluate the effectiveness of the handcuffs, I am going to separate teams that owned only the injured RB1 from those which rostered both the stud and his handcuff. For this analysis, I have used what I call “cash rate” in place of win rate. The only difference between the two is that cash rate data includes second and third place (out of twelve) as a positive outcome. I’ve been told that handcuffing could make more sense in formats where more teams than just first place receive prize money, like on Draft. Let’s find out. For reference, an average cash rate is 25 percent.

The average cash rate for teams that opted to draft a handcuff to insure their premium running back was just 1.7 percent higher than it was for the teams that had no such protection. Basically, the results go from very bad to slightly less very bad. I don’t want to ignore the one huge victory for team handcuff, however – as DeAngelo Williams did save many Le’Veon Bell drafters in 2015 (close to 18 percent increase in cash rate). But, without that big win, the average would be negative! In half of the cases, teams which had the foresight to handcuff their soon-to-be-injured RB actually fared worse. And these were the scenarios where handcuffing was supposed to pay off the most! This also highlights another problem with the handcuff strategy: even when it appears obvious which player should be used as a handcuff, we often get it wrong (e.g. Knile Davis over Charcandrick West to backup Jamaal Charles in 2015). So, what about the other side, when the RB1 stays healthy?

As with all insurance, we are really hoping that we never have to use our handcuffs. We pay the premium (i.e. draft pick) and hope that our stud running back stays healthy. Handcuffs are often available late in drafts, and one of the best arguments in favor of handcuffing is the low opportunity cost. But how low is it? To answer that question, I looked at another sample of 10 early-round running backs from the past two years, this time a group that stayed healthy (by running back standards).

In seven out of ten cases, the group of teams which handcuffed fared worse than the group that didn’t, and overall the average decrease in cash rate was close to five percent. This isn’t terribly surprising – the group that spent a pick on a player that went virtually unused did not do as well. More troubling than this five percent drop in cash rate is what happens to win rate. Here is the same table using win rates.

Why is this more troubling, when the average drop is 2.5 percent instead of 4.9 percent? As a proportion of win/cash rate, the negative impact of the handcuff is greater here (17 percent, vs. 13 percent for cash rate). This is why I mentioned “the hit to your team’s upside” in the first paragraph of this article. It is hard enough to win these leagues, and when we get our picks right we want to be rewarded. Is a handcuff worth this self-inflicted headwind?

This has all been very nice, but what’s the bottom line? It’s hard to conceptualize 5% rises and falls in average win rate or cash rate – I hear you. With the understanding that the examples above are not all-encompassing, and that history definitely will not repeat itself, let’s run through a quick expected value calculation based on what we have found. I’m going to do some rounding to make this easier.

For that to hold, our “odds of injury” would have to be at least 71 percent! Worse, that doesn’t account for the fact that payouts are skewed toward first place, when we know the hit to win rate is proportionally worse. Yikes.

Though I took a somewhat complicated route, I risked oversimplifying things a bit with the formula at the end there. Each player and respective handcuff is unique, and their specific circumstances should be taken into consideration when you decide who to draft.

That said, I find the extreme nature of the results from this exercise pretty convincing. If you believe there is anywhere near a 70 percent chance that the player will get injured, or even close to 50 percent, just don’t draft that player – you’ll be better off just selecting a safer player and saving the later “handcuff” pick for someone who can contribute whether your guy gets hurt or not.

When it comes to handcuffing in Best Ball, I’m generally against it, because you’re basically buying insurance, and I don’t think the potential payoff is worth the hit to your team’s upside.