Despite throwing a pick in a tight window early, Garoppolo impressed in his 49ers debut, completing 26-of-37 passes for 293 yards, good for a stellar 70.2% completion rate and 7.9 yards per attempt. The main reason he failed to post a monster fantasy day was five drives that stalled in the red zone and led to field goals instead of touchdowns. The Texans, however, are a foe Garoppolo is more likely to convert touchdowns against. Houston has allowed 23 passing touchdowns, tied for third-most in the league, and over its past three games have allowed 71.4% of opponent drives to end in touchdowns, the fourth-highest rate of any team over its past three games.

Goodwin was already quietly having a good season coming into last week, posting 68 or more receiving yards in four of five games from Week 7 on, which is when the team’s No. 1 receiver, Pierre Garcon, was lost for the season with a neck injury. With Garoppolo, though, Goodwin became a different type of receiver, eschewing his normal deep threat role (his average depth of target coming into the game was 15.1, but was only 9.1 last week) and catching 8-of-9 targets for 99 yards. The Garoppolo-to-Goodwin connection should continue to flourish against a Texans defense ranked 30th and 29th in schedule-adjusted fantasy points allowed to quarterbacks and wide receivers, respectively.

On the other side of the opposing passing game correlation, it should be business as usual for Hopkins. The self-proclaimed best wide receiver in the game is averaging 12.6 targets, 6.4 catches, 95.6 yards and 0.4 touchdowns per game since Week 9 when Tom Savage was reinserted as the starting quarterback. The 49ers, meanwhile, have allowed 9.1 yards per target to opposing wideouts over that span.

The Raiders are ranked dead last in pass defense DVOA. Things are bad:

The Oakland #Raiders have had more defensive coordinators (2) than interceptions (1) in 2017.

Worst interception-to-coordinator ratio of any defense in the NFL. #Analytics

Smith, meanwhile, has been doing his own Russell Wilson impersonation of late, accounting for 82.2% of Kansas City’s offensive yardage and all 17 of its offensive touchdowns from Week 4 on. Tyreek Hill has this weird thing going on where the eight highest receiving yardage totals of his career have all come on the road, but if there was ever a defense to reverse the trend, it would be the Raiders. Oakland is ranked dead last in DVOA versus No. 1 wide receivers, according to Football Outsiders, and has allowed nine receiving touchdowns of 20-plus yards, tied for third-most in the league. 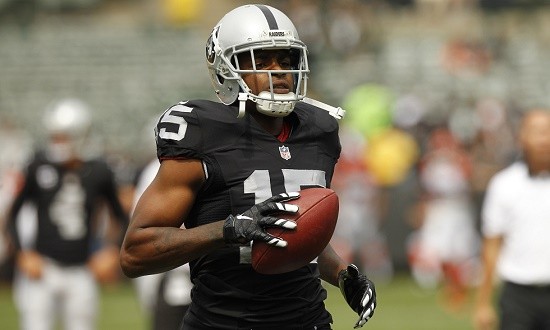 On the other side of the ball, Michael Crabtree will face a Chiefs secondary that will be without it top cornerback, Marcus Peters (suspension). His flag-throwing-related absence will force his team to trot out a cast of characters at cornerback including Terrance Mitchell, Phillip Gaines, and Kenneth Acker, all of whom have been benched at some point this season, and Darrelle Revis, who at this stage in his career couldn’t cover a bench with his own ass.

Giovani Bernard: 63% on FanDuel, 62% on DraftKings

Bernard logged every snap after Joe Mixon departed Monday Night Football with a concussion and the Bengals don’t have any other running backs on the active roster that have registered even a single carry for the team this season. Mixon’s average of 17.2 touches per game from Week 3, when new offensive coordinator Bill Lazor took over, to Week 12 should be viewed as Bernard’s floor, and he has a decent chance of approaching the 24.3 touches per game the team’s backfield has collectively averaged under Lazor. Though the Bengals are a home favorite and have one of the largest spreads of the week (-6.5 as of this writing), Bernard should still be able to produce in negative game script, as he averages 11.3 yards per reception and has caught two touchdowns on 31 targets this season. It’s no surprise, then, that all five experts in the DraftKings Expert Survey (available to premium users) agree that running back is the best position to save salary on this week.

The average DeShone Kizer pass travels 9.8 yards in the air, which is tied for seventh-highest in the league, according to Pro Football Focus. This paid immediate dividends for Josh Gordon, who returned from a three-year hiatus to finish last week fourth in the league in air yards (210), per airyards.com. Gordon drew 11 targets from Kizer at an average depth of 19.1 yards, accounting for 48 percent of the team’s air yards, which would lead the league over a full season. This week, Gordon will face a Packers defense that is already allowing the most schedule-adjusted fantasy points in the league to wide receivers and will be without starting cornerback Kevin King (IR – shoulder) along with possibly their other starter, Davon House (shoulder), who failed to practice Wednesday and Thursday.

The Texans have suffered a litany of injuries to their pass-catching corps lately, losing not only Fiedorowicz but also slot receiver Bruce Ellington (hamstring) for the year and Braxton Miller (concussion) likely for this week. Even with Will Fuller (ribs) scheduled to return, the loss of Fiedorowicz and the slot receivers should open up some targets over the middle for tight end Stephen Anderson, drew 12 targets last week, including four inside the 10-yard line. At “only” 230 pounds, Anderson is a pass-catching tight end whose 40-time (4.65) ranks him in the 80th percentile at the position, according to Player Profiler. The 49ers were a defense to fear versus tight ends earlier in the year with safety Jaquiski Tartt putting the clamps on, but Tartt was lost for the season in Week 9 and San Francisco has allowed four touchdowns to tight ends over its last four games. Enhancing Anderson’s odds of getting enough volume is that the Texans have actually become more pass-heavy under Tom Savage, averaging 39.6 attempts per game in his last five starts after averaging 30.1 attempts per game in the six starts from DeShaun Watson.