We have an MLB freeroll on SuperDraft tonight! ENTER HERE

I’m excited to be back for another week of Risers & Fallers! Each week, I’ll break down a handful of players using advanced metrics, insights from my scouting background, and my DFS projection system THE BAT (available in the RotoGrinders Marketplace), which consistently beat Vegas lines last year.

Rising… To Become The Next Alex Wood

While I’ve been saying since last year that Alex Wood is a legitimately good pitcher and since early this year that he’s a top-five starter in baseball, this isn’t really news anymore. You’d be hard-pressed to find anyone who’d argue against Wood’s talent these days. Even those who cling to name-value above all else and won’t quite concede top-five status will freely admit that Wood is an excellent pitcher. So it’s time to move on and find a new crush. Enter Jose Quintana.

Quintana is not quite a top-five pitcher, but THE BAT does currently have him as a top-seven pitcher, which is bound to be a controversial statement. The list:

This will surely draw gasps from the name-value crowd and probably even from many of the more mathematically-minded among us. But Quintana has quietly been a top 15 or so pitcher for the past several years, and this year he’s taken his game to the next level by adding more strikeouts to his profile. That’s always been what has held him back, a lack of strikeouts, but he’s shown great control and prevented home runs, and now whiffs are a part of his game. Mitchel Lichtman (one of the creators of The Book) tweeted a few weeks ago that he had Quintana projected as a top three pitcher, so THE BAT is not alone in its love. 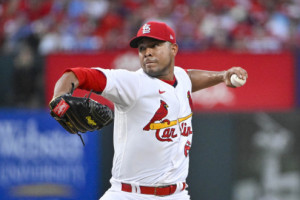 The main reason I bring Quintana up, though, is because he’s become this caliber of pitcher while playing for the Chicago White Sox, the MLB club equivalent of an afterthought. Over his years with them, he’s thrown to some terrible pitch-framing catchers, had some bad defenses behind him, pitched in a hitter-friendly park that is great for home runs, and pitched in the American League. Part of the reason why THE BAT likes him so much is because when you account for all of this context and neutralize Quintana’s stats, he projects even better than he would if you’re just looking at his peripherals. Those peripherals, while good, would be even better in a neutral context.

It’s part of the reason why Chris Sale has seemingly stepped his game up this season after leaving the White Sox. It’s also why THE BAT likes Quintana more than pitchers like Stephen Strasburg or Jacob deGrom or Madison Bumgarner, who many will likely point to as reasons why Quintana can’t possibly be a top-seven pitcher. You have to account for context, though, and these guys all throw in the National League, in pitchers’ parks, and to good catchers (Stras less so than the other two on this point). That inflates their numbers, and if we’re talking pure talent level, independent of context, Quintana is absolutely in this tier of pitcher. Less than 10 points of ERA separates Quintana at #7 from Bumgarner at #16; it’s a huge tier that’s largely splitting hairs, but as of right now Quintana is at the head of the pack and is about to move into a much more friendly set of circumstances.

The Cubs traded for Quintana last week, which means he’ll now get to pitch in the National League, to a slightly above-average pitch-framer in Willson Contreras, in an extreme pitchers’ park on wind-blowing-in days, with an excellent defense behind him, and with much more offensive support for wins.

I’m fully prepared for the same type of reaction I got when I boldly said “”(player-popup #alex-wood)Alex Wood”:/players/alex-wood-15846 is a top 5 pitcher,” (read: jeers, laughter, calls of how stupid I am, how this is such a Skip Bayless “give me some attention” take, and how I should watch a game sometime) but by the end of the year there will be many more Quintana believers the same as there are Wood believers now Until then, feel free to take advantage of the low prices and low ownership on Quintana’s next few starts. As an added bonus, unlike the frequent quick hook Wood gets, Quintana goes very deep into games (assuming Joe Maddon doesn’t try to get too cute with him).

Falling… Perhaps to His Metaphorical Death

Poor Bart. Poor Big Sexy. It almost feels like a need to write him a eulogy, because his time in baseball may be at an end. (Highly fictionalized) reports out of Minneapolis are that his final words before signing his contract with the Twins were “remember me how I was.” Bartolo had a good run, defying all laws of baseball and physiology by remaining a league average pitcher well into his 40s despite throwing two 88-mph fastballs 85 percent of the time.

Father Time caught up to Bartolo in Atlanta this year, though, and Minnesota figures to be even more unforgiving. He’ll be pitching in the American League for the first time since 2013, and he’ll be doing so in a sneaky-good hitters’ park in Target Field. He’ll throw to a good pitch-framing catcher in Jason Castro, but that doesn’t figure to be enough, especially since he was working with a comparable one in Tyler Flowers in Atlanta.

He makes his first start in a Twins uniform on Tuesday against the Yankees, and it’s not likely to go well. He’s not truly 8.14-ERA bad like he was an Atlanta, but we should expect an ERA well north of 5.00 as a member of the Twins.

One of my Twitter followers mentioned how Colon may have been considering signing a one-day contract with the Indians (for whom he debuted as a rookie in 1997) to close out his career, and how he was disappointed that Colon latched on with Minnesota instead. Fear not, though, because there’s an excellent chance Colon will have the opportunity to sign that one-day deal later on this year after the Twins inevitably cut him loose.

Not Falling… (Sort Of)

Literally Everyone Who Participated in the Home Run Derby

For years, there’s been a narrative that players who participate in the Home Run Derby struggle in the second-half of the season. It’s called the Home Run Derby Curse or the Home Run Derby Hangover. The story goes one of two ways. One: players struggle in the second half because of the energy they expend during the Derby on all of those max-effort swings in such a short period of time. Two: players change their swings to try to hit more home runs during the Derby, and they struggle to regain their previous form once they’re back in normal game action. While both of these make at least some intuitive sense, the math simply doesn’t support it.

Or, at least, good math doesn’t support it. If you were to look at all the players who play in the Home Run Derby and compare their first half stats to their second half stats, you would find a significant drop-off in their collective home run rates. Some like to use this as the evidence that players decline as a result of participating in the Derby, but they’re wrong. This is bad analysis, ignoring one crucial consideration: the inherent selection bias in who participates in the derby in the first place and the all-powerful effect of regression to the mean. 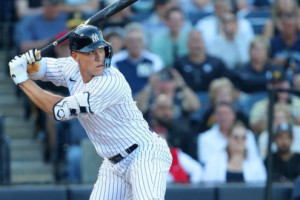 Have you ever seen a player with five first-half home runs selected to the Derby? Of course not, because Derby selections aren’t random. Derby participants are chosen because they hit a lot of home runs in the first half of the year. And absent additional information (or given a large enough sample of players), a group of baseball players who perform better than average will always (literally always) perform worse going forward. If you’re not familiar with statistics, that may sound like a somewhat outlandish statement, but it’s a basic, proven law of the universe. There are exceptions for individual players and for small samples, of course, but on the whole this is true 100% of the time. And so because the Derby participants performed so well in the first half, we would actually expect them to get worse in the second half, as a group. That the results show this doesn’t mean the Home Run Derby Curse exists, it means that these players are obeying the laws of statistics. We’d expect them to get worse whether they play in the Derby or not.

Early on in my career, when I was managing the fantasy section of The Hardball Times, I ran a study that looked at the second-half decline of Derby players and compared it to the decline of comparable players who had the same home run rates in the first half but didn’t participate in the Derby. As expected, I found that the declines for the two groups of players were practically identical, indicating that the Derby had no effect. I ran a second study there as well using projections and came to a similar conclusion. Neither of these are quite definitive, especially as I did them quite early on in my career, but they explain the fallacies surrounding the Derby and serve as a good piece of evidence why the Home Run Derby Curse almost certainly does not exist. RotoGrinders blogger Joe Cistaro also wrote about this recently.

It’s possible that there is a small subsection of players who, for whatever physical or mechanical reason, are affected by the Derby while the group as a whole is not. Certain swings may be more conducive to being thrown off by all those home runs swings or by attempting to change the swing for the Derby, but even if a small number of players like this exist, it would be very difficult to actually identify them with any kind of certainty unless you have a very keen scouting eye. By sheer odds alone, it’s likely we’ll see at least of the participants get off to a slow start in the second-half, and there are bound to be a few DFS touts who point to the Home Run Derby Curse as the culprit. They can safely be ignored and the slow start chalked up to variance in the absence of any tangible evidence why this player is different than the rest.