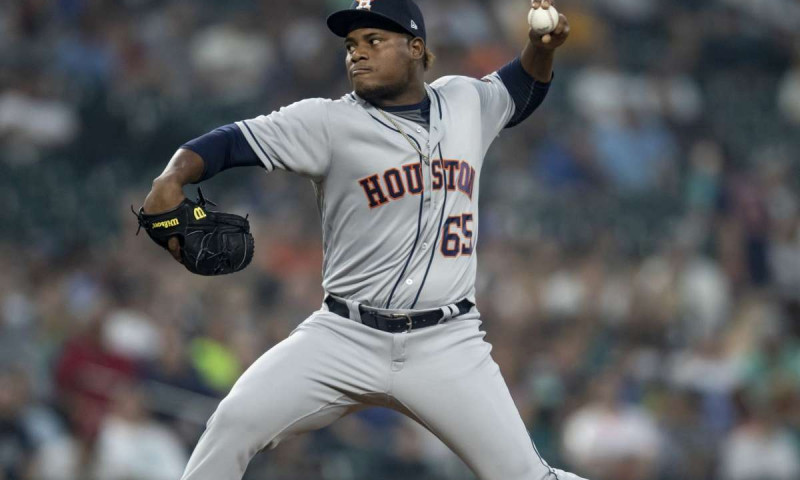 MLB betting analyst Nick Galaida previews Game 1 of the ALCS, breaks down Red Sox vs. Astros odds and delivers his own prediction (and free pick!) for Friday, October 15, 2021.

On Friday evening, the Boston Red Sox and the Houston Astros will battle in the American League Championship Series at Minute Maid Park. Boston is making their first ALCS appearance since 2018. Houston will be playing in their fifth consecutive ALCS. In Game 1, the Red Sox will send Chris Sale to the hill. He will be opposed by Framber Valdez. Oddsmakers are anticipating the Astros securing a win in the series opener, pricing Houston as -139 home favorites.

Let’s take a deeper look at the matchup to see where bettors can find value at sportsbooks for Game 1 of the ALCS.

Chris Sale missed the entire 2020 campaign after undergoing Tommy John surgery. He returned for the latter half of the 2021 regular season, making nine starts, during which he posted a 3.16 ERA, 3.49 xERA, and a 3.69 FIP. Sale is a household name that will grab the attention of many bettors, but he is no longer one of the most dominant pitchers in the league. In his last three trips to the mound, he has surrendered 10 earned runs in only 8.2 innings of work. His Game 2 performance in the division series against the Tampa Bay Rays was a disaster, allowing five earned runs in only a single inning on the mound. Sale will find it difficult to get back on track tonight against a strong Houston lineup.

Against left-handed pitching in 2021, Boston ranked eighth in OPS, 18th in ISO, 19th in walk rate, and had the third-best strikeout percentage in baseball. The Red Sox are likely to have six or seven right-handed batters in the lineup tonight, depending on whether or not Manager Alex Cora decides to go with Kyle Schwarber or Bobby Dalbec. Against lefty Shane Baz in Game 2 of the division series, this righty-loaded lineup scored three runs in the first two innings and totaled 14 for the game. They also tagged southpaw Shane McClanahan for five runs in less than an inning of work in Game 4. Boston is equipped to do damage in this one at the plate.

Tanner Houck is a wild card in this series. He delivered five dominant innings in Game 2 of the first round, playing hero after a horrendous outing from Sale to start the contest. He has a nasty slider that could be a tremendous asset out of the bullpen, if Cora decides to use him in that role. Houck could be especially valuable in an Andrew Miller-esque role for this group, considering the struggles that Boston’s bullpen has experienced in recent weeks. Against Tampa Bay alone, they blew multiple late-inning leads. This is a unit with question marks heading into Friday’s action.

Valdez missed the beginning of the campaign due to injury, but was excellent in 22 starts once joining the rotation—posting a 3.14 ERA, 3.78 xERA, and a 4.01 FIP. However, he was less effective at home than he was on the road, delivering a 4.17 FIP and a concerning 12.4 percent walk-rate at Minute Maid Park. He was surprisingly better against right-handed hitters than he was against lefties, which could indicate that he is prepared to effectively handle the heart of Boston’s lineup. Still, Valdez is far from a trustworthy option for bettors on the mound. In Game 2 against the Chicago White Sox, he was tagged for four earned runs in only 4.1 innings of work, which was the fourth time in his last six starts that he had allowed four or more earned runs. Valdez is a risky play tonight against a strong Red Sox offense.

Fortunately for Astros fans, their path to victory in this contest does not solely rely on their starting pitcher. Against southpaws during the regular season, Houston’s lineup ranked fourth in OPS, fifth in ISO, 14th in walk rate, and had the best strikeout percentage of any team in the league. In Game 2 of the division series, Houston scored three runs off of lefty reliever Aaron Bummer in only one-third of an inning of work. The Astros forced lefty Carlos Rodon from Game 4 before the end of the third inning, thanks to some disciplined at-bats. Houston could do damage tonight against Sale in the early part of this ballgame.

Similar to Boston, Houston has significant question marks in their bullpen. Their issues have become even more salient after the news that Lance McCullers will be out for the ALCS, likely forcing Zack Greinke and either Cristian Javier or Jose Urquidy into the starting rotation. Manager Dusty Baker has two fantastic options at the backend of his bullpen with Kendall Graveman and Ryan Pressly, but Phil Maton, Yimi Garcia, Ryne Stanek, and Brooks Raley are far from elite options to bridge the gap from the starter to the latter frames.

These are two evenly matched teams with elite offenses and suspect pitching staffs. The market price on the total for this game is 8.5, but FanDuel has both team totals currently at 4 runs or less. Instead of playing the over for the full game, play each club’s team total, limiting your exposure, while simultaneously giving bettors the opportunity to cash both wagers in a high-scoring affair.