After an unusual Week 12 that included two of the best fantasy performances we’ve seen all season, it’s time to dive into our 12 weeks of salary data and identify some values in Week 13. 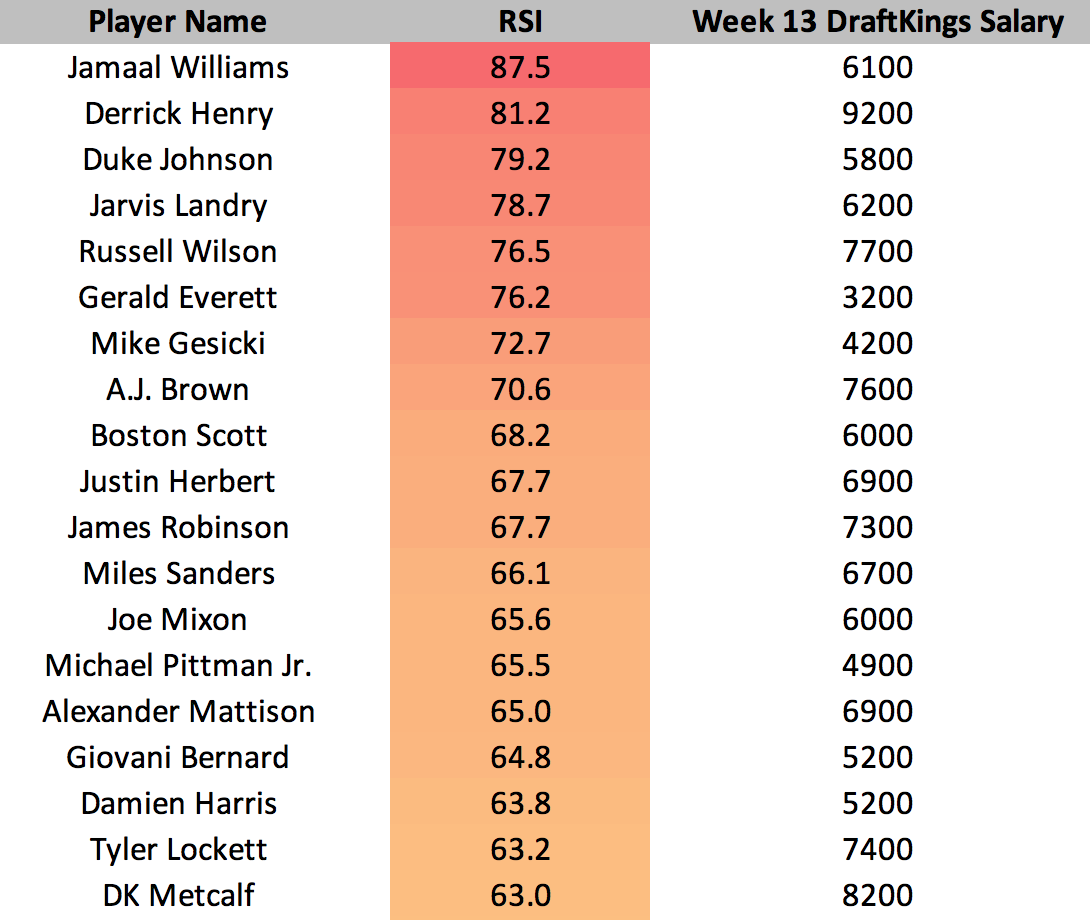 The Packers backup RB saw an unexpected $700 price increase after earning 17 carries on Sunday night against Chicago. Among reserve rushers, Williams is certainly one of the most valuable for season-long fantasy purposes, but this is a DFS article. Unless something happens to Aaron Jones, Williams’ $6100 price tag is simply too much to make him viable in any circumstance. The 17 carries on Sunday could convince some DFS players to consider taking a flier on Williams in Week 13, but when a team like Green Bay is in control of a game from start to finish, their backup rusher tends to get a significantly higher workload than normal.

Johnson’s 17-point outing on Thanksgiving was certainly a blessing for fantasy owners that had been rostering the veteran in his time as the Texans lead RB. Unfortunately for Duke, David Johnson’s likely return from IR puts his Week 13 status as the Houston starter in question. Even if Duke can hang onto the starting job for another week, he’s averaged just 3.1 yards per carry since Week 9 and hasn’t eclipsed 20 DraftKings points this season. Facing an Indianapolis team that’s surely going to focus on their Week 13 run defense after what Derrick Henry did to them, this is the perfect slate for 0% exposure to Duke Johnson.

Landry clocks in at a season-high price tag after his only promising fantasy outing of 2020, catching 8/11 targets for 143 yards and a score. While Landry has the talent to turn most high-target outings into strong fantasy performances, the combination of Baker Mayfield under center and a run-centric offense showcase that Sunday was a true outlier for 2020 Jarvis Landry.

Thus far, Cleveland has attempted a pass on just 48% of their plays, which is tied with Baltimore for the lowest pass rate in the NFL. Baker Mayfield has attempted more than 30 passes just three times all season, all of which came before Week 6. Unless Landry can nearly double the 26% target share he’s seen since Odell Beckham went on IR, he won’t earn the double-digit targets he needs to be fantasy relevant in this offense.

Robinson has been one of the most exciting and unexpected fantasy stars of the 2020 season. While I have no doubt J-Rob will continue to see a massive workload, I do have significant doubts about the viability of this offense without Gardner Minshew. Jacksonville has averaged a brutal 18.3 points per game since Minshew went down, and Mike Glennon offers little hope of improvement in that regard. More crucially, Robinson has only ceded playing time when the Jags find themselves down double-digit scores, a likely outcome as 9.5-point underdogs to Minnesota in Week 13. With touchdowns and oftentimes late-game passing work being crucial to PPR RB success, it’s difficult to see Robinson as anything other than overpriced at $7300. 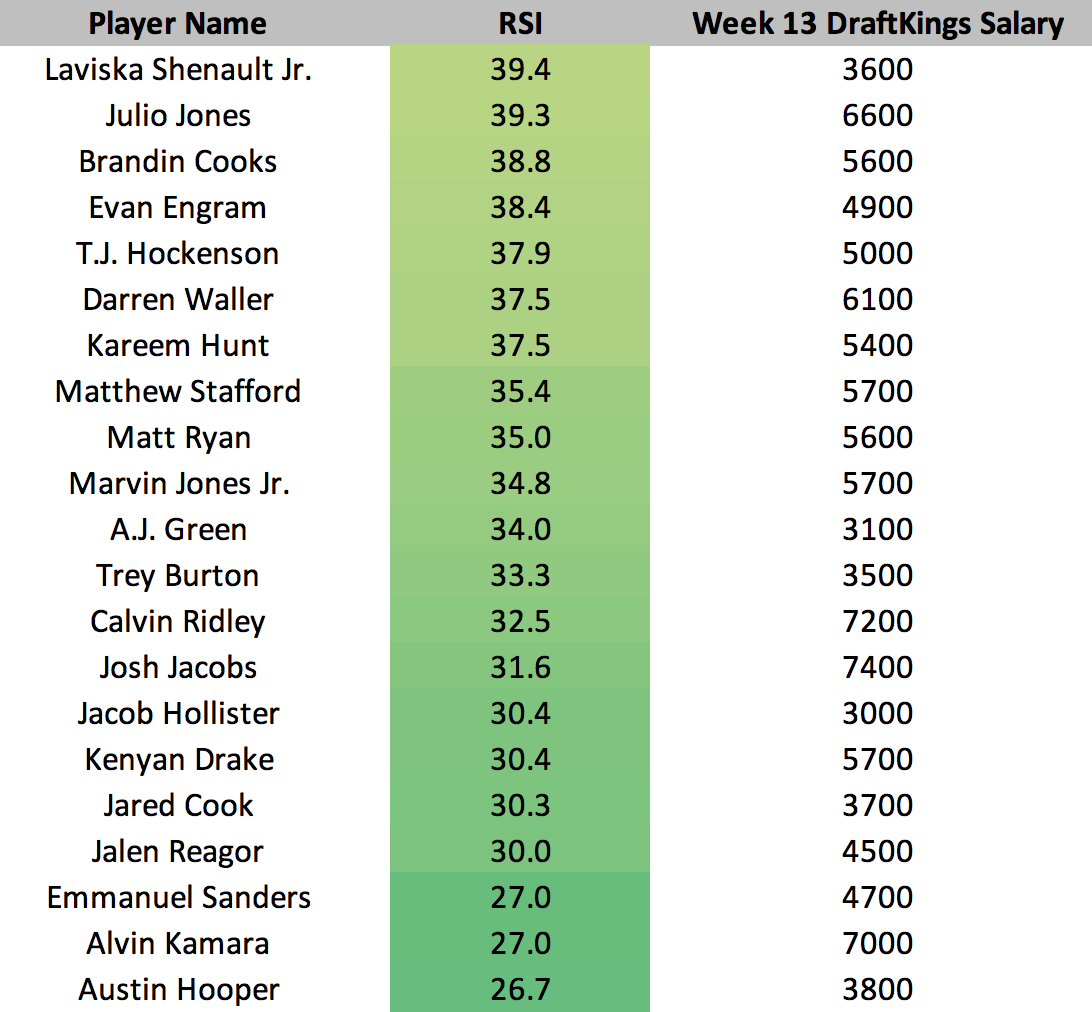 Alvin Kamara, Emmanuel Sanders, and Jared Cook all clock in on our Fantasy RSI undervalued list due to significant price drops with Taysom Hill under center. Unfortunately, I can’t recommend rostering any of these three given the poor fantasy outings we’ve seen come out of this group over the last 2 weeks. With Drew Brees slated to return in Week 14, we may need to wait just one more week before we can comfortably roster these Saints again.

Drake saw 22 carries and ran 16 routes in what was his highest usage game of 2020 against New England. Drake’s lackluster season has been primarily due to minimal pass game involvement, but Sunday was the first time since Week 6 we saw Drake run a comparable number of routes to backup RB Chase Edmonds. Whether that’s an outlier or the start of a trend, we can’t be sure, but Drake has the crucial bonus of being the only player on Arizona other than Kyler Murray who sees goalline work. In the last 2 weeks, Drake’s 7 carries inside the five-yard line rank first in the NFL, while his 12 red zone carries rank second. With the Cardinals averaging 27.6 points per game, Drake’s goalline role in a top-notch offense could easily produce some outlier multi-TD games moving forward.

One of the NFL’s most gamescript-dependent RBs gets the Week 13 luxury of facing the New York Jets as 7.5-point favorites. Barring the most unexpected outcome of the year, the Raiders should control this game from start-to-finish, providing Jacobs with major fantasy upside given his 42% touch share over the last 4 weeks with LV leading. In his career, Jacobs has averaged 18.8 DraftKings points per game with the Raiders as a favorite, compared to just 15.0 as an underdog. With both Derrick Henry and Dalvin Cook on the Week 13 main slate, Jacobs offers comparable upside for significantly lower ownership, a luxury for large-field GPPs.

Will Fuller’s PED suspension and Deshaun Watson playing out of his mind both provide massive boosts for Cooks ahead of the Texans Week 13 matchup with Indianapolis on Sunday. The veteran WR already offered an impressive 10.6 average depth of target (ADoT) and a 22% target share with Will Fuller in the lineup. Now that Fuller’s 21% target share is out of the mix, Houston has no choice but to feed Brandin Cooks. With likely fill-in candidate Kenny Stills being waived and all other WRs on the roster being perennial slot options (Cobb and Coutee) or return men (DeAndre Carter), Cooks only competition for targets outside the numbers is Isaiah Coulter. At $5600, there won’t be a better value play than Cooks in Week 13.

Assuming Jones plays in Week 13, this provides an eerily similar setup to Week 6, when Jones was $900 cheaper than teammate Calvin Ridley and went off for 36.7 DraftKings points at a fraction of his usual ownership, despite entering the game questionable with the same hamstring injury he’s dealing with now. If Jones carries his questionable tag into Sunday but still suits up, he immediately becomes a top-5 option at WR thanks to his season-low salary. Facing a Saints team that’s been rather mediocre in coverage all season (14th in PFF coverage grade), Jones’ questionable status could be one of the strongest ownership edges of the season. He just needs to play.