Sonny Gray vs Pablo Lopez (+3.5): Total Fantasy Points: This is a really easy one. Lopez hasn’t pitched in the majors in the last few months and is just now rejoining the rotation. He did throw 6 innings in AAA last week, but we are uncertain how long he’s going to go, and Gray has been on a completely different level recently and is pretty much a lock to shut down this horrible Marlins lineup. He has a full run lower run total against and has by far the better matchup and numbers. Just roll with Gray.

Bryce Harper (+.5) vs Christian Yelich: Total Fantasy Points: Both of these hitters have similar matchups against pitchers with some pretty heavy splits, but I’m giving the slight edge to Harper because of the tiebreaker. Realistically, these two are a coin flip, but there is a 20% chance that they tie in this spot (in which case Harper would be the winner). There’s not a whole lot of analysis to do — just take the guy with the tiebreaker.

Adam Wainwright (+.5) vs Gio Gonzalez: Total Fantasy Points: Looking at the overall numbers for these two pitchers, they are pretty close to the same. Yes, Gonzalez does have the better matchup and the lower run total against by half a run, but a lot of that accounts for Milwaukee having the better bullpen. Wainwright has the higher Vegas strikeout prop and can likely go later into the game here. Add in the fact that he’s getting the tiebreaker, and he’s the right choice. 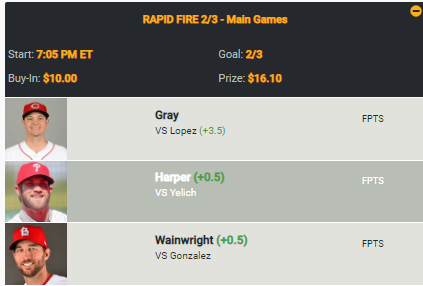 Jason Vargas (+.5) vs Joe Musgrove: Total Fantasy Points: Everyone knows my love for Vargas, and he hasn’t been the same pitcher since going to the Phillies, but they are a much worse team going up against lefties. Vargas currently has a .5 run total against in this game and he’s getting the tiebreakers. Both pitchers have similar strikeouts props, and I think that Vargas is the favorite to outscore Musgrove without the tiebreaker.

Rhys Hoskins (+.5) vs Bryce Harper: Total Fantasy Points: There are a lot of factors in favor of Harper in this situation. He has better numbers against RHP this season and he’s going up against a pitcher with some pretty extreme splits, yet Hoskins is getting the tiebreaker. These two are essentially a toss-up in regards to who posts more fantasy points, so you roll with the hitter with the tiebreaker.

J.T. Realmuto (+.5) vs Starling Marte: Total Fantasy Points: This prop is simple. Marte has been absolutely horrible this year against LHP, owning a terrible .295 wOBA, and although Realmuto is much better vs LHP, he still has much better numbers vs RHP than Marte does vs LHP. He’s hitting in the better lineup with the higher implied run total here. Take the free tiebreaker with Realmuto. 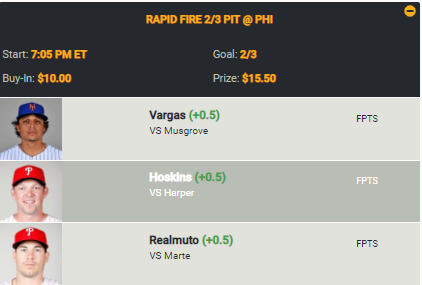 Tyler Beede: Over 4.5 Strikeouts: Beede might not be a great pitcher, but the juice over in Vegas is pretty heavy on the over for 4.5 Ks in this matchup (currently sitting at -149 at the time of this writing). He draws a matchup against a tough Diamondbacks lineup, but they do strike out at a decent clip and 4.5 is a low total for Beede. Back the over.

Alex Young: Under 4.5 Strikeouts: Alex Young is not a good pitcher and is an even worse K pitcher. On the season, he owns one of the lowest K rates on the slate at 18.4%. This SF lineup may be bad, but they are a fairly low strikeout team outside of Belt, and the juice is heavy on the under here sitting at -135. Take the under.

Brandon Belt: Under 1.5 Hits/Walks: Belt is stuck here in a lefty/lefty matchup and is probably going to be batting 7th in the order here. Two hits/walks is a very tough number to hit when there is a decent shot that he doesn’t even get five ABs in this matchup here. This one is pretty darn close to a lock and load. 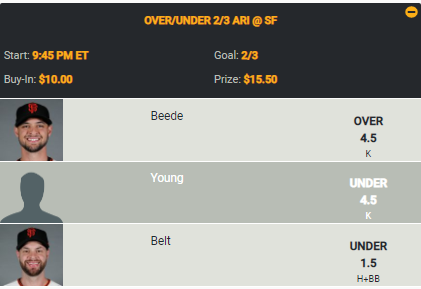