Visit the SugarHouse sportsbook for an instant deposit bonus up to $200 with just a one-time play through!

With the small parlay already in on the Brewers plus Dodgers, a non-recorded series bet on the Dodgers, and Dodgers championship future there doesn’t seem to be any necessity to place further action on this game with the home team up to -250 in some spots.

I do have interest in some reverse line movement in college tonight. The middle game pits Middle Tennessee State at Marshall in a game that opened at a touchdown and is now down to -4 with the heavy vig on the dog or even off the board in some places with the vast majority of the action on the favorite. There’s a similar story with the total dropping three points. I’m going to venture a moneyline play here along with the under.

While there’s also reverse line movement in the late game with Utah St visiting BYU, these teams have played such vastly different schedule strengths, that it’s hard to compare any numbers.

As I went to confirm, the game was taken off the board. I don’t want to hold this up any longer, but will be playing at +150 and 50 or better when action returns and will update accordingly.

Update: The line has just returned at -3, another large jump, so I feel a bit more comfortable taking +135 on the dog.

Here are some thing we know for sure tonight. Temperatures are going to be in the 50s in Boston. The Boston bullpen has struggled through the last month (4.65 FIP, 13.1 K-BB%). The Yankees have an incredibly deep lineup. Each of the eight RHBs in the lineup are above a 115 wRC+ and .190 ISO vs LHP. Seven of the eight are above a .240 ISO.

What we don’t know for sure is the status of Chris Sale. If a mechanical tweak fixes all ills, the Yankees could be in trouble tonight. J.A. Happ is no match for a healthy Chris Sale. However, the Boston lineup may be even stronger than the Yankees up top, but it’s only half a lineup deep and the Yankees have one of the best bullpens in baseball. 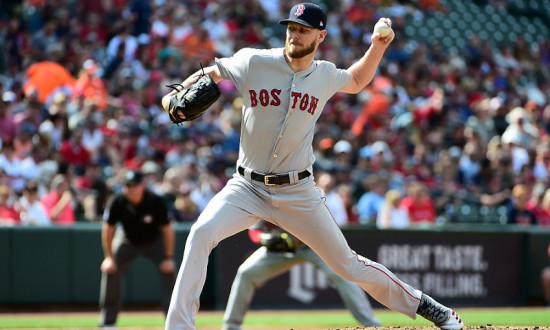 I think the Yankees have a shot in this game and the series. The +125 line on the series is not large enough for my liking, especially if Sale is back to his normal self, but I will take a chance at this price in Game One that he is not.

An extra benefit, FanDuel insures your bet if your team is winning after six innings and loses.

Back one more time with any final thoughts on the Dodgers/Braves and tonight’s college football offerings.

A more extensive preview for the series between the Rockies and Brewers is contained in yesterday’s post. While both teams have quality bullpens it might be safe to say that they are a bit over-worked, though with the Rockies trailing in the series, they may not be able to give Tyler Anderson a long leash. The Brewers can be a bit more lenient with Jhoulys Chacin. The Rockies did not hit RHP well (82 wRC+) and do not hit well on the road (78 wRC+). Chacin has large platoon splits, but the Rockies seem to have done him a bit of a favor leaving David Dahl on the bench.

Considering the colder weather in Boston, Milwaukee might be the most positive run environment in play today. While I like the Brewers here, I’m uncomfortable laying a price of -160 with Chacin. The Brewers are a team, up and down the lineup, that hits the ball hard against LHP. Anderson had a 36 GB% against batters from either side of the plate this year. If the Colorado bullpen has to enter the game early, they may be a bit tired. Unfortunately, player HR props are tied to team victories, however, DraftKings has some nice prices on Brewer bats to score or drive in runs.

Also, because I still like the Dodgers to make short work of the Braves in the late game as well at a high price…

I had to watch most of the Rockies and Brewers on an ipad via Gameday because FS1 was not available on hospital TV, but I did find that their wifi worked well enough to put in a series play on the Dodgers (which will not count here because it was not recorded here before the first game). This is great, but also scary at the same time depending on what drugs the patient ends up receiving.

I arrived home just in time to see the top of the ninth inning in Milwaukee, which nearly sent me right back to the hospital. The Brewers did pull it out though.
A little too much fancy play syndrome in the late game, playing both ways, but no harm done.

Today is the only day of the post-season where we are guaranteed four games. I’ll handle a preview of the first game here and then be back before the second with another and so on. Any site specific promotions taken advantage of will be covered here as well.

The afternoon kicks off with the Indians and Astros in Houston, one of two extremely negative run environments in play. As the park has dome capabilities, there are no weather considerations. The Astros had the far superior regular season record, but were just a few games better at home than Cleveland was on the road.

I don’t think the gap between these teams is nearly as large as indicated by season records.

The Astros still had an above average 104 wRC+ with just a 19.2 K% vs RHP this season, but they were not nearly as dominant this season and had just a 12.6 HR/FB against RHP. At various times, each of George Springer, Jose Altuve and Carlos Correa have been injured and each of their offensive performances suffered this season, while Alex Bregman emerged as a star and carried this offense at times. 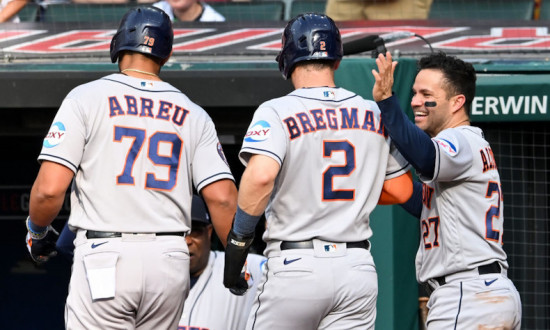 The Cleveland offense was actually better than the Houston one against RHP this season (107 wRC+, 18.8 K%, 14.1 HR/FB, 24 Hard-Soft%) and if Josh Donaldson is healthy (149 wRC+ in 60 PAs for Cleveland) the All-Star quality offense in this lineup runs even deeper.

Just as important for Cleveland is the health of Andrew Miller, who allowed four of his 16 runs this season in his last season outing, striking out just one Royal. Never the less, the bullpen for the Tribe had a 3.67 FIP and 16.9 K-BB% over the last month of the season, which compares favorably with the Astros (3.75 FIP, 18.2 K-BB%).

While the Astros shift well, they had a team -1.7 UZR/150 compared to the Indians +6.2 UZR/150, which trails only the Boston defense among post-season teams.

The quality of both pens along with the last month of each starter results in a 6.5 run total. I can’t remember another one below seven this year. All four sites most commonly employed here are pretty uniform in their +135 price on the Astros with a range between -155 to -162 for the home team.

DraftKings and SugarHouse each have a -177/+140 price on this series, while neither FanDuel nor BetStars have a price at all. Bet Stars does have a Verlander strikeout prop set at eight or better, but -150. A mentioned above, the Cleveland offense had an 18.8 K% vs RHP this year. Today’s specific lineup in PlateIQ had an even better 17.7 K% vs RHP this year. My quick and easy strikeout projector, which does not account for the potential for a quicker post-season hook, has Verlander at 7.5 Ks today.

I already have the Indians future at +1000 (below), which will essentially act as my series play here and I don’t really feel all that confident in a side or total play for Game One right now. I’ll be back before 2pm ET if that changes or before 4 PM ET with thoughts on Game Two in Milwaukee if not.

I currently have the following WS winner futures active:

The Sharp Side app (available on iOS) is back with another big contest this weekend, including Saturday, Sunday and Monday games. Over $1K in prizes are currently up for grabs. Just download the free app and make your picks.