Anibal Sanchez (+.5) vs Vincent Velasquez Strikeouts: Looking at the numbers between these two pitchers, they are pretty similar. Last year both K rates were around 25% and both face a team with a K rate around 20% versus their respective handedness. With similar numbers, I’m going with the guy who is getting .5 Ks for free. I think in this matchup they likely end up with the same K numbers. I think that Velasquez has a little more upside, but there is always a decent chance that he ends up walking a few guys and gives up a few bombs, getting him pulled early. Overall, I think Sanchez wins this 6/10 times.

Ryan Zimmerman (+.5) vs Anthony Rendon RBIs/Runs: This one is pretty simple here. Both hitters are fairly similar, with Rendon being slightly better, but RBIs/runs are a fairly volatile category, so you go with the guy who is getting the free .5, as there is a decent chance that neither end with any. The implied total for the Nationals is sitting at 5.11 at the time of this writing, meaning that on average each hitter will end with around one run/RBI (obviously there are hitters more or less likely to end with one or more and it rarely ends this way). Overall, know the volatility in the category and roll with Zimmerman.

Bryce Harper (+.5) vs Rhys Hoskins Total Bases: It kills me on the inside to say this, because Hoskins is the best hitter in MLB history, but Harper is the much better play here. Both players have similar numbers vs. righties, with Harper getting the slight nod, and he is also getting the free .5 total bases. This is a clear “don’t overthink it” spot. Take Harper and move on. 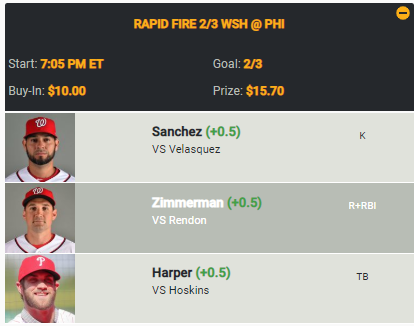 Aaron Judge (+.5) vs Alex Bregman RBIs/Runs: Yes, Judge does have the much worse matchup and there is a decent chance that he doesn’t even get a hit in this game, but Bregman doesn’t have an easy matchup either. Both batters have similar numbers vs. RHP, and although Verlander does have a much better K rate, both pitchers side within .3 of each other in xFIP last year. I’m taking Judge.

Jose Altuve (+.5) vs Luke Voit Total Bases: This one is the free square in this prop. Altuve has the better matchup, is the better hitter, his team has the higher total, and Altuve also has the tiebreaker. There is a very real chance that Voit ends up without a hit during this game about 25% of the time, and the other 75% of the time he gets one Altuve will likely match or one up him. This one hits about 75% of the time here, so take Altuve and move on. 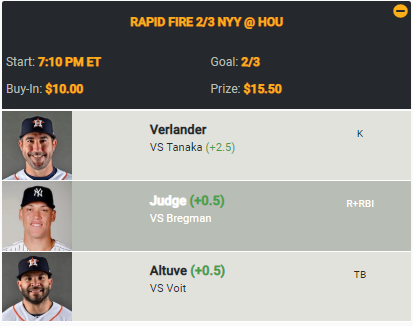 Wil Myers (+.5) vs Manny Machado Total Bases: This one was by far the toughest of the three parts of this prop. Machado is outplaying Myers right now, but last year they both had good numbers vs. LHP (.350 wOBA vs .396 wOBA). Overall, I decided to go with the guy owning the tiebreaker, as Myers’ high K rate vs. Bumgarner’s low K rate will likely play to Myers’ advantage.

Evan Longoria (+.5) vs Ian Kinsler Runs/RBIs: This one’s another free square here, as Longoria has the advantage in every single category. He has the better matchup (Lauer compared to Bumgarner), has the better numbers (.314 wOBA vs LHP compared to .218), the higher implied team total (3.67 compared to 3.33), and Longoria gets the tiebreaker in a very volatile category. With the Padres only projected for just over 3 runs, it’s very fairly unlikely that Kinsler even gets a run or RBI, so you take Longoria every single time.

Brandon Belt (+.5) vs Buster Posey Runs/RBIs: Belt does have the tougher matchup at first glance here, but last year did show a bit of reverse splits, owning a .369 wOBA vs lefties compared to a .345 wOBA vs righties. Belt and Posey are similarly good hitters and with Belt batting in front of Posey, it’s likely that if Posey does get an RBI, then Belt will be the guy hit in a large percentage of the time. With Belt owning the tiebreaker, he is the much better choice. 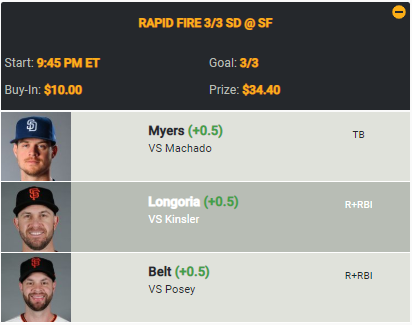