Last week was a low-scoring week, but this week there are seven games with an over/under of at least 48 on the main slate, so it should take some higher scores to take down a GPP.

Vegas has been in the business of handicapping games for decades, so when they tell us that one of the league’s top defenses will get more than 27 points put up on them, we should pay attention. Despite Seattle being ranked No. 6 in pass defense DVOA and No. 3 in run defense DVOA, the Patriots opened with an implied total of 27.5. Tom Brady leads all QBs in fantasy points per game and deflated the Seahawks to the tune of 328 yards and four TDs the last time these teams met, in Super Bowl XLIX. Gronkowski put up a 6-68-1 line in that game, and has not been held under 93 yards in four games with Brady this season, scoring in 3-of-4.

If the Patriots play well on offense, Seattle will have to keep pace through the air, and only four teams have passed the ball on a higher percentage of their plays than the Seahawks over the last three weeks (68.6%). After Jimmy Graham’s recent explosion, I think he gets the ‘shut down the top option’ treatment from Bill Belichick, leaving Baldwin as Russell Wilson’s primary target. The Patriots have been vulnerable to slot receivers this season, allowing lines of 8-81-2 to Larry Fitzgerald, 10-137 to Jarvis Landry, and even 4-56-1 to Andrew Hawkins. Baldwin has been quiet compared to last season, but is still averaging a very formidable 5.5 receptions for 71.3 yards per game. 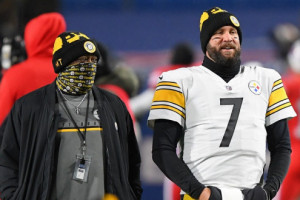 Over the last few years, the Steelers have laid enough eggs on the road to cook brunch for the entire team with, but at home, they’ve been straight money. Since 2014, Pittsburgh averages 30.8 points and 428.1 total yards at home, compared to just 21.4 points and 377.0 total yards at home. The Cowboys are a mediocre defense that lost two key contributors in their secondary in finally-arrived corner Mo Claiborne and reliable safety Barry Church, who were both top-20 players at their positions according to PFF grading. Big Ben has scored over 20 fantasy points in his last seven home games dating back to last season. Brown has averaged 111.8 yards and 1.05 TDs at home compared to 99.0 yards and 0.40 TDs on the road since 2014. And Bell has managed to be a top-five fantasy RB despite not scoring a TD yet. Averaging a WR1-esque 9.2 targets, Bell could just as well catch a TD from Big Ben. Let others fret about the few plays the Steelers may lose due to Dallas’ keepaway style, and profit from the monster upside that the quick-strike Steelers offense possesses at home. I should also note that Bell’s FanDuel price hasn’t been lower since Week 17 of 2013.

The Superdome combined with the Saints’ porous defense leads to a unique situation where the Saints actually allow more production at home than on the road. This season, they’ve allowed 34.5 points per game at home, but 9.5 less outside of the Big Easy. This stack allows you to target one of the league’s worst defenses at minimal cost. Sanders and Thomas have combined for 52.6% of Broncos targets overall and 64.6% of their targets in the red zone. Trevor Siemian’s numbers of been underwhelming to date, but we just saw Colin Kaepernick put up one of the best games of his career last week because the Saints do not tackle well and are prone to giving up long plays after the catch, which Sanders and Thomas can certainly produce.

The 49ers defense has been run through by more dudes than the Kardashian sisters, so it’s only fitting a Johnson is next. David will face a defense that has been plowed through by opposing backs for a 5.47 yard per carry clip on the season and been gutted for 170+ rushing yards for five straight weeks. It’s gotten so bad that I was tempted to add Andre Ellington to this stack, as the Niners have allowed 12+ PPR points to two RBs on the same team in three straight games. Johnson leads all RBs in fantasy points per game and his 23.9 touches per outing rank third in the league.

Both will be chalk, but stacking DJ with the Cardinals defense allows you to maximize the RB-defense correlation and roster the top plays at both positions. Defensive scoring is correlated with point spread and negatively correlated with opposing team total, and the Cardinals opened as 11.5-point favorites (it has since climbed s high as 13.5) with the 49ers implied to score a measly 18.25 points. The 49ers are third in giveaways (17) while the Cardinals are tied for fifth in takeaways (15).

Ever since the start of last season, the Titans have been a great bet to allow a ton of points of opposing DSTs. They have allowed the third most strength-of-schedule-adjusted fantasy points allowed to defenses in the league this season, and if you went with the Chargers defense last week, you already know just how giving the Titans can be. The Titans also have one of the worst special teams units in the league that ranks 27th in special teams DVOA. At 4-4 with Super Bowl aspirations, the Packers will be in desperation mode this weekend in Tennessee.

Mason Crosby, meanwhile, is in a good spot as well. The Packers have an implied total of 26 points and Crosby has attempted three field goals in four of his last five games. The Titans rank 20th in strength-of-schedule-adjusted fantasy points allowed to kickers. 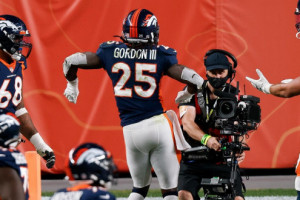 Over the past four weeks, Melvin Gordon has 118 touches. No other RB has more than 92. ON the season, Gordon leads the NFL in touches per game with 24.6, racking up more usage than known bell cows Ezekiel Elliott (24.1), David Johnson (23.9), and even Le’Veon Bell (23.8). The Chargers also feed Gordon where it matters most. He has 46 red zone carries while no other RB has more than 30, and also leads the league in carries inside the 10-yard line (24) and 5-yard line (14). This week, Gordon is in the ideal position of being a home favorite against a Dolphins defense that has been mediocre against the run — they rank 16th in run defense DVOA. Continue to ride Gordon in DFS like the Chargers are in real life.

Benjamin tried to play with a PCL sprain last week and apparently suffered a setback and will almost certainly miss this week so he can heal up through the Week 11 bye. The main beneficiaries will be Antonio Gates and Tyrell Williams. Gates has at least nine targets in each of his last three games, while Williams has 60+ yards and/or a TD in 6-of-9 games this season, with two of the failures coming against the Broncos’ elite secondary. Only three players in the entire league have more red zone targets than Gates (14), and only five have more than Williams (12). The Chargers have been in the red zone more than any team in the league this season, and with Melvin Gordon keeping the chains moving, that figures to continue this week, as the Bolts have a 26-point implied total at home against Miami.