I love Thanksgiving. Sure, you don’t get any presents, but you don’t have to buy any, either. All you do (or at least all I do) is chill, peel potatoes, drink suds, and watch football. And in the middle of it all, you eat like a king with the people that you love the most.

It might also be the best football week of the regular season. The weather is cold, the games are meaningful, and the DFS tournaments are swole. Best of all, recreational players everywhere come out of the woodwork to donk their account funds off. And who’s gonna be there to catch all that beautiful money falling from the sky? That’s right! You and me!

In addition all of the delightful drinking and gambling, Thanksgiving also gives us a stark reminder to be thankful – something I think we could all stand to do a little more in our everyday lives. Gratitude is one of the most healthy and positive qualities we possess as people, yet we forget it every day. I think we’re all guilty of taking some of the most important things in life – things such as good health, loved ones, and freedom – for granted on a daily basis.

I know I’m guilty of it. Sometimes I look right past the great things that happen to me but will give so much mental space to the most trivial of life’s inconveniences. Bad traffic or coming home to dog dookie on my carpet can completely overshadow how fortunate I am to have financial stability, a beautiful wife, and good health.

I know it’s cheeseball, but there was a time when I would start every day by writing down three things in life that I was thankful for. Sometimes they were big things, like my mom’s love and support. Sometimes they would be simple things, like having a comfortable bed to sleep in and a roof over my head every night. I started every day off with the feeling of gratitude, and as corny as it is, it made me a genuinely happier person. I honestly don’t know why I stopped.

(As always, all odds listed are accurate at time of writing, and may shift throughout the week. The Reid Option focuses exclusively on the daily fantasy football main slate.)

The DraftKings Gods have smiled down upon us this week and decide to price Lamar Jackson down to $7,000 – $600 below his average over the previous two weeks. And why? Because of a date with the elite 49ers defense. Well, Bill Belichick’s defense is elite, and Lackson pushed their bunguses in. Then he faced one of the best defensive coordinators out there in Wade Phillips, and his bungus was pushed in just the same. I think it’s safe to call L-Jax matchup-proof at this point, so take the discount and run in cash games this week.

Of course I’d be remiss as a MFer if I didn’t mention Patrick Mahomes, who’s realistic upside is probably the greatest of any player at the position this week. The Chiefs’ 30.8-point implied team total is the highest on the NFL betting lines board by a landslide, and Oakland’s defense is a sham. They’ve allowed the most air yards on completions in the NFL and the 2nd-most overall, as well as the 3rd-lowest pressure rate (19.2%) and the 5th-highest net yards per attempt (7.3). Any way you slice it, they’re a mockery and Mahomes is poised to pimp-slap them into oblivion. As such, heavy GPP shares are encouraged.

My top cheap QB this week is B.D.N. himself, Nick Foles. This has less to do with Foles himself (who is a passable fantasy QB) and more to do with the Tampa Bay Bucs, who are basically DFS Viagra: Their defense is a legitimate pass-funnel, giving up the second-fewest rushing yards in the NFL while allowing the second-most passing yards. And their offense is good enough that they usually force their opposition to keep their foot on the gas all game long, and they provide elite bring-back game stacking options with Chris Godwin and Mike Evans.

Play Christian McCaffrey, don’t be a fool. That’s the analysis there.

Jonathan Williams is shaping up to be our 2nd RB lock of the week, which is great since nobody knew who he was two weeks ago. But of course, in his first start last week he handled a workload that must have made Marlon Mack send WTF gifs to all of his friends, playing 67% of the snaps while smashing 26 rush attempts plus 3 targets. Half of that workload would be sufficient for his current pricetag, and I expect him to be the highest-owned player in cash games this week.

Fool me once, shame on you. Fool me twice, shame on me. Fool me three times, I’ll have to start selling my plasma for DFS buy-ins next week. You hear that, Miles Sanders?!? Don’t make me sell my blood, man. I need you here. You’re averaging 80% of the snaps and 16 touches per game with Jordan Howard dust, and this week you get the best possible matchup against a Dolphins team which has allowed the most rushing yards and the most rush attempts in the NFL. You don’t help me now, I say f*** you Jobu, I do it myself.

A dude who makes a really interesting GPP pivot at the Williams/Sanders price point is Kenyon Drake, who’s averaged 13.7 rushes and 6.0 targets per game as the Cards’ starting RB. If we could be assured of that kind of usage this week he would be a cash game staple, but coming out of a bye, we really can’t feel confident on how Arizona will deploy their running backs since Chase Edmonds is likely to play and David Johnson is coming off two weeks of healing. However, I think it’s worth a shot in some tournament lineups that Drake continues to be a heavily-used lead dog, particularly since most DFS owners will gravitate towards the passing options in this game.

Finally, Damien Williams appears dust, meaning that LeSean McCoy and Darrel Williams will be splitting backfield work for KC in a game where they are 10-point home favorites with a 30.8-point implied team total. It’s anyone’s guess who’s going to score the touchdowns, but I’ll likely take the side of whoever projects to be less owned in GPPs.

Davante Adams is a sick value on DraftKings, where the pricing has become so sharp that you’re dropping a kitchen knife on your own foot anytime you don’t take advantage of obvious value. Adams should legitimately be priced at $7500-$8000, since he’s 4th in the NFL in weighted opportunity rating since he returned from injury in Week 9 and has seen target totals of 15, 11, 10, and 12, good for an average of 12.0 per game. That would be good enough to be a cash game lock even if he weren’t playing a Giants team that couldn’t cover a sloth on crutches … but he is.

Of course, if you like Nick Foles (and I do), then you have to like D.J. Chark and Dede Westbrook (and I do). Since B.D.N. took over as the Jags starter, Chark is 4th in the NFL in air yards – something that simply cannot be ignored against a Tampa pass defense that has allowed the 2nd-most receptions, receiving yards, and receiving touchdowns to villain wideouts. Westbrook can be used as both a GPP pivot off of Chark (who should be quite popular) and as a solid cash game option, since he’s relatively inexpensive and is likely to see 7+ targets against an inept pass D. 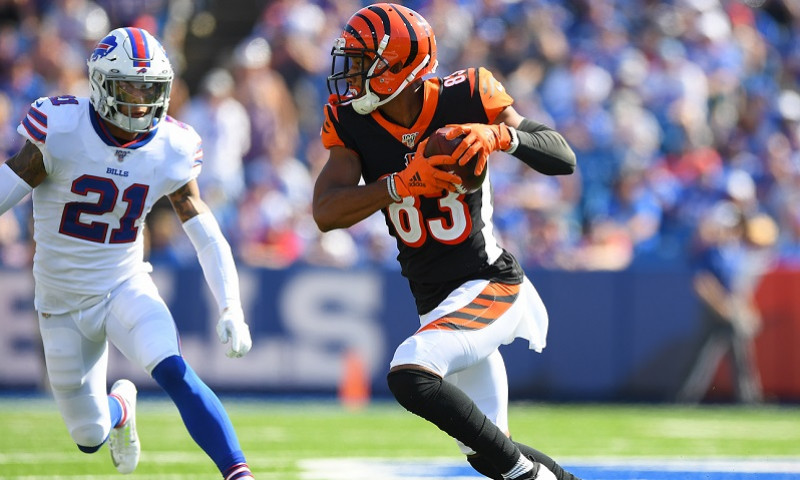 I never thought I’d say this, but the return of Andy Dalton is a big deal for the Bengals passing game. Sure, he kinda sucks, but it’s also true that he sucks a whole lot less than the puke-inducing Ryan Finley (who’s still looking for his first career 200-yard passing game), and that he provides a significant upgrade for the Bengals receivers. Specifically it means good things for Tyler Boyd, who saw 83 targets through 8 games with Dalton – the third-highest total in the NFL. It’s not often you can roster a guy with this sort of volume floor without paying through the nose, so taking advantage of it this week is advised.

I never thought that in the year of our Lord 2019 I’d be rostering DeVante Parker in consecutive weeks, but I guess I never thought I’d see a DFS proprietor tell one of the nicest guys in the DFS industry to kill himself on Twitter on Thanksgiving day either … but here we are. The reality is that Parker has 10, 10, and 11 targets since Preston Williams went down and has established himself as the clear #1 wideout on a team that constantly trails and has to throw a lot. His price tag has been appropriately inching up, but at $6K on FanDuel, it’s still plenty palatable for the production we’ve been getting.

Jack Doyle is our plug-n-play cash game tight end; he’s just $3300 on DK and professional fantasy scavenger Eric Ebron has snapped out for the season. I think it’s folly to just assume that Doyle will soak up all of Ebron’s work and become some super amalgamation of Doyle+Ebron, but we could easily see a little more time on the field (Doyle’s snap rates over the past four weeks: 77%, 60%, 65%, 69%) and another target or two. It may not sound like much, but at this price point I’d consider that a big deal.

Of course, in tournaments I’ll probably largely fade him since he’ll be really popular and probably won’t get a production bump as large as the public perceives he will. My #1 GPP tight end this week is Darren Waller, and I’m going to the felt with him. Through the season’s first 8 weeks, Waller was the NFL’s #2 TE in weighted opportunity and #1 in team target share. But starting in Week 9, Hunter Renfroe started getting more work operating in the same area of the field, averaging 5.8 targets and 48.3 receiving yards per game. In that same timeframe, Waller’s WOPR dropped to 12th among tight ends and his target share fell from 25% to 16%. Renfroe is now hurt and won’t play this week, and Oakland is a 10-point dog against an explosive KC offense, and thus should have to throw a lot. I’m all in on Waller regaining his top-end usage and I don’t think he’ll be widely owned since alpha stud George Kittle is just a few hundred more on DraftKings.

I expect the Cardinals to be popular on DraftKings, and for good reason: They’re cheap, they’re at home, and the Rams offensive line has turned to pure dust this season. However, the contrarian GPP move is to pay up for some elite, starting with the Panthers. Carolina’s 9.3% adjusted sack rate is the 3rd-highest in the NFL, and Dwayne Haskins has suffered 13 sacks in 3 starts since taking over as Washington’s starting QB. The Panthers are favored by 10 points here, and they are going to have myriad opportunities to take advantage of Haskins’ egregious mistakes.

Philly at Miami is going to be another popular play, but my pivot at this price point is going to be to the Pittsburgh Steelers. I’m all in on that helmet smash revenge narrative, but I also love the O-line vs D-line mismatch here; the Steelers have the league’s 2nd-highest pressure rate (30.7%) and the 2nd-high adjusted sack rate (9.5%). Meanwhile Cleveland has one of the weaker offensive lines in the league, ranking in the bottom half in pretty much every metric, from adjusted sack rate to adjusted line yards. I think it’s high time I started taking advantage of the Browns’ offensive disfunction, and that starts this week in Pittsburgh.

Thanks for reading, everyone! Let’s go make some money in Week 13.