Zack Godley (+.5) vs Joe Musgrove: Total Strikeouts: Looking at the numbers here, this was the toughest one of these three props. We don’t have a huge sample size for a lot of these batters, but they look to have a similar K rate to RHP. Looking at the pitchers themselves is where I came to the decision to go with Godley. Last year, Godley owned a 23.4% K rate compared to Musgrove and his 20.6% K rate. While Godley does have a higher walk rate and may not go as late into the game, he is getting the tiebreaker along with the higher K rate. Roll with Godley.

Adam Frazier (+.5) vs Christian Walker: Total Runs/RBIs: This one was a pretty simple one. Frazier is playing on the team with an implied run total of 4 compared to a 3.5 total for the Diamondbacks. Frazier is the better hitter (even though Walker has better numbers, he doesn’t have a big enough sample size) and is batting leadoff. The total run line for this game is set at 7.5, so it’s pretty reasonable to think that Walker will not end up with a single run/RBI here. Fraizer wins this prop 70% of the time.

Eduardo Escobar (+.5) vs Jung-Ho Kang: Total Bases: This one’s another easy one. We don’t have a big sample size of Kang, but most projection systems have him projected as a league average hitter with a .330 wOBA with a slightly above average ISO. Escobar, on the other hand, is a switch hitter who is much better batting from the left side of the plate. He does get the tougher matchup vs. Musgrove, but he is the better hitter, owning a .255 ISO and .359 wOBA vs. RHP last year. Add in that he owns the tiebreaker in this prop and he’s a lock and load. 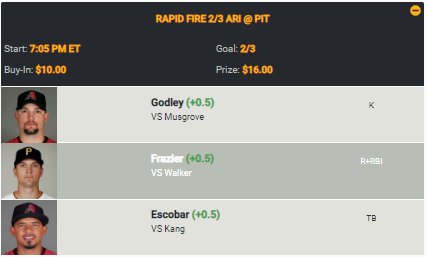 Matt Harvey (+1.5) vs J.A. Happ: Total Strikeouts: Let me say first off that Matt Harvey is trash and may get beat up in this matchup, but he is the better pick. He’s getting 1.5 free strikeouts and should end up with the same amount of Ks as Happ does. Since the beginning of last year, Harvey owns a 19.3% K rate to Happ’s 25.6% K rate. The big difference here, however, is that Happ gets a matchup against a team with an 18.3% K rate (most of which is Bourjos batting 8th who likely is a better hitter against LHP than that), while Harvey gets a matchup vs. a decent K lineup in the Yankees. If Harvey was getting .5 free Ks, I’d still probably roll with him, so 1.5 makes him a lock.

Mike Trout (+.5) vs Luke Voit: Total Bases: Voit has been good this year and gets the better matchup, but this is Mike Trout and he’s getting the tiebreaker. There is nothing to think about here. Trout is the best hitter in baseball, is getting the platoon split, owns an insane .500 ISO and .518 wOBA this year, and Happ is coming into this matchup in bad form. Just take Trout and move on.

Jack Flaherty vs. Adrian Houser (+.5): Total Strikeouts: We don’t have a huge sample size for Adrian Houser, but he’s making his first career start here and profiles as a below average K guy. On the other side, we have Flaherty, who is a 29.3% K rate guy and is facing an average K rate Brewers team. There are so many things that could happen to Houser here. He may only go a few innings, he may get blown up and pulled very early, he may pitch decently but not strike out many guys, but in all these scenarios he doesn’t win this prop. Pick Flaherty in this spot.

Christian Yelich vs Matt Carpenter (+.5): Total Bases: I don’t generally like giving up the tiebreaker on these props, but Yelich is on a whole different level right now than Carpenter. Currently on the season, Yelich owns a .541 ISO and .580 wOBA vs. RHP compared to Carpenter’s .194 ISO and .312 wOBA. If you don’t believe in hot streaks, you can disregard this, but chances are that Yelich is hitting a bomb here.

Marcell Ozuna (+.5) vs Paul Goldschmidt: Total Runs/RBIs: This one simply comes down to the fact that Ozuna is tearing the cover off the ball and is getting the tiebreaker. Runs/RBIs is a very volatile category and any given day, as the most likely outcome is that any hitter will end up with zero. Ozuna owns a .367 ISO and .440 wOBA vs RHP this year compared to Goldschmidt’s .347 ISO and .413 wOBA. Ozuna wins this 70% of the time in this situation. 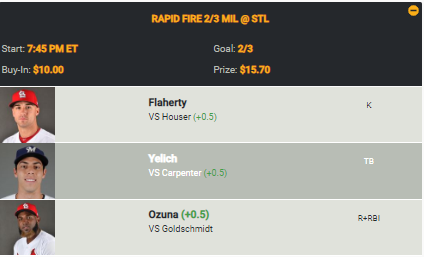