Four games opened with totals of 50 or higher this week, and although some of those totals have since dropped a point or two, there are still a lot of games with good fantasy upside. This is the part of the season when we start to see players who are underperforming regress to the mean. We saw it last week with Odell Beckham posting a two-TD game, Rob Gronkowski going for his second straight 100-yard game, and Lamar Miller finally getting into the end zone, among others. There are a few more players that I think will experience some positive regression this week and they’re featured in my first two stacks.

The Packers have what my dude Adam Levitan calls a “funnel defense”: they have allowed 3.0 yards per carry (best in the NFL), but 8.3 yards per pass attempt (28th). Don’t look now, but Brian Hoyer has thrown for 300+ yards in four straight games.

Hoyer’s favorite place to go with the ball has been the WR spot opposite Jeffery; Kevin White and Meredith have been on the field almost exclusively without the other, and have combined for 71 targets, which would lead the NFL. Meredith’s 27 targets over the last two weeks does in fact lead the NFL, and he has produced over 100 yards in both of those games.

Jeffery’s 44 targets rank a disappointing 27th, but he did receive 13 targets last week and is off the injury report for the first time since Hoyer became the starter. Alshon has been producing when the ball comes his way, as his 11.07 yards per targets ranks fifth of 81 players with a minimum of 30 targets this season. The 6-foot-4, 230-pound Jeffery is unlikely to stay stuck on zero TDs much longer, and is a good bet to notch his first of the year against a Packers defense allowing the fifth highest TD rate to WRs (7.8% of targets). 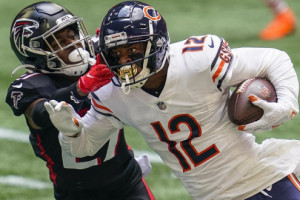 Bortles and Robinson have gotten off to a rocky start this season, but that could all change against a Raiders defense ranked 28th in pass defense DVOA that will have to travel across the country for an early start.The Jaguars’ implied total of 24.5 this week is over 4.5 points higher than their seasonal point-per-game average of 20.2. Despite lackluster production to date in 2016, we know Robinson is one of the most talented WRs in the league, and he’s getting the requisite usage to resume being a fantasy beast. Robinson is averaging 9.4 targets per game, good for a 25% target market share. His market share increases to 29% in the red zone and 50% inside the 10. If Robinson plays up to his talent level, Bortles should have a good game against a Raiders defense that has already allowed three games of 359+ passing yards and 3+ TDs.

Opposing passing games are relatively strongly correlated, and if Bortles and Robinson get going, the Raiders are going to have to air it out. Cooper is tied for sixth in the NFL with 10.0 targets per game while the Jaguars are allowing the seventh most receptions to WRs (14.8) and rank 21st in DVOA to No. 1 WRs.

The 49ers average the fewest seconds between offensive plays (24.04), but they suck, so they also average the fewest yards per drive (22.5) and therefore, the quickest drives (2:01). What this has done is allow opposing offenses to run the third-most plays per game (69.5) in the league against Chip Kelly’s defense. This is great news for Tampa Bay, a team that ranks second in the league at 70.6 offensive plays per game.

I’ll talk more about Rodgers later on, but just know he received 35 touches in his last game and the 49ers have allowed five straight 100-yard rushers.

Evans already leads the NFL in targets per game (12.0) and averaged even more (12.5) in the six games Vincent Jackson (injured reserve – ACL) missed last season. Evans isn’t just getting empty targets, either — he is second in the NFL in targets 15+ yards downfield (22) and leads his team in red zone target market share (31.8%). The 49ers allowed the second most TDs to WRs (10) and rank dead last in DVOA versus No. 1 WRs. They’ve allowed at least one TD to a No. 1 WR in five straight games. With Evans a threat to score multiple times and the high volume of plays the Buccaneers are likely to run, Winston could easily get back on track and post his third 3+ TD game of the year.

Murray enters a Week 7 tilt with the Colts ranked third among RBs in touches per game (23.0). He has handled at least 21 touches in four straight games while playing 95% of snaps in two of his last three. The Colts defense is dead last in rush defense DVOA and ranks in the bottom-five against RBs in a litany of categories, including yards per touch (6.1, 32nd), total yards per game (167.5, 29th), and total TDs per game (1.5, tied-29th). DFS players should take note anytime a team’s Vegas implied total is far greater than a team’s usual output, and the Titans’ implied total is above 25 despite the team averaging only 20 points per game thus far. Murray has scored 40% of the Titans’ offensive TDs and is in a prime spot for a multi-TD game.

The Colts’ well-documented struggles in pass protection make them a perfect opponent to target with the Titans defense. The Colts lead the league in sacks taken (23), while the Titans are coming off back-to-back six-sack games. Furthermore, Andrew Luck averages 1.17 interceptions in 30 career road games, far higher than his .77 mark in 31 home games.

Kicker-defense is an underrated stack that actually appeared in the winning Sunday Million lineup last week. The Vegas odds are favorable for both positions, as the Bengals opened as 10-point home favorites against the Browns and have a robust implied total of 28. The high implied total is a positive for Nugent, as kicker scoring is directly correlated with Vegas implied totals. The Bengals defense should have some extra motivation this week, as the Super Bowl hopeful team is currently sitting at 2-4 and desperate for a win. The fact that the Browns’ best offensive player, Terrelle Pryor, is banged up and may not even play helps the cause. 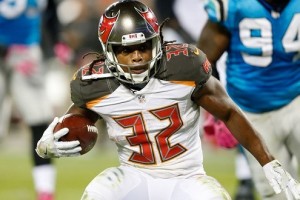 The average NFL team allows its RB to handle 20 touches just under 40% of the time, but Koetter did so at a 56% clip last season, and gave Jacquizz Rodgers 35 touches last week in Carolina. Featuring more holes than a golf course, the 49ers’ run defense has allowed a 100-yard rusher in five straight games, including a 130-yard rusher in each of its last three games. The 49ers rank 28th in rush defense DVOA and 30th in yards per carry allowed to RBs (5.1).

Allen exited last Sunday night’s meltdown against the Texans with an ankle injury and is considered week-to-week, opening up the door for Jack Doyle to assume No. 1 TE duties for the Colts. After playing 89% of the snaps last week, Doyle’s snap rate should approach 100% against the Titans the Sunday. Colts offensive coordinator Rob Chudzinski and QB Andrew Luck are known to favor the TE — only three teams have more receptions by TEs than the Colts this season. Thirty-one percent of Luck’s career TD passes have gone to TEs, and Doyle has already accounted for three of Luck’s 11 TD tosses this season despite Allen being in the fold.