I hope you enjoy it, and I hope it helps you think about today’s MLB plays in a new way as you build your DFS lineups. Here are 10 Notes for Tuesday, August 13th.

1. Since 2017, Chris Sale has 42 games of 10+ strikeouts (tied with Max Scherzer for most in MLB). That’s more double-digit strikeout games than Justin Verlander (26) and Stephen Strasburg (15) combined. The player with next-most (after Sale and Scherzer) is Jacob deGrom, with 29 such games; you can add Blake Snell’s 13 games of 10+ strikeouts to match Sale’s 42 games. After a couple rough outings against the Yankees, Sale reminded us in his most recent start that he is who we thought he was, as he popped off a 13-strikeout, zero-walk gem against of the the lowest strikeout teams in MLB in the Angels. Oh, and by the way: it appears that Sale is just terrible against the 2019 Yankees. His current ERA is a bloated 4.41, but if you eliminate his four starts against the Yankees, his ERA drops to a much more palatable 3.52. On Tuesday, Sale doesn’t face the Yankees, but his matchup still isn’t a cakewalk; over the last 30 days, the Indians have a .309 team average against lefties, second in MLB only to (guess who) the Yankees. Because of his recent “struggles,” Sale is priced down across the industry from where he’s been during his peak stretches ($10,500 at FD; $10,700 at DK; $51 at Yahoo). It’s a clear buying opportunity, even despite the tough matchup.

A 24.7 percent HR/FB rate, even for a guy like Boyd who has historically allowed plenty of hard-hit fly balls, is nowhere near sustainable, and it’s the main driver for Boyd’s high ERA as of late. It’s worth noting that even during this rough stretch (ERA-wise, at least), Boyd is striking out 29.9 percent of batters, and his 1.05 WHIP is also impressive. It’s all about limiting home runs for Boyd, and it’s something that he should do a better job of once this stretch of bad luck evens out. Given that the Mariners strike out more than any other team in MLB against left-handed pitching (26.4%), Boyd should fall on the high end of his range of outcomes in strikeouts. He’s got 15 games of 8+ strikeouts this year (only Gerrit Cole, Justin Verlander, and Max Scherzer have more), and he should have no problem reaching that mark again tonight. (Quick Yahoo note: Boyd is $40, just a few bucks more than guys like Chase Anderson and Jordan Yamamoto. If you’re playing at Yahoo, Boyd is the best point-per-dollar pitcher on the slate, hands down).

3. Prior to 2019, Lance Lynn would not be a name tossed around in the same conversation as guys like Chris Sale and Clayton Kershaw. But in 2019, Lynn has reached double-digit strikeouts in six of his 24 starts, or once every four outings. For context, he had six combined games of 10+ strikeouts over 159 starts, or once every 26.5 starts. Lynn has given his strikeouts a jolt, as they’re all the way up to 27.7 percent this year while nearly cutting his walks in half (10.9% BB rate in 2018; 5.9% in 2019). He’s done it (in spite of going to a much worse hitter’s park) by decreasing the usage of an ineffective sinker (down from 32.5 percent usage in 2018 to 17.5 percent usage this year) in favor of a much more effective four-seamer, which he’s throwing over 50 percent of the time in 2019. It’s a pitch that he should have success with against the Blue Jays, who own a .338 wOBA against right-handed four-seamers, which ranks 24th in MLB. Lynn’s DraftKings price tag ($11,300) makes him a tough ask, but at a more reasonable $10,300 at FanDuel and $49 at Yahoo, he’s a tournament play who should garner very low ownership on a slate crowded with good pitching options. 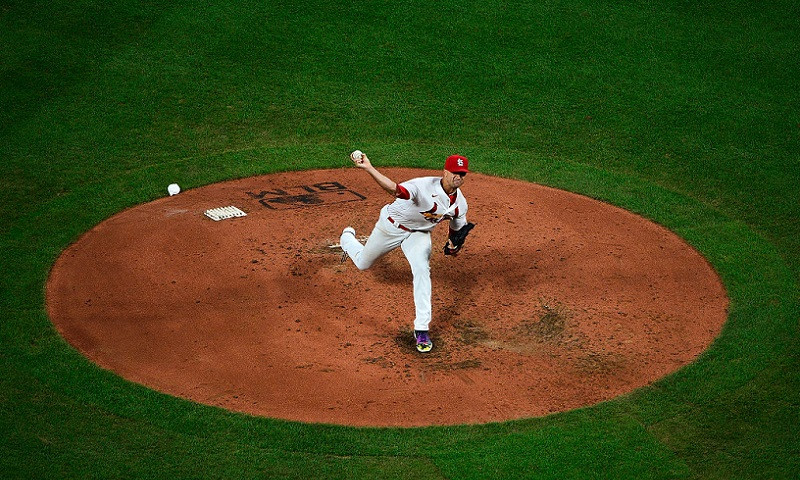 4. The Kansas City Royals have a .241 xwOBA against right-handed sliders, the second-worst mark in MLB; the slider happens to be Jack Flaherty’s bread and butter. He throws the pitch a healthy 27 percent of the time. Here’s how the Royals individual hitters for Tuesday’s projected lineup stack up against the pitch, per PlateIQ:

Flaherty has looked pretty close to elite over his past half dozen starts. Since July 7th, Flaherty has a 0.94 ERA (third-best in MLB over that stretch), a 34.3 percent K rate (fifth-best), a .192 wOBA allowed (second-best), and a 15.5 percent swinging-strike rate (eighth-best). He should be above $10,000 at both sites, but he’s $9,000 at DraftKings and $8,900 at FanDuel, making him a great option if you want to drop down below the upper tier at pitcher.

5. Domingo German has a 13.9 percent swinging-strike rate and a 26.5 percent strikeout rate since 2018, making him one of only 11 pitchers in MLB (min. 180 IP) to post that combination. The company he’s keeping on the list – Scherzer, deGrom, Sale, Cole, Verlander, Snell, Paxton, Corbin, Paxton, Carrasco, Maeda – consists of some of the top strikeout artists in MLB. German has always been able to get hitters to whiff, but the results have been inconsistent. On Tuesday, the results should be there; he’s a -300 favorite at home against the woeful Orioles. Pitch count continues to be an issue with German – he’s only eclipsed the 100-pitch mark once this season – but he should be able to limit the runs, and 6-8 strikeouts seems like a given against this offense. He’s more of a low-owned play if you’re building lots of tournament lineups, but given his elite swing-and-miss stuff, the upside is clearly there with German.

6. Gary Sanchez is carrying a .500+ slugging percentage for the third year of his career, and he’s only 26; the only other catchers with three such seasons before turning 27 are Mike Piazza, Johnny Bench, and Rudy York. He’s a free square at Yahoo at $10 (and so are Gleyber Torres at $14 and Aaron Judge at $17). It also won’t hurt that Sanchez hasn’t had any problems with the changeup, which is John Means’ best pitch (and one he throws 36 percent of the time to right-handers); since 2016, Sanchez has a .357 ISO against left-handed changeups, which is fifth-best in MLB (min. 50 BBEs), trailing only Mike Trout, Nelson Cruz, J.D. Martinez, and Eugenio Suarez. The great matchup doesn’t stop with Means; Sanchez will get at least a couple plate appearances against a bullpen that is still allowing more homers than any other bullpen ever, with a 2.1 HR/9. Paying top dollar for a catcher is always a tough pill to swallow, but Sanchez (and any other Yankees you get get) is a building block on Tuesday’s slate.

7. Since 2018, only one hitter in MLB has a sub-12.0 percent strikeout rate and a .287+ ISO against left-handed pitching: Manny Machado. He faces Brendan McKay, who has shown tons of promise after being a highly regarded prospect. But McKay has been vulnerable to righty power (2.42 HR/9). The fact that the game takes place at PetCo Park obviously hurts Machado, but sometimes in DFS, you just have to throw park factors out the window when a player is underpriced. For his contact and power combo when he has the platoon advantage, Machado is simply too cheap at DK at $4,100. 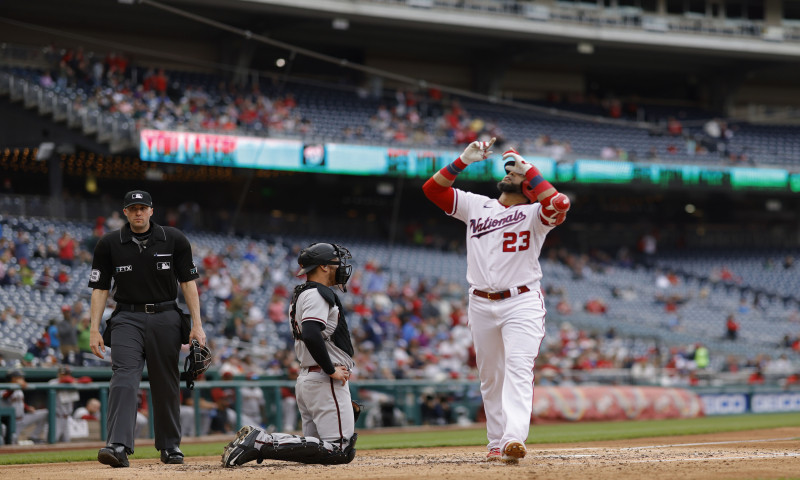 8. Chase Anderson has always been a reverse splits pitcher, but this year, his splits are especially crazy. Check it out:

The Twins have a tendency to go lefty-heavy when facing a right-handed pitcher, and according to PlateIQ, Anderson may face a lineup of eight lefties on Tuesday. (It’s also worth noting that the only righty in the projected lineup, Miguel Sano, is certainly a power threat but also has a 36 percent K rate against righties this year). All this to say…despite their implied run total above 5.0 runs, I want no part of the Twins on Tuesday (not to mention that Anderson makes some sense as a sneaky SP2 given his splits).

9. Since 2018, two Cubs rank in the top three in terms of wRC+ against left-handed pitching: Kris Bryant (194 wRC+, ranked 1st) and Nicholas Castellanos (176, ranked 3rd). For context, J.D. Martinez ranks between then, and Nolan Arenado, Nelson Cruz, Mike Trout, Giancarlo Stanton, and Aaron Judge round out the top 8. It doesn’t feel like either get discussed enough in terms of their ability to mash with the platoon advantage. On Tuesday, they’ve got a favorable matchup against Phillies soft-tossing lefty Jason Vargas. The Cubs have a high 5.17 implied run total, and with all the great hitting spots, it feels like they’ll go very underowned. A mini-stack of Bryant and Castellanos (particularly at FanDuel, where both seem underpriced at $3,800 and $3,500, respectively) makes a lot of sense in GPPs.

10. Only two hitters in MLB this year (min. 80 PA) have a .400+ ISO and 53 percent hard hits against left-handed pitching: one of the OG lefty mashers in Nelson Cruz and Pete Alonso. Overall, Alonso is one of only six rookies in MLB history to bash 38 home runs…and it’s only August 13th. Here’s the full list, per the Play Index at Baseball Reference (and judging by the last four guys, Alonso seems well on his way to a Rookie of the Year award):